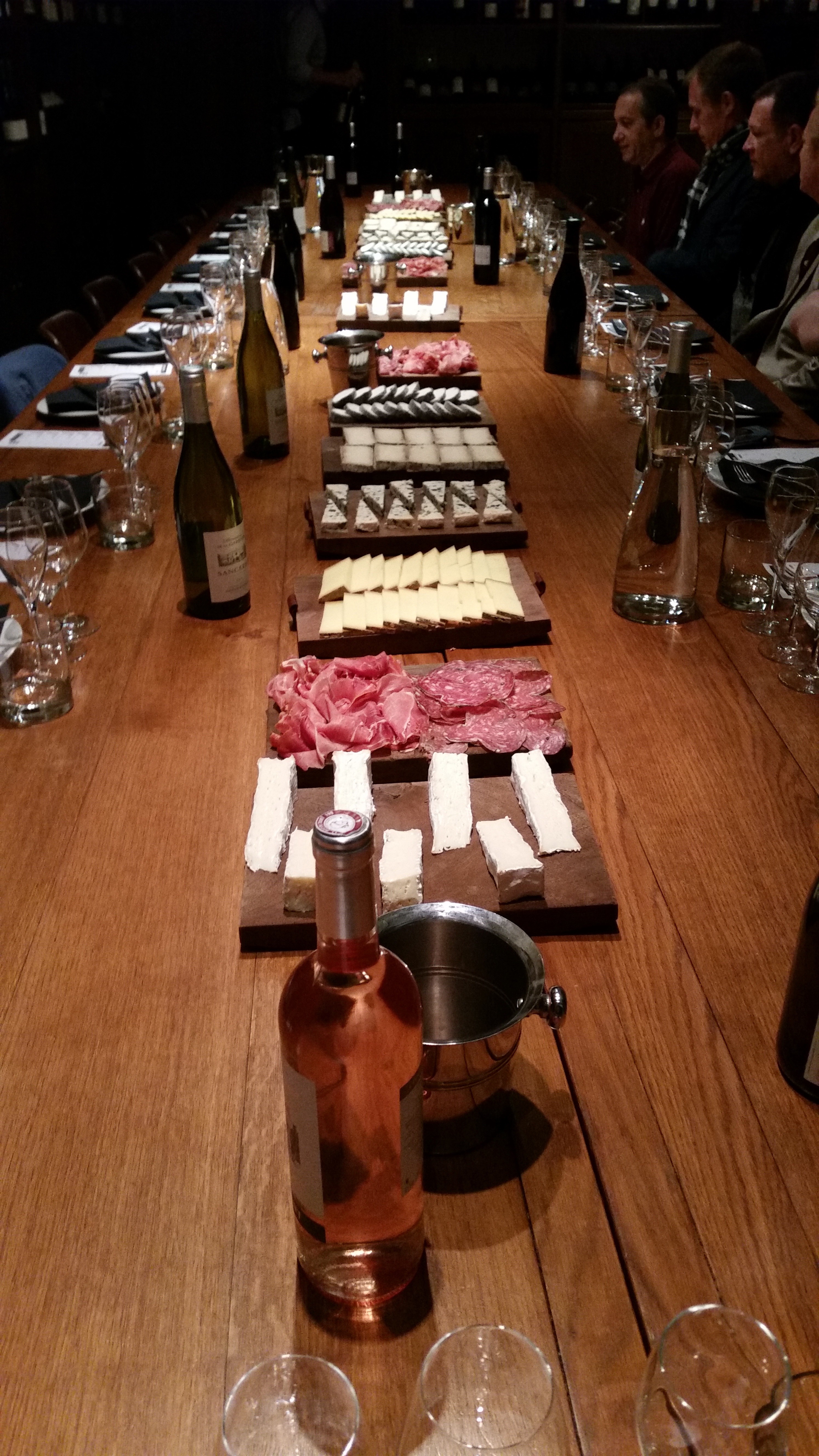 Mummy and Ms. Sandra Barnes attended a fabulous wine and cheese tasting class today in the posh 1st arrondissement of Paris, France.  There were 20 people attending the class, all seated at one large farm table, nicely set with dinnerware and several assorted wine glasses at each place setting.  Down the center of the table were large platters of  various cheeses and charcuterie along with baskets of fresh french bread.  As the sommelier addressed the class he would pour each person a glass of the chosen wine and indicate the preferred cheese that went with that wine.  The object was for the participants at the table to take the platters from the center of the table, get some cheese and bread…and pass them to the people next to them…and sample the cheese and wine together.  This did not work as planned for Mummy and Ms. Sandra….because the couple they were seated next to REFUSED  to pass ANYTHING.  EVERYTHING STOPPED in front of them.  Mummy and Ms. Sandra had to ASK for every single thing…for the entire class.  The cheese, the bread, the water, the jam…. everything.  This couple sat every plate that came by in front of them like they were the only ones at the table…and there were 20 people  there!!!!  All waiting on platters to be passed.  It was the craziest thing!!!! If you are ever in a class with people like this..sit at the other end of the table…far away from them!!!  Just saying.

Well, this just confirms what the majority of the world says about how some of the French aren’t very hospitable. Thanks for the heads up if I ever make it to France!

Karry….they weren’t FRENCH…sorry but they were AMERICANS….they were tourists just like Mummy and Ms. Sandra!!! I won’t say which state they were from…I don’t want to start up anythng…but I’m ashamed to say they were our own people! 🙁 The French people here have been nothing but super hospitable…very helpful with our language barrier…and thankfully know much more English than we know French. Not one single problem with the French people…so very nice! 🙂

Pretty nice post. I just stumbled upon your weblog and wished tosay that I have truly enjoyed browsing your blog posts. In any case I will be subbcrising to your feed and I hope you write again very soon! January 29, 2013

Oh Kerry! They were Americans! In fact, all of the attendees were american except for one French couple. I guess these people were just VERY hungry! Lol!

not very nice not to pass the platters around they should certainly have been able to see everyone else doing that? Despite the uncouth couple I hope your Mummy and Ms Sandra enjoyed the wine and cheese and brought a nibble home for you and Bri!!!

Sounds like Okies to me…… 🙂 just sayin’ from experience…..

OH my gosh! Well should have known they were from America, I swear some people just have no manners! Hope yall got enough to eat and drink!

Sorry to hear that people from the U S were so rude. Probably Millie should have nip their heels to get their attention to their rudeness.

That is o e of the most fabulous looking wine tasting displays I’ve seen! And love on the farm table. I agree Darcy, have always had the best experiences with the French. Never understood what everyone complains about. Btw, may Moxie and I come next time?? Millie doesn’t mind being left in the apt since it’s not home? xo

My husband and I have been embarrassed more than once by our own fellow Americans while traveling in other countries. What a shame.

We need to really try and do a better job to behave better when we are guests in someone else’s country!!!!

This was interesting I guess it would have been rude for you to stand up and say (PASS THE TRAY) huh think they would have listened? Probably not!? They didn’t they think they were being rude!
You do know I was kidding!