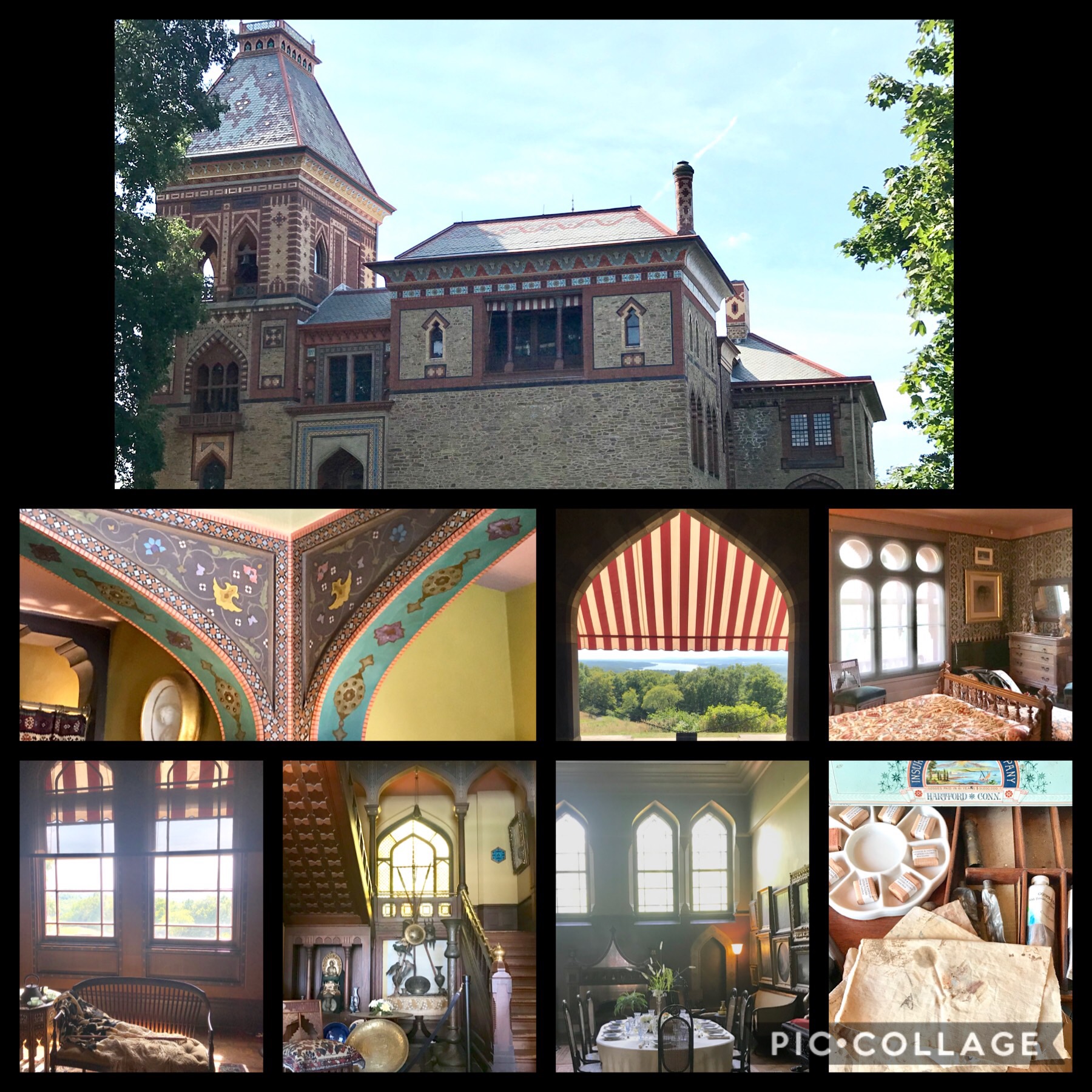 Mummy and Daddy did more than just enjoy the WOODSTOCK scene while here in the Hudson Valley… they also found a few historical houses to tour, like OLANA. This fantastic house is located in Greenport, New York… high up on a hill overlooking a beautiful landscape. It was built by the famous landscape artist Frederic Edwin Church and his wife Isabel between 1870 and 1872. It is built in the Victorian style but with definite Persian decorative motifs. The Middle-Eastern elements were carried out in colored brick, slate and ceramic tile and especially stenciling. The cornices of separate sections are each ornamented with multi-colored and gilt stenciling… the patterns designed by Church himself. They loved the Middle East and gave the place the name “OLANA” which is a Middle Eastern name. They spent time in other places but this was their main residence.

Back in the early years, Church found this lovely spot of land with 126-acres and purchased it for him and his wife. He built a 10-acre pond, an artist’s studio and a small cottage for them to live, which they called, “Cosy Cottage.” He and Isabel had two children… a son in 1862 and a daughter in 1865, and in March of 1865, both of them died from diphtheria… changing their happy lived forever. They traveled with some friends to Jamaica to try and get away from things for 4 months… then went to Vermont to continue their grieving. Late in the year they returned to “Cosy Cottage” to try and start their lives again. In the fall of 1866, their son Frederic Joseph was born, the first of 3 sons and a daughter who would live to adulthood at OLANA.

In 1867 they bought more land at the top of the hill and began planning their large home for the site. It is a fascinating house to tour and definitely ONE-OF-A-KIND! After the Church’s passed away, their son Louis and his wife moved into the house… when they died, the house and all of the land was passed to a nephew who intended to sell it to developers at a public auction. Someone doing a thesis paper just HAPPENED to stop by the estate to ask a few questions and heard about the sale. He begged them to please hold off for a few days until he could gather a few people together to possibly BUY the estate. Lots of people got involved, a LIFE MAGAZINE article was written, and the estate was saved!!!   It is one of the few intact artist’s home-studio-estate-complexes in the USA today and was designated a National Historic Landmark in 1965 and opened to the public in 1966. The interior remains almost as it was during Church’s lifetime, furnished with objects collected during his world travels. It is decorated with stencils all over the walls, around the doors and across the ceilings. There are so many items i  the house that it is difficult to take them all in!!! The tour guide said only HALF of what they actually owned is displayed in the house!!! She said that during Victorian times, it was the “style” to put out EVERYTHING that you owned because this was how to let people know how successful you were… by how much “stuff” you had!

If you ever find yourself in this area… this is a house you need to see. It is totally different from all of the gilded, marble mansions that we have posted up until now but the artistic designs are something you will want to see.

If you are going through Thousand Islands, NY, be sure to see Boldt Castle. It’s beautiful and the area is gorgeous! We stayed at Swan Bay RV park in Alexandria Bay, NY.

Ohhhhh Mummy and Daddy saw that a few years ago and LOVED IT! ❤️❤️❤️❤️

Thank you… it was a beautiful area and we are leaving today and heading for Pennsylvania.

Sounds like a super cool house… that would be perfect if little doggies like us were allowed inside too!!!! Thank you for sharing your most excellent vacation with us! Bet they served wine and lobster!!!!

Good Afternoon ,
It sounds like another beautiful place that Mummy and Daddy were able to visit. Maybe Millie you and your sisters will be able to go more places in PA. Even though I live in Tampa now I was born and raised in Watertown, N.Y. which is near Alex Bay where you all visited a few years back. I used to go to the Bay all the time and loved Boldt Castle. Enjoy your adventures today and be safe.

It was really pretty… we will be visiting an ELEPHANT SHOP tomorrow so we are excited about that!

Hi Millie
Sounds like another busy day for the clan. The castle seems lovely and the decor very unique.
So off to PA. There will be a lot of history there as well.
Hope the weather is cooling down. It’s be so hot for you babies so far
I a super day.
Hugs and Kisses to all
Oliver and mommy

We are going to see Mr Ed’s Elephant Museum tomorrow where we are meeting up with a few friends! ?❤️??

Thank you very much! I hope you can see it in person one day! It is fantastic to see the paintings and the artistry on the walls and decor!

Millie LaRue I take it this was not a Furbaby Friendly place either? But this was an Amazing story. I Loved the Photos as well. So interesting these Historical places are. I truly enjoyed this one. Stay Safe and on with your Adventures.

No… no furbabies allowed here either. Hardly any Historical places will let us in… only the one place we posted on earlier let up in. Most places don’t even allow baby strollers!!!

What a beautiful mansion. Thank you for telling us about the history. Safe travels

Thank you. I hope lots of our friends get to visit some of these places one day. ??

Beautiful! Wish more houses were built like this now! ???

I know!!!! Even a tiny version of this would be a masterpiece!

Well Millie I’m learning so much history from your travels. I really enjoy reading and following long. Maybe one year you will visit Vermont where I have moved a few months ago. There is so much to see here. The mansion is beautiful. I love historic old houses.

Ohhhh we wanted to come to Vermont but the trip had gotten so long that we just couldn’t fit in another state… but we do plan to get back up and do that state too! ??

I dont think this family had any doggies… Mummy always looks around for signs of a little doggie somewhere!!! ???

It was a very interesting house and totally different from all the others my parents have seen so far! Definitely worth taking a look at, just to see the art work!!! ?❤️?

What a beautiful mansion. The exterior is amazing, but I especially love the decorative art work on the arched doorways. Thank you for sharing this wonderful history in our country!

Ohhhh the inside was fantastic with stenciling around every doorway, on the doors and ceilings… the walls… everywhere!!!

Such wonderful house adventures. So beautiful each one has its own personality.,

I am glad that they have been saved and people can tour them.. Was this mansion

It was quite beautiful but sadly doggies were not allowed. You could not even take a baby stroller inside for fear of knocking something over!!!! There was only one place where we WERE ALLOWED… if you scroll back thru our posts, we visited COGSWELL’S GRANT. … and they are doggie friendly!

What a fabulous house.

Oh Judy, our parents said it was such a unique house!!! I hope that you can see it one day. ??

Thank you for sharing your vacation with us. I love all the pictures.

Thank you for following us this summer… we are so
Glad that you are enjoying our posts. ?❤️?

It was so different from the other mansions that my parents have toured this summer. The art work was just gorgeous! ?❤️?

Thank u for sharing the story of Cozy Cottage. So glad it had a happy ending and everything was saved and us now on display. I enjoyed seeing a different style of mansion and hearing about the art factor. Y’all be careful as you head to Pennsylvania and I look forward to hearing about that great state.

You are welcome?? I hope that maybe you can see it one day. Allof the art work was so beautiful!

THIS PLACE LOOKS AND SOUNDS BEAUTIFUL. LOVE WHAT THEY DID TO SAVE THIS MANSION. WAS SO WORTH ALL.
AGAIN THANK YOU SO MUCH.

Yes…. and it came so close to all being sold off! I hope that you can see it one day. ?❤️?

Very colorful house! Sad that they lost their children! What’s up with no doggies???

We didn’t see that but I believe it is still there and being used for other purposes. But it was not part of the tour.

ohhhhhhhhh this one would appeal to my artistic side…… I’m sure it would inspire my crafting! So many beautiful places it’s a shame you can’t go in even in your stroller…. you are such sweet girls….. I understand though not all doggies are so well behaved so I guess they ban all of them :'(

Well, they won’t even let a human baby come in a stroller!!! Strollers are BANNED because they ate too bulky and will knock things over and break stuff. We understand the rules and actually enjoy getting time off every so often to take naps. Daddy has volunteered to stay behind and take naps with us! ????

Such a lovely home. Isn’t it amazing how these homes endure the passage of time? Thank you for sharing your travels Millie.

Oh yes… the homes were definitely built with quality materials and when the people REALLY TOOK PRIDE in their craftsmanship!!!