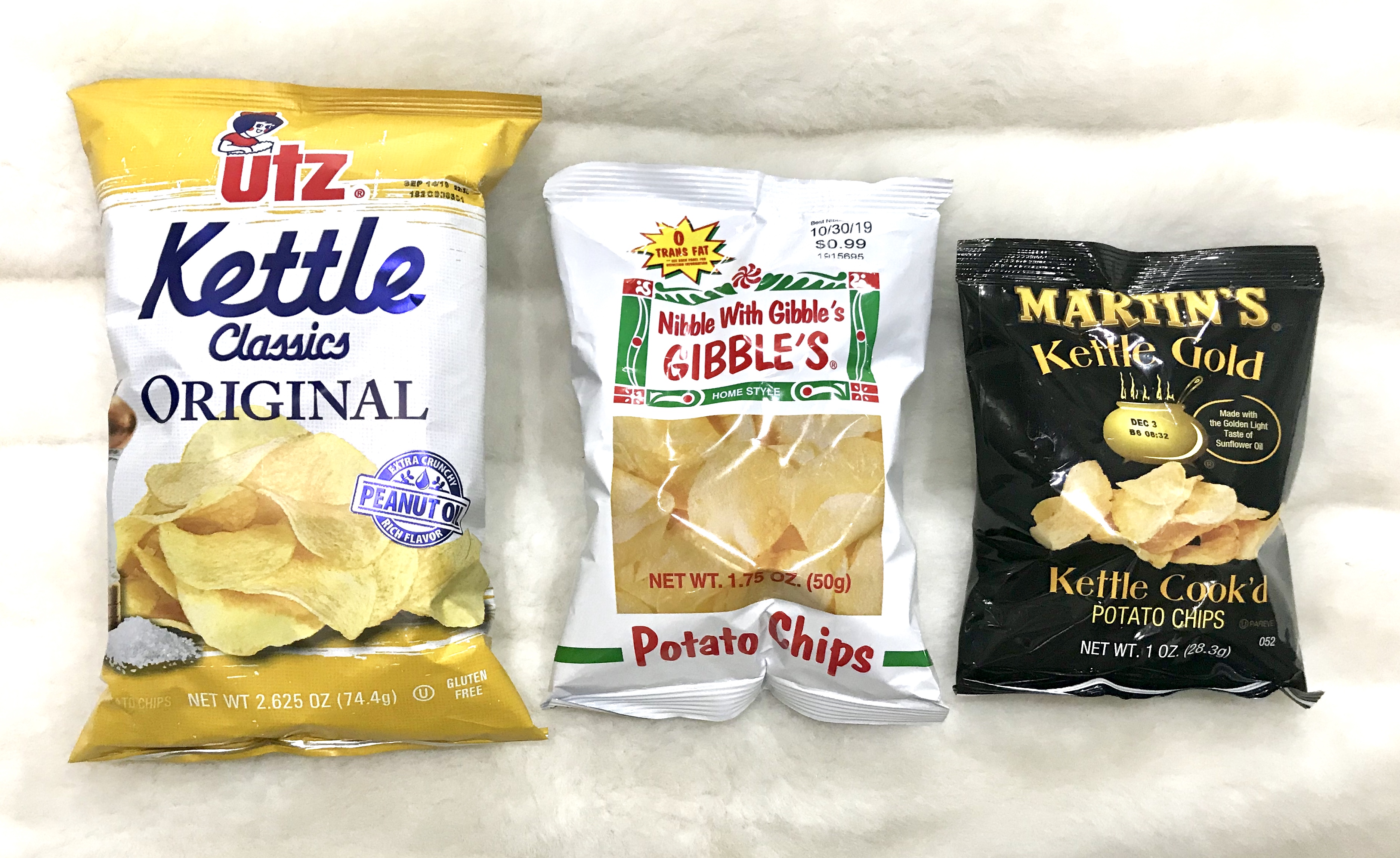 Before we left Pennsylvania, our friend ms Susan gave us some sample bags of the THREE TOP BRANDS of potato chips that are MADE IN PENNSYLVANIA… well my goodness, it looks like another TASTE TEST was in order to see which chip was deemed THE BEST CHIP OF PENNSYLVANIA, according to our parents. ???

Mummy set out one chip from each bag so that Daddy could look at each one, but he had no idea which was which… then he slowly sampled a small bite from each chip. He took a second bite to make sure he got a good taste. He made his decision but didn’t tell Mummy. Then she tasted her chips. She obviously knew which ones were which but that part couldn’t be helped.

Here were the results:

THE MARTIN’S CHIPS WERE THE WINNER, according to this taste test. But MUMMY SAYS that UTZ is better and she bought some of their SWEET SOUTHERN HEAT BBQ CHIPS and said they were OUTSTANDING! But maybe you should buy all of them and do your own taste test! ??

This has been a really fun trip. Thanks for taking us along! ❤

Thank you ms Lynn! We only have one more week left of our trip but that is plenty of time for exciting adventures. We are going to visit our relatives next week! YIPPEE ??

We have had a fun trip and Mummy and Daddy have spiced things up With these TASTE TESTS! ???

I love doing taste tests. I recently did one with an ice cream stand here in Vermont that makes homemade ice cream from an all natural dairy . All were delicious but the winner for me was the Maine Blackbear, vanilla ice cream with fresh Maine blueberries and chunks of dark chocolate. Yum! Thanks Mille for the testing result! I personally love Utz.

I want to do that taste test! LOL

Yes, I do love taste test. And love potato chips!

Mummy and Daddy both love potato chips so these was a really fun taste test for them! ??❤️??

My mummy says she’s all in for a chippy taste test!!! Now we need to find some! ??

I bet you could find chips easily and do your own test! ??

Perfect timing for me as my local grocer has Utz’s on sale this week.

Well I do Love taste test. But this one now makes me want some potato chips. LoL. Y’all are just having a Great Time out on your Adventures. Can’t wait for your next stop. Safe Travels.

Taste testing is so much fun! Do you think I can order those online? Thank you for sharing your latest adventure!❤️

yes you can order all these brands online

Your little adventures… informative and entertaining.

Thank you… we are soooo happy that you are enjoying our posts. ??

I love taste tests, too, little Millie!!! Thank you for sharing you wonderful vacation experiences with us!!! ?

You are very welcome. Thanks for following us this summer. ?❤️?

Meant to type “share your wonderful vacation experiences with us!”

Please ignore my last post, little Millie! I meant to type “sharing your wonderful vacation experiences with us”! ??

Hi Millie I grew up on Gibbeles chips and UTZ chips my favorite are UTZ barbec1ue and Gibbles .

it’s REALLY fun to see that you did the potato chip taste challenge! Now I’ll share with you the challenge that was done and how they ranked the chips… ( I didn’t want to sway your decision ahead of time LOL ) their #1 chip in Pennsylvania was GIBBLES…… #2 chip was UTZ………. #3 chip was MARTIN’S! LOL to each their own I suppose…..but it is fun! Here’s the link to their taste test…. they had some other brands but I didn’t collect ALL the brands from Pennsylvania but I got the top 3……. https://www.pennlive.com/life/2019/07/ranking-pennsylvanias-potato-chip-brands-from-hartleys-to-middleswarth-and-utz.html

WOW VERY INTERESTING!!!! Mummy had a toss up between Gibbles and Martins for the #2 and 3 spots… but gave Gibbles the #3 spot because it was just a little TOO SALTY for her taste. UTZ has a nice light flavor and was lighter on the salt so it got #1 for Mummy!

What a wonderful time you all are having! So glad you’re including your fans in your travels! Love hearing of your experiences!

This has been a really fun summer. ?❤️??

But why didn’t you girls get to taste test as well???

Mummy said the salt would make us too thirsty… requiring lots if water… requiring potty breaks… so she said NO CHIPS FOR US!

I love Utz! Now I can buy in Florida!

These were Mummy’s favorites!!!

Hi Millie
So mommy and daddy had a chip tasting.
I haven’t heard of the other chips. But I really like UTZ. I get them here all the. Time. I think mommy can get them at stores when you all get home.
Have a wonderful day..
Hugs and Kisses
Oliver and mommy ??

Mummy has never seen UTZ before but she will look for them now… or ORDER THEM!

That is such a cool idea! I love potato chips!

Awe, Millie, you and your sisters should have been able to participate in the taste test. I know you could have come up with the true winner. ??

Good Evening Everyone,
Actually I am having some chips right now. Waiting for tomorrows adventure. Have fun and be safe.

There is nothing better than a GOOD CHIP! ?

Yes taste tests are always so much fun! Loved all your feedback.

Mummy and Daddy love TASTE TESTS while on the road!!! I think it’s just an excuse for them to eat! ???

Taste tests are super fun! Thanks for sharing!

They are super fun… but funny thing is, they never do taste tests of stuff like carrots!!! Lol

MARTIN’S SOUNDS GOOD TO ME BECAUSE THEY ARE KETTLE COOKED. BUT I’M NOT SURE THATS ALL OF IT. I NEVER HAVE TASTED THEM. COULD VERY WELL BE ONE OF THE OTHERS. I BE THERE ALL TASTEY.
THANK YOU AGAIN. BE SAFE. LOVES FOR THE SWEET PETS…

The UTZ were Kettle cooked too, but it was a LIGHT tadting kettle cooked taste which Mummy really liked. They make a plain kind too.

Hey Millie sounds like y’all are having a wonderful time. I got behind reading what have seen. Very interesting. I’ve enjoyed .
Be safe love y’all. Boy I sure miss little videos of you and sissies.

Thanks for following along with us this summer. We have really enjoyed reading all of your comments. ??

My favorite of the 3 is Martin’s I like the kettle cooked and I like when the chips curl/fold over. Utz is #2 for me and Gibble’s #3 only because of the more “lard” flavor to the chip. Martin’s and Utz are lighter chips. I like Utz regular BBQ chips. BUT Gibble’s makes THE VERY BEST CHEESE PUFFY’S!!! mmmmm

They were ALL delicious and we thank you again for the samples so that we could do this fun taste test! ??

Mummy is going to order some of the SOUTHERN HEAT BBQ when we get home! Those were her favorite kind!