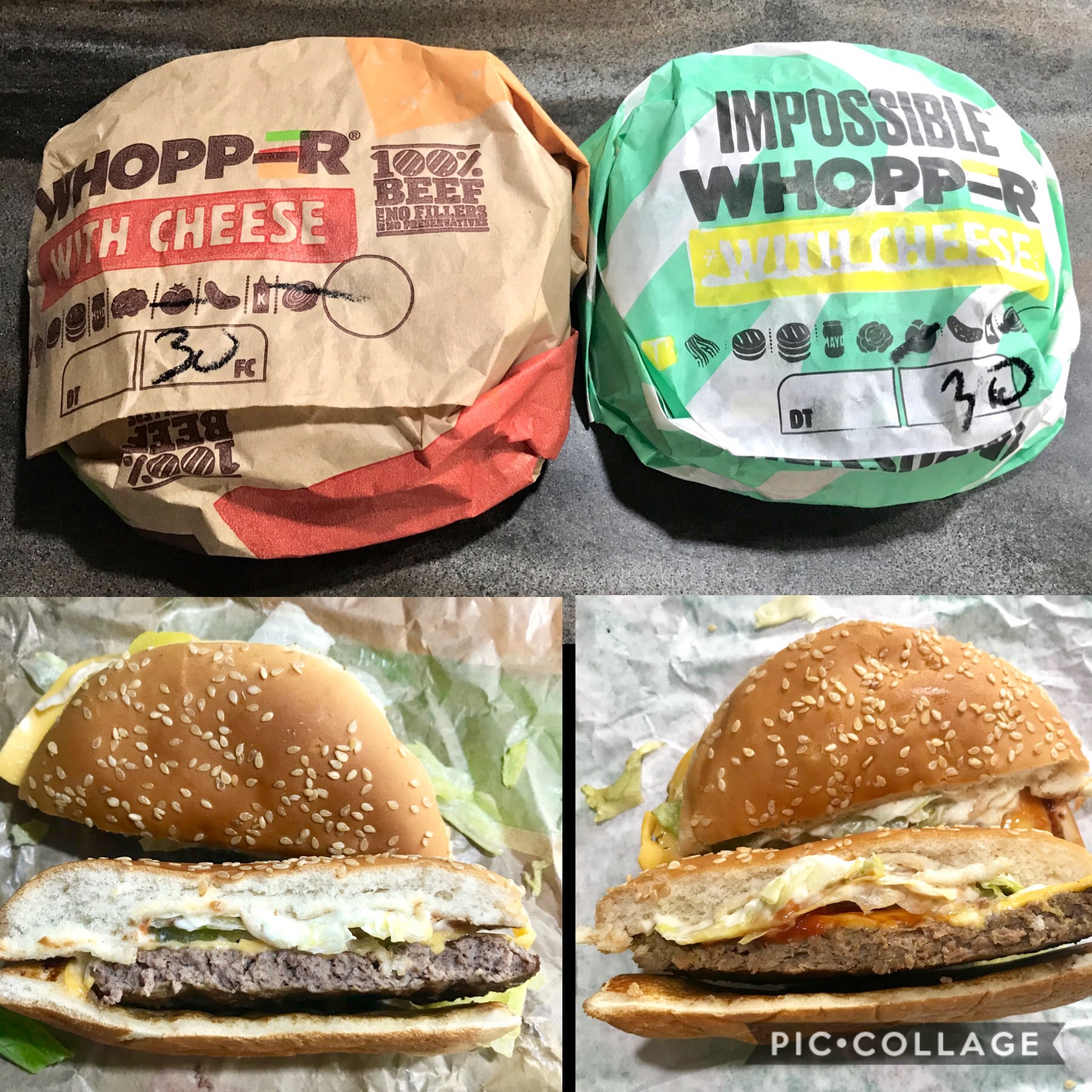 Mummy and Daddy are doing another “scientific research project.” This time they are taste testing the new plant-based burger that has hit the market at Burger King… the IMPOSSIBLE WHOPPER. Mummy and Daddy are both MEAT LOVERS. Please don’t send us any emails telling them to stop eating meat because it is bad, or unhealthy or mean or whatever because they are not going to stop eating meat… just read about their taste test. ?❤️? The burgers had the same toppings on them and Mummy cut them in half and handed each one to Daddy without him knowing which was which. He chose the correct ones… BUT, he said that if served the IMPOSSIBLE WHOPPER at a cookout he would be OK with eating it. Mummy felt the same way. The REAL WHOPPER does have a beefier taste and different texture. The IMPOSSIBLE WHOPPER has a bit of dense texture in your mouth and doesn’t taste EXACTLY like beef but if you are a vegetarian you would be thrilled to have one of these! On the downside, I believe the sodium content on the IMPOSSIBLE WHOPPER is about 4x that of a real burger in order to get that beefy flavor… so you might want to check the contents if you have special dietary requirements on that order. We four doggies DID GET A SAMPLE of the 2 burgers and feel that our parents were a bit harsh in their scores… BOTH BURGERS SCORED THRU THE ROOF and Burger King deserves an award in our opinion!!! We are available to advertise for the IMPOSSIBLE WHOPPER and will only charge them in BURGERS! With us as their “spokes-doggies” we imagine the stock will go THRU THE ROOF.   Seriously! ?❤️????

Give me the MEAT!!!!!! I’m so happy to ride along to your summer vacation, Millie, Mummy, Daddy and the rest of the gang!!!!! I loved meeting you in July; although it would have been better if it was cooler. If you get to Marlborough, MA again, please let me know. Fun and safe travels on your way home CREW!!!!!!
Brenda

We enjoyed meeting you too! But give that IMPOSSIBLE WHOPPER a try just to say you did it! You might be surprised at how good it really is… Mummy was pretty shocked.

Dear Millie and Mummy, I too am a meat eater, and I always will be. I have begun having ONE meatless dinner a week, just to try it out, but my dinners usually center around a meat dish (please do not judge, vegetarian and b=vegan friends). As a person with celiac disease, I have to eat a TOTALLY gluten free diet (NOT by choice, I guarantee!). Most of these plant based meat substitutes aren’t gluten free, so I can’t say if they are good or not. But if they are gluten free I will try it and give my opinion!… Read more »

Yeah I’m not a Whopper fan with or without meat… I do however like the double King cheeseburger. It will be interesting to know how the impossible burger works out….. I have to watch my salt due to high BP so that wouldn’t even be an option for me anyway.

Hi Millie: I am curious what the impossible burger is made of? Hey type of plan base so I plan on looking into it. I was a vegetarian for years until I developed Celiac Disease and had to cut out more foods from my already limited diet. I also have other food allergies like corn, peanut etc. Since returning to meat I feel much better actually. So I believe some people need to eat meat to stay health and of course you girls certainly need it too. xoxo

I don’t know… but this tasted sooooo much like meat… we were ALL SHOCKED! I want to know what is in it too!!! But Mummy and Daddy will always eat REAL MEAT but this IMPOSSIBLE BEEF could be a good choice for others.

Mummy said she still prefers the BEEF but we would take either one! ???

You girls are just like Lucy & Maggie. If I have something in my hand that even REMOTELY smells like beef, they come running for their serving!! LOL!
Thank you for sharing your wonderful journey with us! We have learned so much!

I’m a Meat eater too!.. but I will try the impossible just for curiosity 😉 Thanks for all the great info! Kissesss

Ohhhh you should do the side-by-side taste test like we did… to really compate them!!!! ?