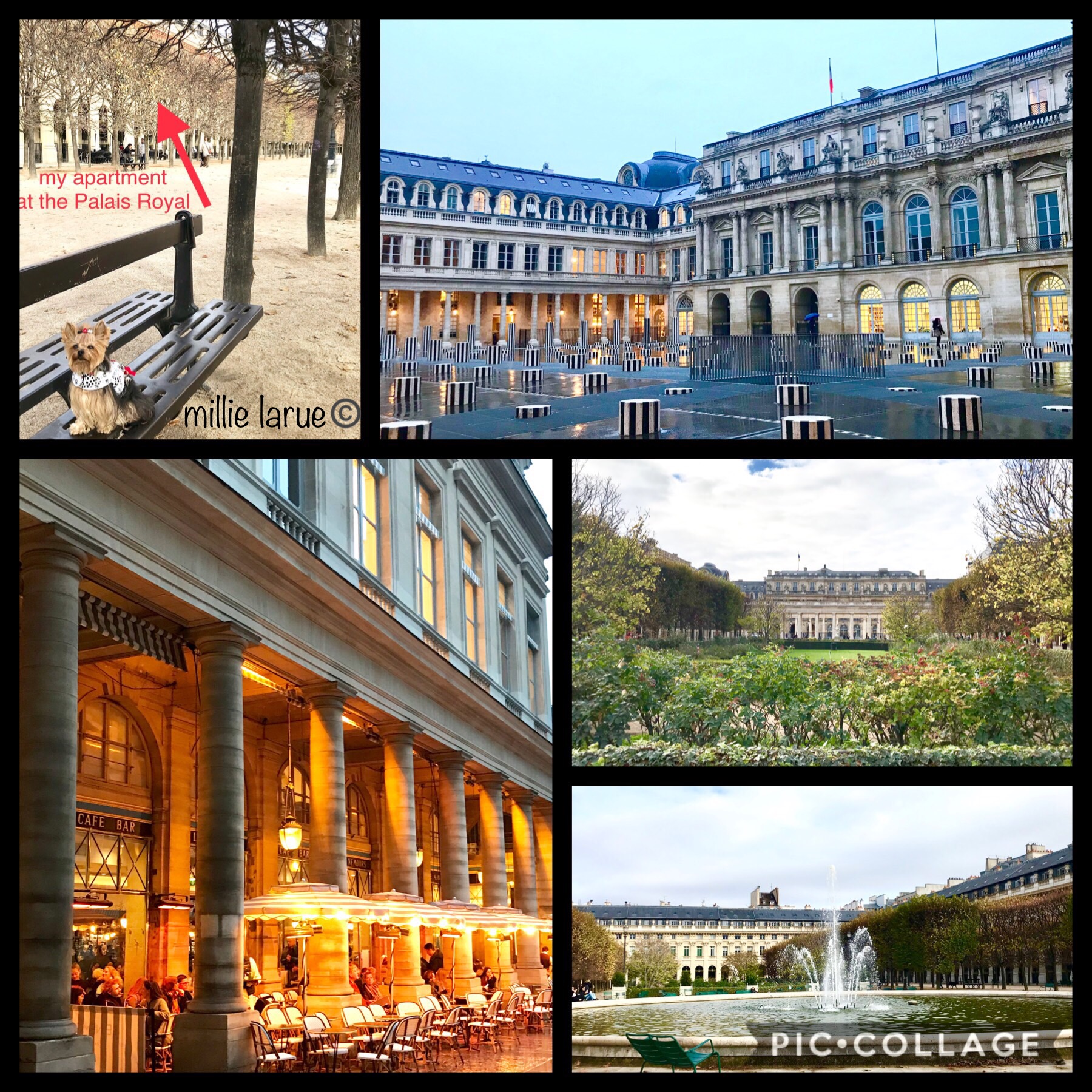 Staying at the Palace

On my final trip to Paris I find myself in the 1st arrondissement, staying in an apartment at the Palais Royal! It is a tiny little thing but perfect for my needs with just me and Mummy… it is the GROUNDS, the AREA and the HISTORY of the building itself that are quite spectacular, so let me tell you a little of what I have learned about my new digs.

The Palais Royal was once a ROYAL PALACE. It is a gigantic square building with an inner courtyard garden surrounded by columned walkways where you are now able to shop or dine in the stores on the ground level. The upper floors have been converted into luxury apartments, with a few smaller apartments on the ground floor. Doggies are allowed to stroll inside the inner courtyard and hang out around the gigantic fountain anytime they please!!! Mummy and I take walks out here several times a day and we can sit at any of the numerous cafés that border the garden… which are only steps away from our apartment.

Some of the royals that called this place “home” were King Louis XIII, the Queen Mother Anne of Austria with her two sons Louis XIV and Philippe, duc d’Anjou. It was also home to exiled Henrietta Maria and Henrietta Anne Stuart, the wife and daughter of deposed King Charles I of England. They had escaped from England during the English Civil War and were given shelter here by Henrietta Maria’s nephew… who just happened to be King Louis XIV!!! It just goes to show you… it really IS, WHO YOU KNOW THAT COUNTS!!! ??

Henrietta Anne later married the King’s younger brother, Philippe de France, duc d’Orléans… and the next year she gave birth in the palace to Marie Louise d’Orléans. The palace became the primary residence for the “House of Orléans” and would be known as the social center of the capital under this newly married couple. The crème de la crème were seen at the parties given by the family and all of French society came here to be seen!

Many years later, sections of the Palais Royal were turned into the shopping arcades that exist today. These arcades became the center of the Parisian social life and people came here to get away from the dirty, dangerous streets of Paris and window-shop while also socializing!

So many more royals lived in the palace that it is difficult to mention them all, but the history that surrounds the area is magnificent! Today, several government offices are housed in part of the Palais Royal and the art installation by Daniel Buren called “Les Colonnes de Buren” made from black and white striped concrete columns, sits in the large inner courtyard of the Palais since 1986.

We have LOTS of exploring to do in this area during our final trip. The Louvre is just across the street and the shopping street to rival any street in the world is only one block away… rue Saint-Honoré. Every designer in the world is on that street, and I will go there… snd see if they know MY DOGGIE DESIGNERS!!!

Have a great final trip.

Please share pictures of the interior of your apartment. I can only imagine how beautiful and French cozy. Always look forward to your posts. Thanks so much.

Sounds like a beautiful place to stay. I enjoyed the history lesson…how fabulous! Enjoy shopping on rue Saint Honore’ I think that’s where I bought some beautiful French Fabric years ago. They just might know your doggie designer’s sweet Millie….if not strut your stuff, show them the world of sweet Millie La Rue. They will fall in love with you.

Looking forward to your last Paris adventure as it unfolds. You and your Mummy always seem to find the best places to visit and wonderful items to remind you of the time spent in the City of Lights. You are the perfect ambassador!

Please post photos of the inside of your apartment. I always enjoy seeing all the beautiful places you have stayed in Paris and the shops here sound wonderful. Looking forward to your photos and descriptions. I want to visit all these places and they are on my bucket list now. Thanks for sharing with us. I am discovering so many exciting places in Paris through you Millie. A most beautiful tour guide you are Love those sidewalk cafes too

Thank you for sharing . I look forward to your posts!!!! Have fun!!!

Oh, your location is fabulous, Millie and Darsey! The arrondissement of the Louvre is beautiful, and you’ll enjoy everything about it, I’m sure. The shopping is wonderful, the cafes are tempting…what could be better? Thank you for sharing the history of the Palais Royale, by the way. You’re truly in a historic building! I can’t wait to hear more. When I was in Paris my favorite shopping street was the rue that led to the Garnier Opera House–a majestic place. We went there on my birthday and it looked like every shop was as beautiful as the opera house itself.… Read more »