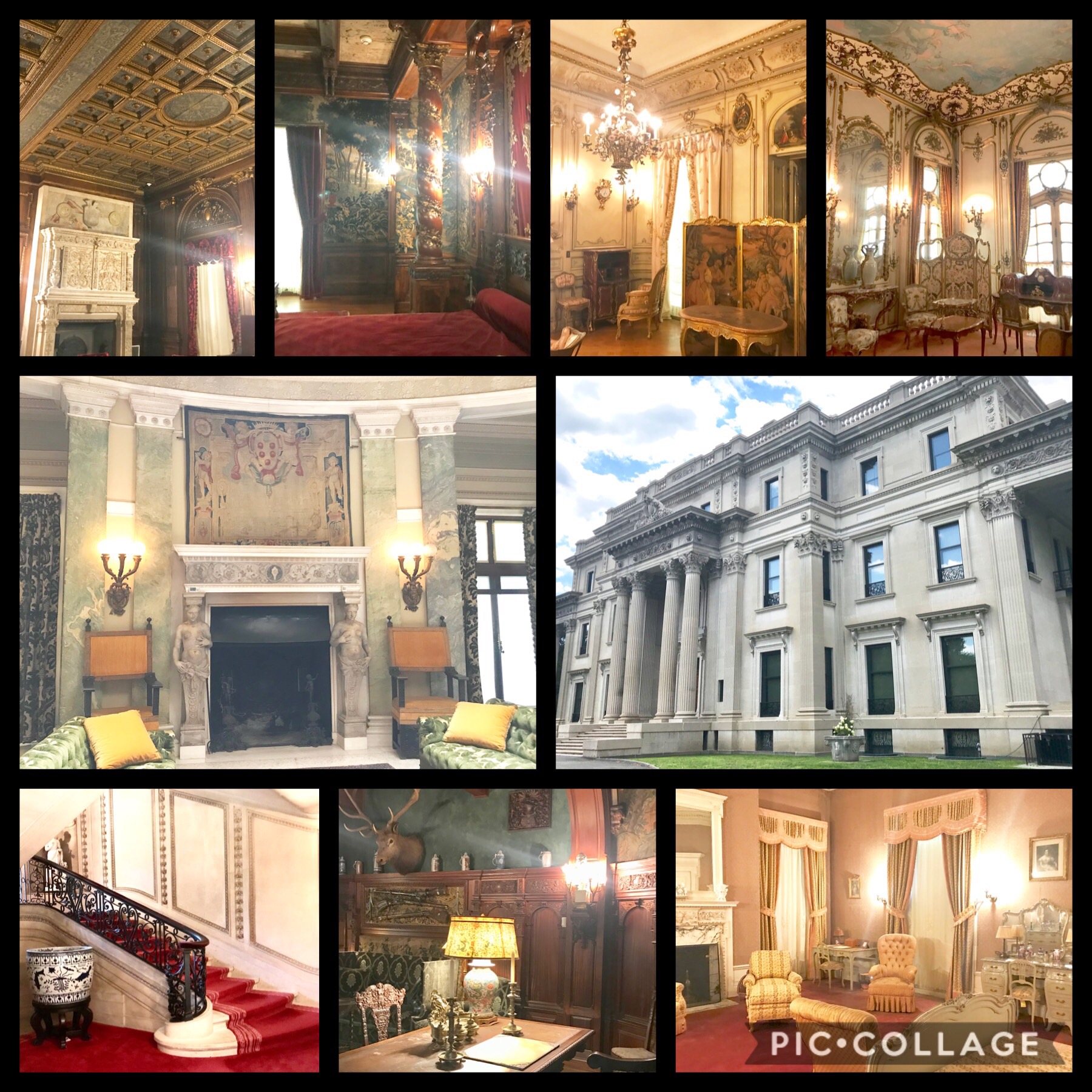 Mummy and Daddy set off again to tour another mansion here in Hyde Park, New York. This time it was the VANDERBILT MANSION that caught their eye, and after hearing about, we can see why! It wasn’t a doggie friendly place so we took a nap and waited for our parents to come back for us… we would take a little drive thru the mountains and check out a nearby town later!

Here’s what they told us about the place:

It was built in 1898 by Frederick and Louise Vanderbilt, and it took 3 years to build. Frederick inherited his money from his father,  Cornelius Vanderbilt, who made his money in the shipping industry. It is interesting to note here that Cornelius was just a poor immigrant kid… I mean really, NO MONEY! He had $100 that he invested in some kind of rowboat or something and started ferrying people across the Hudson River. His little business grew from there and he started putting the bigger boats out of business! Fast forward to the time that he dies… this one man dies leaving $105 million dollars in his estate… which was just UNHEARD OF IN THAT TIME, for ONE MAN to have that much money!!! That is about $250 BILLION dollars now, and would make him the richest man in the world x2!!! George Vanderbilt (the guy who built THE BILTMORE) is the grandson of Cornelius Vanderbilt and he inherited from his dad and grand-dad about $7 million dollars… and built that humongous house with his money! Almost all of the kids and grand-kids who inherited their money lost it over wasteful spending!

Soooo… back to the Vanderbilt mansion… this house was built in 1898 in the Beaux-Arts architecture during the late 19th-century. It was known as a country place and was furnished with original French and Italian furnishings, Flemish tapestries, and Oriental rugs. It was considered very modern for the time with plumbing, forced hot air central heating and electric lights, which were powered by a hydroelectric plant built on the estate. They had electric lights here before the surrounding area did… and at night, people would line up down at the road just to watch THE LIGHTS go on inside the mansion… it was such a sight to see!!! The 54-room mansion now sits on 211-acres but used to include 600 acres that are on a bluff overlooking the Hudson River. Mark Twain called this time in history, the “Gilded Age” because he said that the period was glittering on the surface, but corrupt underneath. In the popular views, it was a century of greed and guile; of Robber Barrons, unscrupulous spectators and corporate buccaneers, of shady business practices and vulgar displays.

As a couple, Frederick and Louise entertained here often, having lavish dinner parties and inviting many important guests to stay with them. Only the finest foods and wines were served and everything in the house was of the highest quality. Louise died while on a shopping trip in Paris and it would be another 12 years before Frederick would pass away in 1938, but he continued to come to this huge mansion, all alone, and enjoy the surroundings. They had no children, so when he died, the estate went to his niece. She tried to sell it for only $250,000 (the furnishings alone had cost well over $1,000,000) but it was shortly after the Depression and no one had any money. The yearly upkeep on the place was $1,000,000 so, with no buyers in sight, it was suggested that she donate the house to the National Park Service… which she did. Today, the house sits in pristine condition, almost exactly like it was left the day that Frederick Vanderbilt died.

From 1941-1943 President Roosevelt, who lived just down the road, would house his Secret Service in the basement and 3rd floor service areas of this house. Some of the President’s staff and friends sometimes stayed in the main bedrooms of the mansion, including those of Frederick and Louise Vanderbilt.

One of the later Vanderbilts, William Vanderbilt, is quoted as saying: “Inherited wealth is a big handicap to happiness. It is a certain death to ambition as cocaine is to morality.”

I really enjoyed hearing about your adventures. Airstream on!

NICE!!! THE VANDERBILT’S EVEN OWN THE MANSION IN RHODE ISLAND. IT’S CALLED “THE BREAKERS” . IT’S JUST AS BEAUTIFUL. YOU GIRLS ARE SOOOOO LUCKY. HAVE A GREAT TRIP!!!!

Oh yes… they went and saw that one too!!! It was HUGE! If you scroll down thru all of our previous posts you can read about their tour of that mansion too! ??

Wow Millie LaRue I’m truly learning a lot of History from your Mummy and Daddy. I Love the Photos that are put on Too they make the story come alive. Can’t wait for the next lesson. But please No tests. LoL Love y’all

Lololololol I know! Mummy and Daddy have learned a lot too! It makes it more fun knowing there won’t be a POP QUIZ tomorrow!!! ????

So true money can’t buy happiness or health! Thank you for the wonderful explanation ???

It was a very interesting tour and a beautiful home. The tour guide was great!

Wow Millie! I love hearing about the history of your trip. It makes me realize how much I don’t now. 🙁
I knew about the Vanderbuilts but didn’t realize they lost their fortunes. Thank you!

Yes!!! Almost every one of them lost the money they inherited!!! They just spent it all!!! It is AMAZING!!!

Thank you for all the history you are telling us. I love history and like hearing about all the sites and wonders that are in our country. Love you little Airstream girls. <3

The tours are great because they tell you little things that aren’t in any history books!!! ?

Wow! Interesting. It is so sad, though, that one man’s hard work has such a sad ending for the family!

I know!!!! And it is all gone!!! Some of the money is still going, like the Biltmore turned their home into a public attraction because they could no longer afford to keep it up… but even George ran out of money while building it and was unable to finish off many of the rooms!!!

That is a wonderful synopsis of a fascinating era and it’s wealth!! Great story!! ??????

Yes, it would be very interesting to really read up on the history of this entire family! ?

Yes, she is related to them… but she put her money to work and developed her own DESIGNER CLOTHING LINE!!!! She built her own empire!!!

Amazing house, little Millie! Thank you for sharing its history with us!!! ?

It was just a fabulous house…. it really looked like VERSAILLES inside. T There was a lot if gold trim and ornate furniture… and this was just a SUMMER PLACE!!! They had OTHER HOME besides this one!!!! ?

WOW! Very interesting! Was Gloria Vanderbilt related to this family ?? Enjoy seeing all your travel pics!

Yes… she was related to them… but she built her own empire thru her own CLOTHING DESIGNER LABEL.

It was an amazing house!

Yes! Now Mummy wants to read more on this family.

I am really enjoying all of your tours and history! This looks like a palace! Wow! ❤️❤️❤️

I am glad you are enjoying our posts. The tours have been very interesting. ?❤️?

WOW! Gorgeous! Thank you for sharing the history and beauty of your travels!

This house is absolutely beautiful!! Oh my! That was a lot of money for back then. Thank you for including that George was a grandson. The Biltmore House in North Carolina sure pales in comparison for sure! I mean Wow!!! This house almost looks like a county courthouse down here!! I am learning so much history from your trip!! Millie, I hope you and your sisters had a wonderful rest today so you will be ready for tomorrow’s adventures! I can’t wait!!!

Mummy is going to read up on this family when she gets home… and buy a rowboat to start ferrying people across our creek!! Lolololol

Vanderbilt Planetarium is in Centerport, Long Island. It was built but William Vanderbilt and was called Eagles Nest when he lived there. It is beautiful. Can you imagine one family having all that money? Must be nice!

It is sooooo much money!!! I don’t know if I would really want tgat much… it sounds nice at first but I think it might be a curse!

Loved the pictures and history of the family. thanks for sharing.

It was very interesting. ?

Thank you for sharing your adventures – I have learned so much. You girls are so lucky to be on this special trip.

I am glad you have enjoyed our posts. We are enjoying sharing our stops with all of you . ??

THE VANDERBILTS HAVE A INTERESTING FAMILY. I ENJOY READING THIS ALSO. THE MANSION IS SOMETHING. LOVE HOW THE STAIRS ARE.
THANK YOU SO MUCH FOR ALL YOUR WORK. YOUR SWEET LITTLE ONES ALSO. YOUR HUBBY TO.

You are most welcome. Mummy is going to read up more on this family when she gets back home. It is all very interesting indeed. ?

I thought a Vanderbilt died on the Titanic? So I googled it and found this.. Alfred G. Vanderbilt, George’s nephew (whom some newspaper reports at the time claimed was on board the Titanic), died on the Lusitania in 1915, on the same voyage that Marconi survived. So there you go! You inspire our learning! It sounds like a very tragic life for such wealthy people. This home is beautiful it would cost a lot to maintain it I’m sure.

Wow!!!! Thanks for telling us that… Mummy is going to do more reading about them later!

Hey Guys, Thought that you would like to know that there is another Vanderbilt home that sits in the” Great Smokey Mountains”. That one I think is quite a bit larger then this one. I don’t know if that one has anything to do with Gloria or not. My husband and I toured it when we were on a Bus trip and it is something to see as well. There is a gift shop that is connected with that one , just in case your Mommy wants to do a little SHOPPING , just saying. Enjoying the trip so far… Read more »

Oh, don’t worry… THEY Sw HEARST CASTLE!!!! But they will check into the one in the Smokey Mountains too! ?

More learning!!… thanks for sharing!! 🙂 Kissessss

Thanks for following along with us this summer! ??