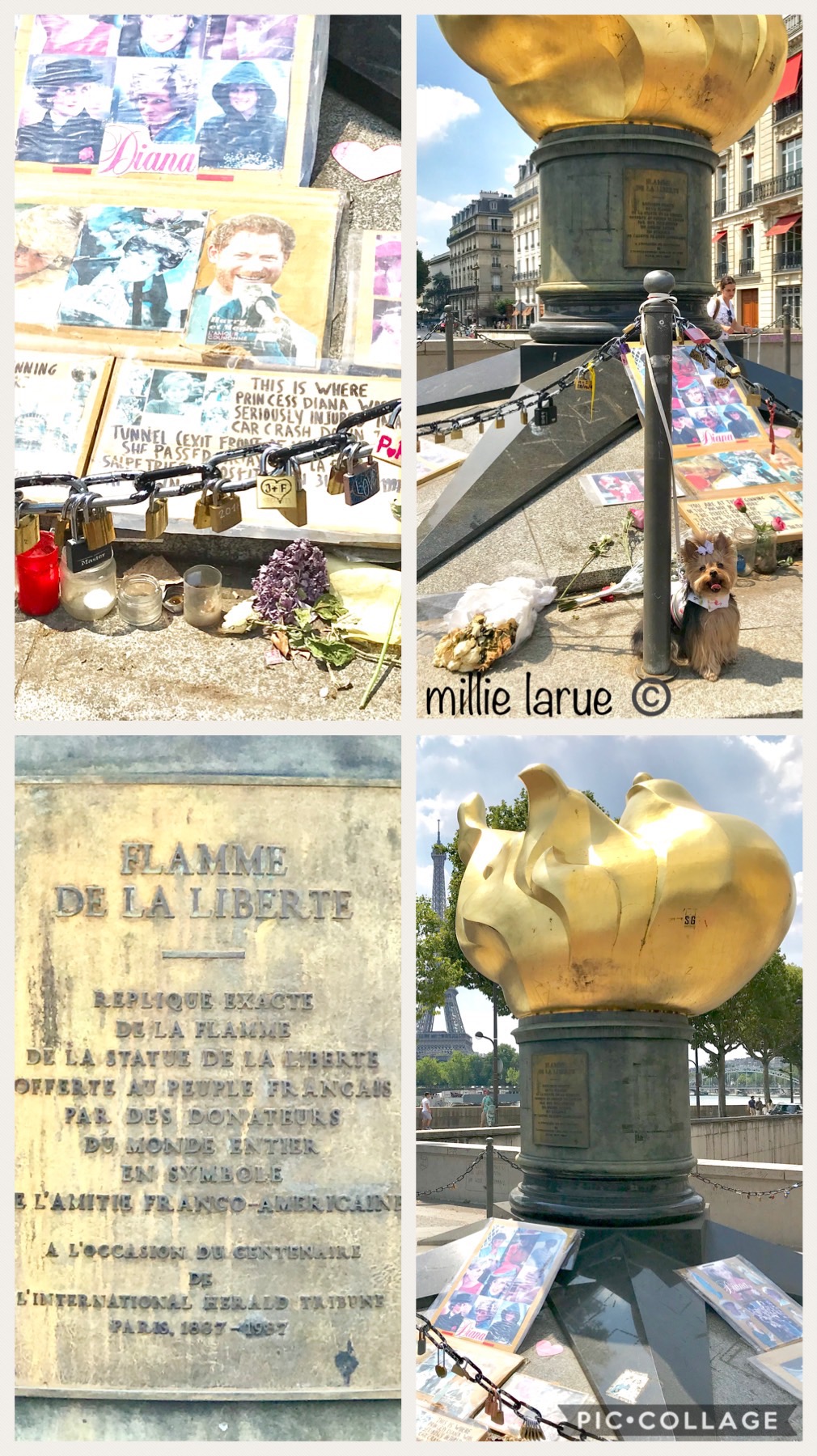 Paying Respects to a Princess in Paris ?

Our trip to Paris wouldn’t be complete without stopping to say a little prayer to Diana, Princess of Wales. Mummy followed everything that she did. She woke up early to watch her get married, celebrated the birth of her two boys, and woke up early to see her funeral. It wasn’t too crowded at the site but it is obvious that lots of people stop by this “unofficial monument” to pay their respects to a lovely person who was taken from us too soon. Many people attach locks on the chain that surrounds the “Flame of Liberty” monument, and put flowers at its base. The statue is situated over the north end of the Pont de l’Alma tunnel where the car accident occurred.  Princess Diana was killed on August 31, 1997.

But let me tell you a little about this “Flame of Liberty” because I like to give you a little history along with my travel posts. THIS WAS NOT PUT HERE TO HONOR PRINCESS DIANA!!!  The “Flame of Liberty” was given to France by the USA in 1989 in thanks for the restoration work they did on our own Statue of Liberty three years earlier. It is 3.5 metres tall and is a full-sized replica of Lady Liberty’s torch. The cost of the monument is said to have been around $400,000 to fabricate.  It was given as a gift of friendship, just as the Statue of Liberty was given to us by the French as a token of THEIR friendship to us!  The plaque reads:

”The Flame of Liberty.”

An exact replica of the Statue of Liberty’s flame offered to the people of France by donors throughout the world as a symbol of the Franco-American friendship.

On the occasion of the centennial of the International Herald Tribune.

If you are in Paris and want to see the monument, you can take the #9 metro to the Alma-Marceau exit and it is right there near the Pont d’Alma over the Seine River.

Thanks for sharing this with us, so sad she was taken so soon ??

I’m learning so much!

Thank you for sharing I’m like your Mummy I loved everything about Diana. I watched all the broadcast we could about her good or bad. I was so sad when she died because she had such a beautiful heart inside and out. She cared so much for people and it is wonderful to see Harry doing the same as she. Thank you for telling us about this monument.

My English heritage I have shared many of the Royal family experiences. i will never forget the night Princess Diana died. It was a very hot night in Georgia and I was online so heard the news right away. I cried alot. Thank you Miss Millie for paying your respects.

Mummy was actually asleep at the time and one of my brothers (who was just a young boy at the time) heard the announcement on TV and ran into her riom and woke her up and told her. She didn’t believe him and said that was the meanest thing he could say! He said he PROMISED IT WAS TRUE… IT WAS ON EVERY TV CHANNEL and she ran to his room and starting crying and the first thing she said was, “Oh her poor children!” ??????? To this day she can’t stand Prince Charles and don’t even get her started… Read more »

thanks for sharing I did not know this! hope you are keeping cool!

Very interesting Millie. I too adored Princess Diana and am so glad you stopped to remember her. You are the sweetest little one.

What a special monument. I loved Diana and got up early…. the same as your mummy. Diana would be so proud of her sons and their families. How she would love the grands!! Enjoy your trip and thank you for sharing.!!

Princess Diana sure was the people’s Princess. She was loved by many, including me. Thank you for sharing

Very moving to see. I too woke up early to see all those events. She was the Queen of Hearts and always will be.

This was so sad. I can’t listen to Sir Elton John’s Candle in the Wind without getting teary.

Such a beautiful and wonderful lady. She would be so proud of her children and grandchildren. Continue to enjoy your beautiful Paris vacation. We miss you! Hugs!