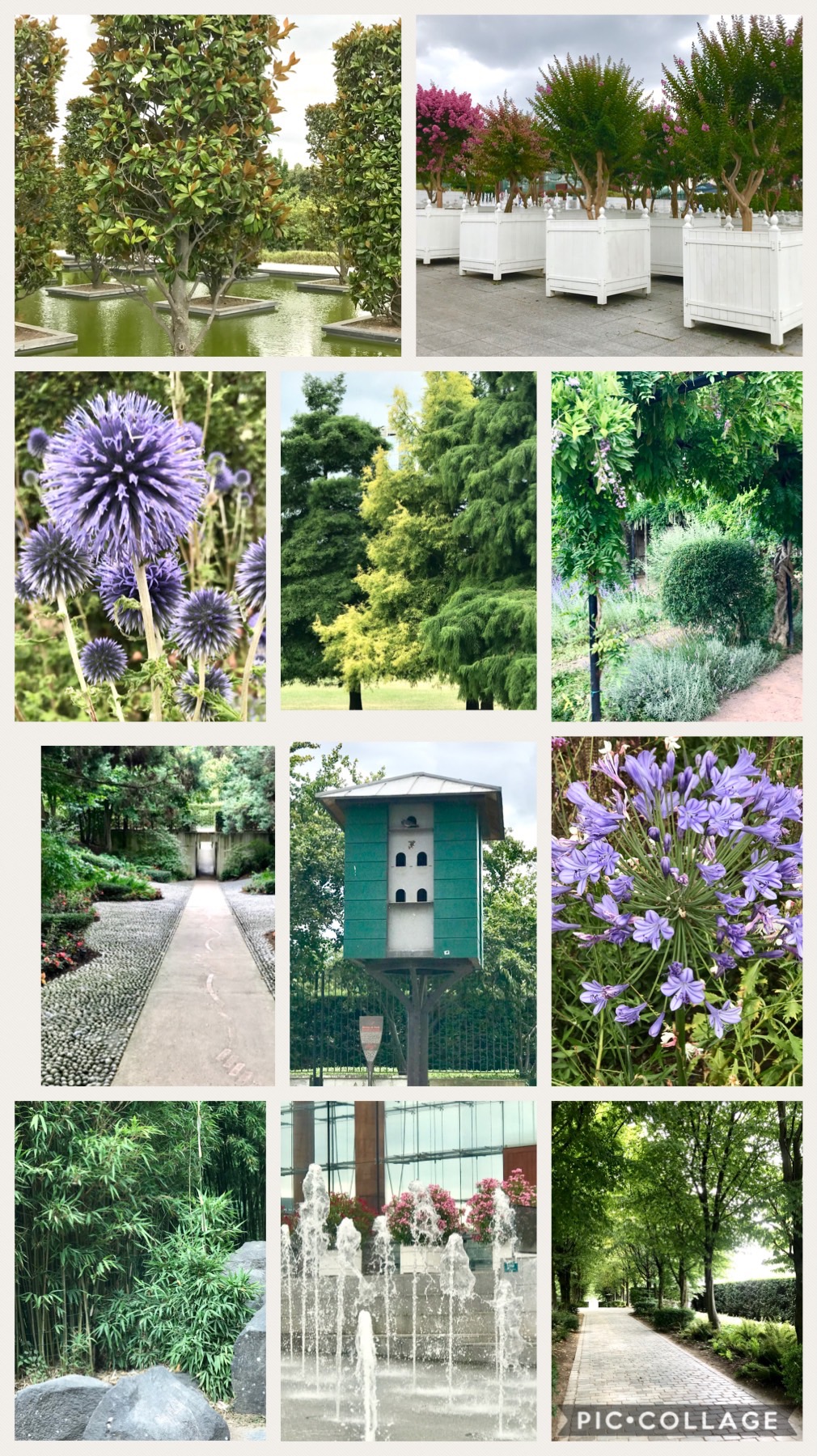 I told you in a previous post that Mummy and I visited the Parc André Citroën the other day. It was a journey getting there on a complicated (for us) metro ride, and a lengthy walk to the entrance… but we made it. We were greeted by a “No dogs on a leash” sign but since I was in my carrying bag Mummy chose to ignore it and try to get me in… no one said anything… I never put a paw on the ground or made a single growl to disturb the serenity within the park… and I left it exactly as I found it, BEAUTIFUL!!! I have included a few pictures in a collage for you, but they don’t do it justice. You really need to come here for yourself. This isn’t on the top 20 things to do in Paris so it’s unfortunately overlooked by many people. It is a 35-acre park located on the left-bank of the Seine River in the 15th arrondissement. It was the former site of the Citroën automobile manufacturing plant, where it operated until 1970. In the early 1990’s, the park began being designed. The park has many separate areas around a central, rectangular lawn. At the far end is a huge water feature of dancing jets of water spouts!!! Along the sides of the central lawn are the separate areas which are each landscaped in a different and unique manner. You will find people reading, having a picnic, or even sleeping in a grassy area on a quilted blanket!  There is also a set of six serial gardens in the park that are each associated with a metal, a planet, a day of the week, a state of the water and a sense. It was getting late and we didn’t have time to see the serial gardens but they are each  in a different color and must be beautiful: blue, green, orange, red, silver and golden. There is even a hot air balloon that will take visitors up for a 10-minute tethered lift in optimal weather… we didn’t do that but we saw the big balloon in the middle of a huge field. It was an overcast day and looking like rain so maybe they weren’t taking people up that day. I’m not sure little dogs would have been allowed anyway and Mummy wouldn’t have taken me. But the park is just fantastic and something that you need to add to your list of sites to see in Paris!

So glad you managed to get in to the park tucked away in your little carry bag. It looks lovely. ❤❤❤❤

What a lovely way to spend some time. Thanks for sharing Millie and mommy.☺

So Glad that your Mummy knows that where there is a Will there is almost always a way. LoL Your Little bag comes in plenty Handy. Plus you being the Fantastic Furbaby that you are truly helps your Mummy our Millie LaRue. Especially when it comes to getting you into special places. ? ❤️?❤️

What a lovely place to spend an afternoon Millie. And best of all??? No one mentioned ANYTHING about cute little doggies being carried through the park in a nice tote bag, right?

Millie you such a good girl by being quite aa a little church mouse. Girls are better at listening then boys. Trust me about the boy thing. Yankee would have been fussing to get out of the carrier or shooting his big mouth off! He just doesn’t listen! LOL

Sorry I forget to day the park photos are beautiful!! Thank you for sharing!!

I love beautiful gardens, it’s a shame you didn’t get to walk thru Hershey Gardens when you were here ( little dogs aren’t allowed in there either 🙁 ) but it is beautiful and they have a butterfly exhibit where you walk in and the butterflies fly around you and at times sit on you. I love the butterflies! Hoping you travel this way again and get to spend a little more time here.