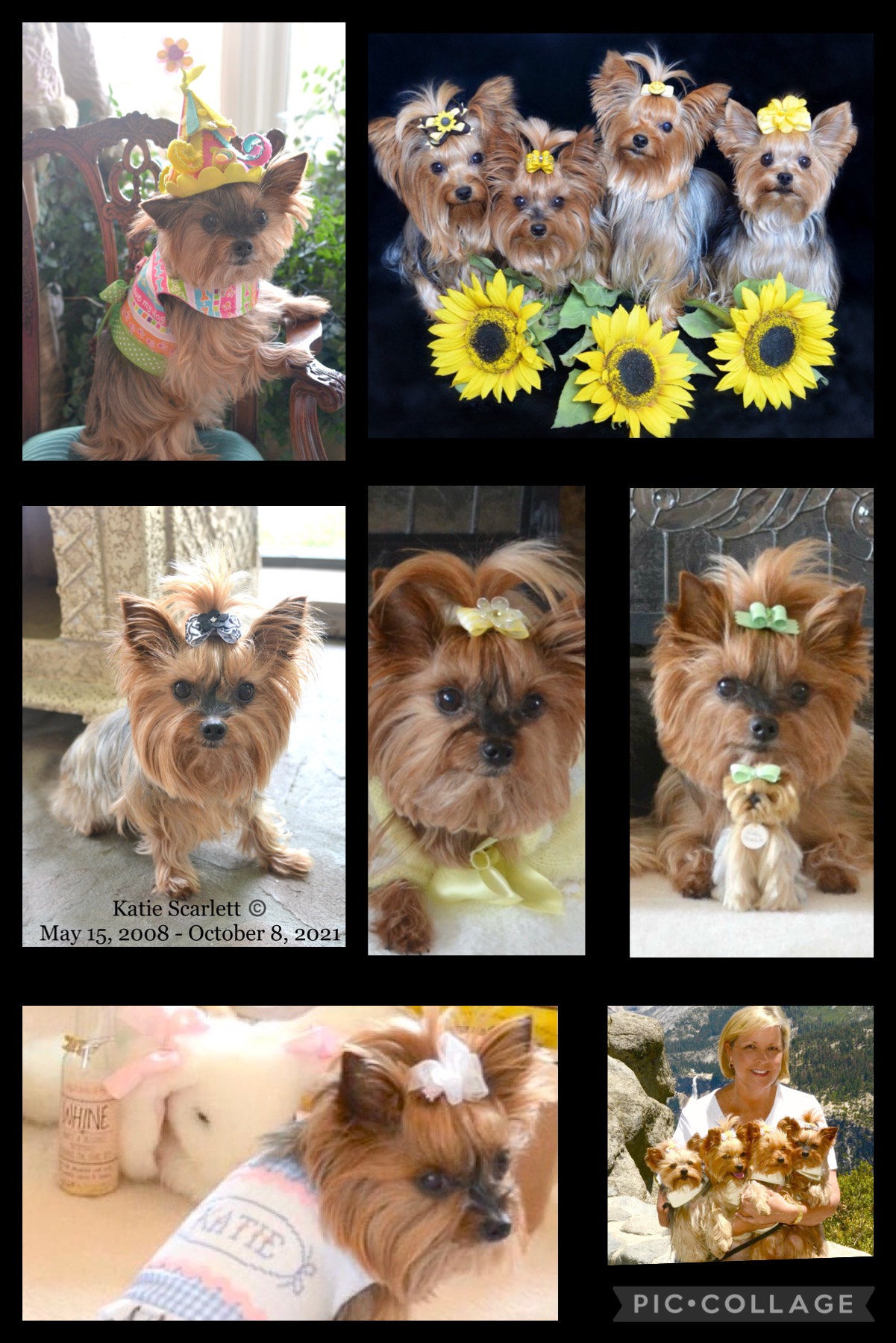 It has taken me several days to work up the strength to make this post, but our little Katie passed away last week. It was sudden and we are still in shock. She was not even sick… that we were aware of. Only last month we took her to the Internist to have a very thorough check-up done. It included a full blood panel and ultrasound. The bloodwork was basically fine and the ultrasound indicated a little pancreatitis. For the past month she has been playing and eating normally. Last Thursday she began to act a bit lethargic and we took her to the vet. Blood work was drawn and it was INCREDIBLE what had happened in only a month! She needed an immediate blood transfusion in order to live! Her values were barely compatible with life! They indicated a severe blood loss although there WAS NO BLEEDING ANYWHERE. They did a quick xray and saw nothing! Somehow her body was eating up her blood cells. We rushed her to the Emergency vet. Dog Donor blood had to be used because they didn’t have her type on hand. Her labs also indicated liver damage had happened in the last month… but HOW??? We needed to transfer her care over to her Internist, but FIRST she had to get the blood. It would take 3 hours to complete. We were told to go home and come back first thing in the morning when the Internist’s office opened to pick her up and take her over there. I was on my way there… 1 minute from there… and she had a heart attack. They performed CPR and she didn’t make it. Katie was just gone. We don’t know what happened. Maybe a blood clot. We don’t know what was even wrong with her because the Internist never had a chance to examine her. One month ago she was fine and now she is just gone. I am still in shock and just can’t stop crying. I will never have any answers as to what happened. My little Katie is gone.

We will miss little Katie  sending prayers to you 🙁

Oh, my heart breaks for all of you. I do not have the words to express how sorry I am for your loss. Know all of you are in my thoughts and prayers. Angel hugs and love to all of you! Thanks for letting us know as I know it is not easy to have to write the sad news. God bless each of you!!!

“I’m not dead
I just changed rooms
I live in you and walk through your dreams.”

Dear Darsey, Millie and family,
I am so very sorry for your loss of your sweet little Katie!
I know how you feel and that you can’t understand WHY. Lost my little Trixie last year and her twin brother Tyke in June this year.
Sending you love, kisses and hugs from Germany.
Anna with my yorkies Nobless and Jessie

Oh, Darcy and family… my heart breaks for you… this is shocking news. Our little babies are family and a big part of our lives. Katie was so fortunate to have lived a fun, adventurous good life with you and her sisters. You brought her so much joy, as she did for you. Keeping everyone in my thoughts and prayers.

I did not know Katie , but I followed you for a good number of years and I’m crying too . Love to you all . My heart is broken for you .

SO SORRY for your Loss! WE will all miss Katie! 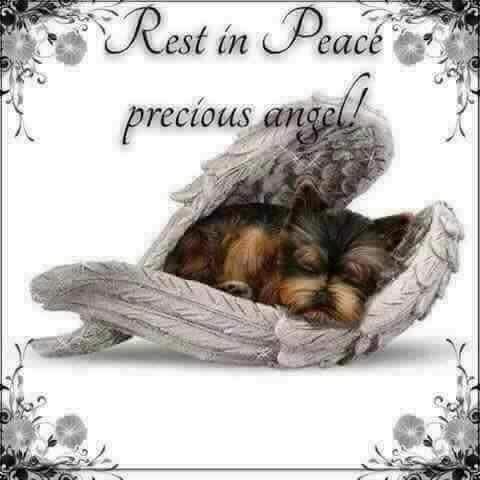 I am so sorry, Katie will be missed by all

OMG! 🙏 Little Katie was the sweetest little soul. We are so very sorry, Mark and Darcy! Your family is in our thoughts and prayers!

So so sorry . Prayers for you . Hope all others are well. It’s so hard .

I met you briefly once at a Yorkie911 event and lived following the tails of Millie, Tulip,Addie & Kate I am so sorry to hear of the loss of Katie I know the pain too well My deepest condolences to you all

I am so sorry to hear of your loss. The pain and grief is so real. RIP Katie. 😢

I’m so sorry 😞 Katie was so special, we all loved her so much.

Thinking of you everyday. You know I loved that little girl.

Omgosh! I’m sorry very sorry to hear this about Katie passing. I got the pleasure to actually meet her along with the rest of the Mitchell family in 2016 at Hershey Park. Sending thoughts, prayers and hugs for everyone.🙏 🐾🐾💋

So sorry for your loss.

I am so sorry to hear about your loss of Katie. I understand what you are going through. We lost our dog Freckles five years ago on October 8, 2016. It was a sudden passing as well. He went into shock from a tumor in his spleen that had ruptured and was bleeding into his stomach. The emergency vet hospital was going to do surgery to save him but he went into cardiac arrest and didn’t make it. My husband and I were devastated. It was so sudden and unexpected. He was only ten.

So very sorry for your loss. I will cherish the visit I had with all of you. She was so loved and will be missed

I’m so sorry for your loss

Oh I am heartbroken with you all. My deepest condolences. It’s so hard and to lose her so fast. Although I’m glad she didn’t suffer. I’m sure her sisters are bereft. I’m sending my love and hugs to Mummy, Daddy, and her sissies.

I didn’t want to read this when I saw Katie’s name as the heading. I am so sorry for your loss. You, your family & pups are in my prayers🙏🏻

So very very sorry for your loss 💔 I know that pain. It is so very hard to cope. I pray for peace and comfort from the good Lord above 🙌💙 Much love to you all💙

I am so sorry for your great loss at this time. Katie was so loved and she had a wonderful life with you. She will be forever missed and loved.

I am so sorry for your broken heart 💔 That is just shocking. Sending prayers and hugs to you. 💕🐶

My heart breaks for you.💔

So so very sorry. I know you’re devastated.

Omg, I’m so very sorry. She was so beautiful. May she Rip. ❤️

There are absolutely no words that make this any easier for all of you. It’s been four years and I miss Ruby every single day. Please know we are sending all of you hugs, belly rubs and our love from Delaware So so sorry for your loss.

I’m devastated to learn of the loss of your precious Katie. I know how heart wrenching it is. Many prayers to you all I’m so very very sorry.

Oh so sorry to hear this. Sending our love to you all 🥲❤️

Oh my gosh I am so very sorry for your loss of sweet Katie! My thoughts and prayers are with all of you! ❤️🙏

I am sincerely sorry. I know how we love our furbabies so much. I have lost three over the years and still cry when thinking about each one of them. They hold a special place in our hearts and take some of our heart with them when they leave. Sending prayers and hugs.

I am so sorry! They can’t speak and tell us what’s wrong! Praying for you all! RIP sweet Katie!💔🙏🏼

Oh, no! I am so very sorry for the loss of sweet Katie. My heart breaks for you.

So sorry for your loss
Sending hugs and love

I am so very sorry for your loss. I have loved your posts for years, and just love your little gang. Prayers for you and your family.

So sorry for your loss! Heartfelt prayers for comfort! We will all miss this precious baby!

So sorry for your loss. I feel great sorry for you and yours. I just lost my oldest son on September the 7th and am still recoiling from that loss. You and yours are in my prayers. So very sorry.

That is heartbreaking. I am so sorry for your loss.🙏🏻🌈😢

Oh! I am so sorry for your loss. It is never easy when we lose a member of our fur family. Just know she and Elvis are running and playing without pain. Prayers and hugs for you and the rest of your family (human and fur babies)

I’m sooo sorry. Writing this with tears. Made me cry. Prayers for you all

I am heartbroken for the loss of Katie Scarlett, and my deepest sympathy to all of you. It is always hardest when illness comes out of nowhere, and before we know it, our precious loved ones are gone. I am so very sorry. Praying.

I’m so sorry. Katie was a sweet little dog. She was a part of your family and you will always miss her but little by little it will get better.

Always so heartbreaking to lose them, even worse when it happens overnight and is unexplainable. I am so very sorry for your loss, the other girls must be in shock as well. Hugs to all of you.

Oh I am so sorry to hear about little Katie. May her sweet little soul rest in peace and run free of pain on the other side of the rainbow. Hugs and prayer to all of you. 🌈😢🐾😢♥️

We are so sorry to hear this. I was just looking at pictures the other day when we met up with you when you came through the Buffalo area. Such a sweet little thing. Sending our love and prayers to you and yours. 🙏❤️🐾

My heart is breaking sending hugs she was such a beauty

Our condolences to you all on the sudden passing of your beautiful girl.