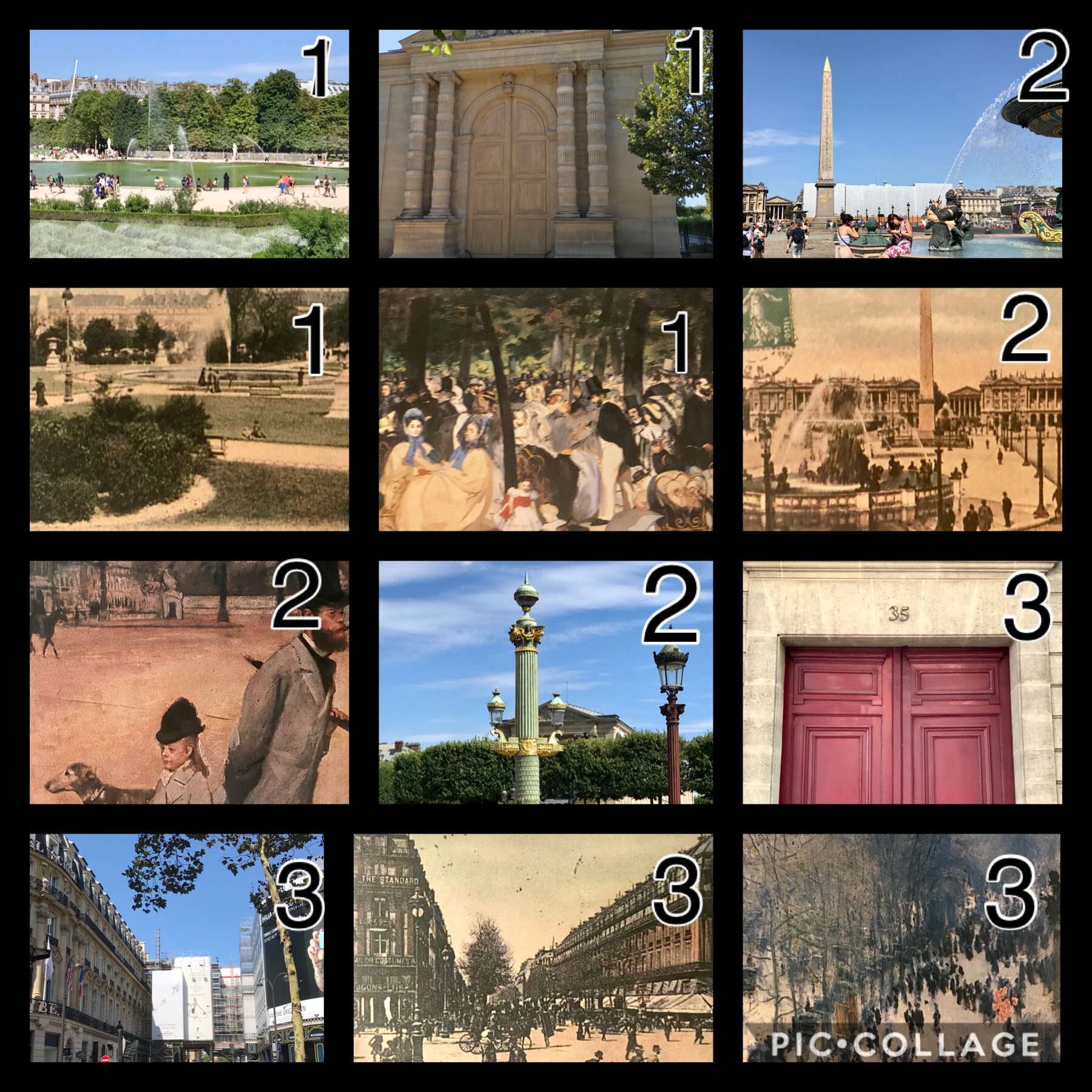 MAP TWO: A Walking Tour of the Impressionists of Paris

If you read my last post where Mummy and I have been following along in a book that highlights a walking tour you can take in Paris, you will recall that we are retracing the footsteps of the FRENCH IMPRESSIONIST ARTISTS… Manet, Degas, Monet, Renoir, Bazille and Caillebotte. Many of their canvases are hanging in museums around the world NOW, but during their time… they were often hard-pressed to GIVE THEIR WORK AWAY!!!   The book is broken down into 4 maps and we can only do ONE map a day because it is a lot of walking for us. My best advice when using this book is to make sure when exiting the metro, you have the book turned in the proper direction and you, yourself are facing the proper direction… otherwise, like us, you will find yourself putting in a few thousand extra steps in the WRONG DIRECTION… which isn’t necessarily a bad thing, because you will still see wonderful sights… they just won’t be the ones in the BOOK! SO, ORIENT YOURSELF!!! Map two was a hard map to follow because the sites were soooooo spread out!!! Not all of the little side streets were labeled in the book and we got lost NUMEROUS TIMES, but as has been the case in every situation here in Paris, whenever we asked a frenchman for help, they JUMPED to the task and were there to assist us! One shop owner actually LEFT HIS STORE UNATTENDED and ran us around the corner to point us to the tiny hidden street where we needed to go. We would have NEVER FOUND IT! Merci Monsieur! So… with no further adieu, here is what we learned on MAP TWO / The Grands Boulevards:

The snapshots shown were taken by Mummy… the photographs shown were taken from the book we are following titled, “The Impressionists’ Paris… Walking Tours of the Painters’ Studios, Homes and the Sites They Painted” by Ellen Williams.

#1: Photograph top (Mummy) and bottom (an old picture) These show pictures of “now and then” from the “Jardin des Tuileries.” These gardens are located in the 1st arrondissement of Paris. They were created by Catherine de Medici in 1564 and opened to the public in 1667. When it was built, it was the largest and most beautiful garden in all of Paris. In the 19th and 20th century it became a place where Parisians would celebrate, stroll the grounds and just relax. In the next photograph taken by Mummy, you can see the “Orangerie” which is now an art museum. The picture below the Orangerie is a canvas painted by Édouard Manet titled, “Music in the Tuileries” c.1862. Manet would go to the Jardin des Tuileries almost every day and sketch. In this picture he painted his own circle of well-to-do friends… artists, writers and musicians… all together at one of the concerts given weekly in the garden. He himself is pictured in the far left-hand  corner of the picture. In the 1870’s, Monet and Renoir would both paint canvases of this area from an apartment overlooking the garden.

#2: The top photograph taken by Mummy is at the same location as the next picture (an old postcard) of the exact same location at the “Place de la Concorde.” The next painting is by Edgar Degas c. 1875 titled, “Place de la Concorde” and in the background you can possibly make out a few of the elaborate street lamps that line the surrounding area. Degas lived on the corner of this street well into his adult years. This painting had been in a private collection in Germany and was thought to have been destroyed during WWII, but it was recently discovered with works that had been secretly removed to the Soviet Union.

The Place de la Concorde was renamed the “Place de la Révolution” in 1792 just before the famous guillotine was built here, just outside the gates to the jardin des tuileries, claiming about 1,300 people… including Marie Antoinette. It was changed back to CONCORDE in 1795.

#3: No. 35 boulevard des Capucines is the site of the very FIRST IMPRESSIONIST EXHIBITION, and where Monet would paint his canvas titled, “Boulevard des Capucines” c. 1873-1874. The picture of the postcard shows how the street looked back then. These Impressionist artists had suffered years of rejection from the art world, and a group of 30 artists, led by Monet and Degas, organized their own group where they would show their work independently from the very controlling state-sponsored system.

Whew! It was a long day and a lot of ground to cover but WOW, the HISTORY that has happened here. We hope that you are enjoying reading a bit about the places that we have seen. Let us know if there is something that you would like for us to check out!

Just love this history Millie and mommy. How exciting to see where they all painted . Just love the Impressionists.?

I love walking in your paw steps Millie and learning very interesting , new and history when you share your journeys. ?

Love the way I’m learning about Paris from your Smart Mom!! 😉 Kissessss

Personally, Millie, I love the wine, the food, the shopping, and the flea market treasure hunting. I would be all over that!! So look forward to your posts and postcards.

Wow Mummy and Millie LaRue you two are sure doing a lot of exploring. You must be Exhausted. Love all the History Lessons and the Paintings are Amazing. Thank you for Sharing.

It sounds like they are so so helpful! What an amazing journey!