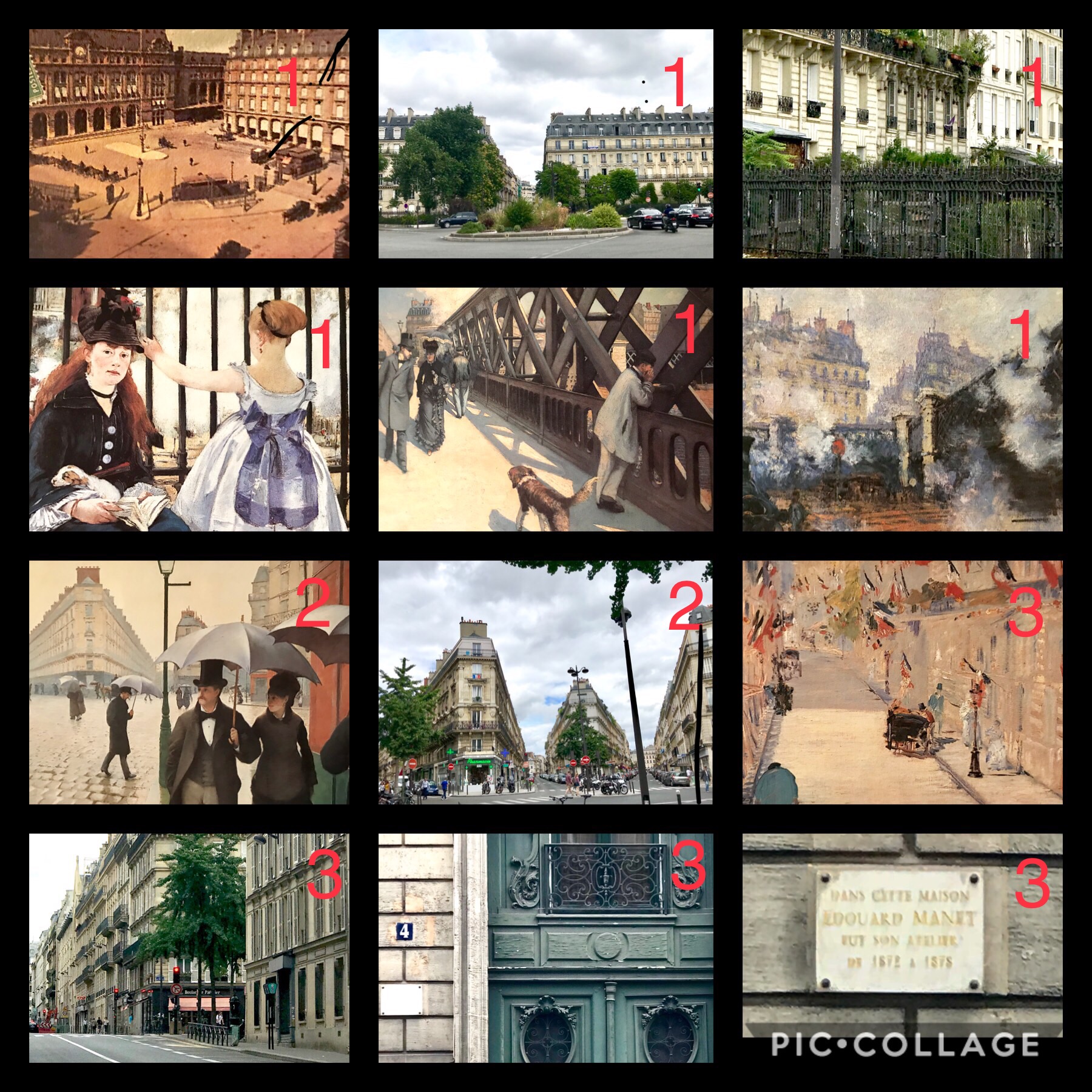 MAP THREE: A Walking Tour of the Impressionists of Paris

WHOA MAN! We have two more walking tour maps left in our book, “The Impressionists’ Paris: Walking Tours of the Painters’ Studios, Homes, and the Sites They Painted” by Ellen Williams. We are really learning a lot about the city from the perspective of the artists from long ago and Mummy said that it gives her the CHILLS to be walking past their homes and studios and think that long ago they walked down these very same streets and saw the SAME THINGS that we are seeing now! The pictures they painted that sell for millions and millions TODAY, were given away back then for room and board or even a few DRINKS at a local bar… no one wanted their work back then… they weren’t even appreciated. So many works were thrown away!!! Ohhhhhh the agony of it all!!! But… here we were today, starting at “The Quartier de l’Europe” so let me begin today’s art history lesson:

#1: The Place de l’Europe is the site of works by Manet, Caillebotte and Monet. This area has a much more residential feel to it than the previous walking tours. Although the HUGE GARE Saint-Lazare (railroad station) runs through this area giving it a bit of an Industrial feel, you won’t find many tourist attractions in this area, but will marvel at the architecture and soak up yet another part of the Parisian lifestyle. Not everything in Paris is like the Champs-Élysées, and this is a good example of a working neighborhood. The next picture is a photograph taken from our book and shows a canvas done by Manet c. 1873 titled, “Gare Saint-Lazare” showing a woman and child sitting at an iron fence watching the trains. The woman in the picture was one of his models, who posed for several nude portaits for him (two of which now hang in the Museum d’Orsay) and this would be the last canvas that she sat for with Manet. The last picture is also a photograph from our book and is a canvas painted by Caillebotte c. 1876 titled, “The Pont de l’Europe.” The man walking in the picture is thought to be a self-portrait of the 28-year-old artist.  Caillebotte was a wealthy artist-resident, and a friend… as well as a patron, of many of the Impressionists, and he often supported them financially and even bought many of their paintings! It has only been recently that his own works of art have been reappraised and confirmed as being art-worthy in their own right!!! The last picture from our book is a painting done by Monet c. 1877 titled, “The Pont de l’Europe.” You can see how very different the two styles were of Caillebotte and Monet. Caillebotte had a very smooth, clean and precise brush stroke where Monet had a much more loose and blurry style. Monet would actually paint 12 pictures here at this train station over several months. Three of these paintings once belonged to Caillebotte who was subsidizing the impoverished Monet with a ground floor studio nearby. Later, he would pay the rent on a larger apartment where Monet’s son, Michel was born, and again at another smaller studio nearby.

#2: Place de Dublin is the site of Caillebotte’s canvas titled, “Paris Street; Rainy Day” c. 1877. In Mummy’s photograph and the photograph of the artist’s canvas taken from our book, you are able to see how the street has hardly changed in all of these years!!! In fact, in the painting, as today, there is a pharmacy occupying the triangular-shaped shop, and a reproduction of this painting hangs behind the counter in the pharmacy!!! As mentioned in the book, “When Caillebotte’s collection was bequeathed to the state following his death in 1894, the conservative staff at the Académie des Beaux-Arts threatened to resign. After years of haggling, the works were finally installed, though denounced in the Senate as an insult to France.” WOW!!! These artists had a really ROUGH TIME BACK THEN!!!

So…. that was our experience for today. There were additional stops made at the apartments and studios were these artists had lived in this area, along with general locations where they had dined at cafés of the day. We took time out to sit at a café at the Place de Dublin so that Mummy could read her book with a cool glass of limonade and I could rest in the shade after Mummy served me de l’eau. All in all, it was a very fine day indeed.

These walking tour lessons are so interesting. Thank you Miss Millie and mommy☺

Ugh….thrown away! So many people are only appreciated after they die. I still have a chance then 🙂

Mummy you are a beautiful story teller Millie and Daddy must be very proud of you.