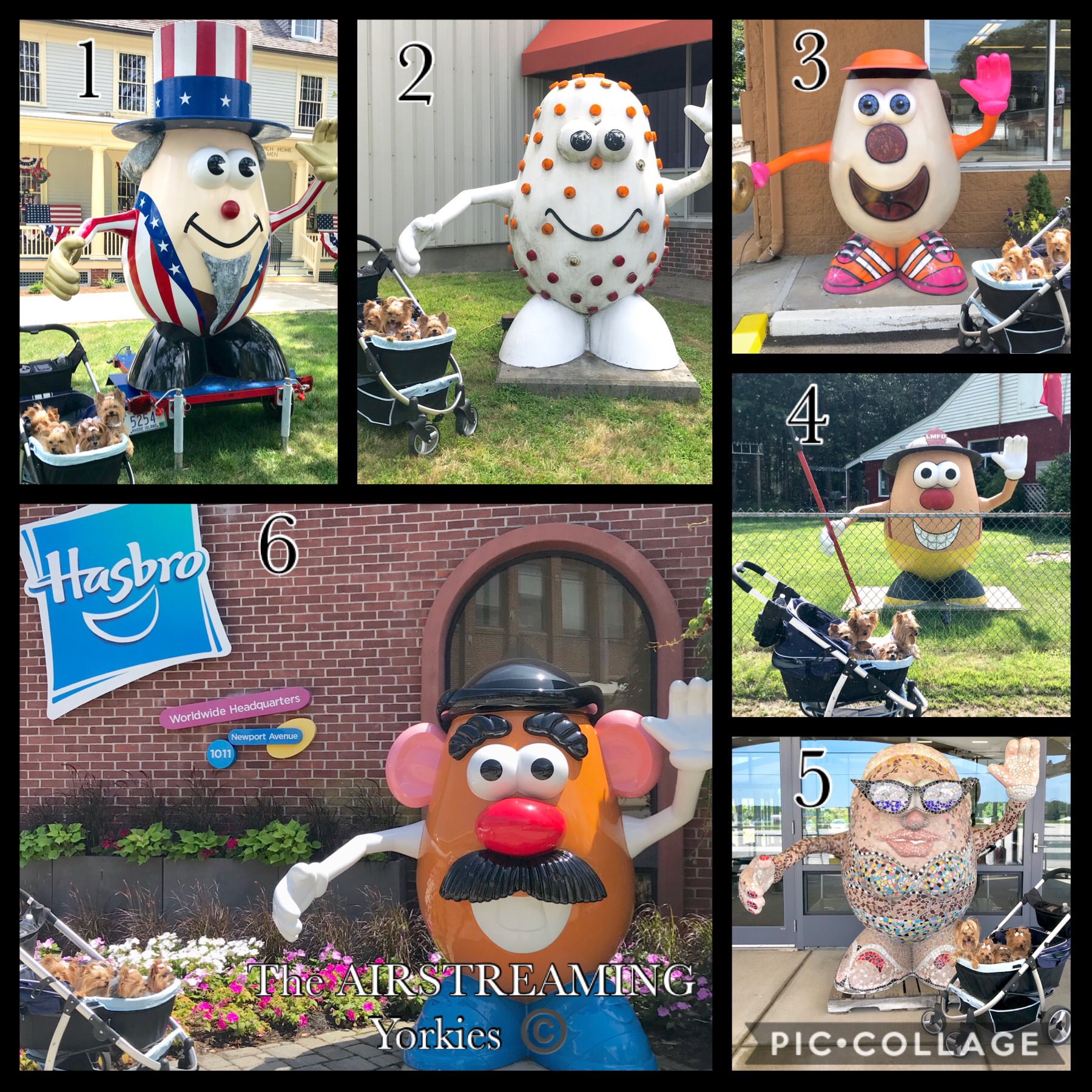 We have spent several days looking for a BIG POTATO… but not just ANY potato. We have been looking for the ONE AND ONLY, MR. POTATO HEAD of Rhode Island!!! Here is the story: Back in 2000, the state of Rhode Island decided that they needed to do something to boost their tourism and they thought that Mr. Potato Head should be their “travel ambassabor!” They began placing these huge 6-foot statues all over the state and had local artists decorate them in unique ways. Some say there were originally 36 statues… some say there were 45… but 19 years later there are very few of them left. Some have been stolen, some have succumbed to the elements and one was supposedly sold on Ebay for $5,000. We were able to find 6 of them while in Rhode Island. Here is a little bit about them:

2. RED HOT MR. POTATO HEAD is at the “Day-O-Lite” Company and has reflectors stuck all over him and is located in Warwick, RI

3. REGULAR JOE MR. POTATO HEAD is located at a “Dunkin Donuts” in Warren, RI. I was licking my chops in this picture because I could SMELL THE DONUTS and it made me HUNGRY! Mummy bought some donut holes and gave us a tiny little nibble because we had been so good!

5. SUN BAKED MS. POTATO HEAD is located at the small airport in Westerly, RI. You don’t need a ticket to see her but you will need to go inside the tiny airport and then walk out the back door to where she stands to great visitors as they get off their planes on the tarmac.

6. MR. POTATO HEAD!!! This is the original potato that started it all and he is located at the Hasbro headquarters in Pawtucket, RI.

There are 2-3 other potatoes that we were unable to get to, but I think we did PRETTY GOOD for a bunch of little doggies!!! It was a lot of fun looking for them and we saw some pretty scenery along the way. We have now left the beautiful state of Rhode Island and have settled into Massachusetts so we will see what THIS STATE has in store for us this week.    ??❤️❤️??

A very unique treasure hunt, but a fun one for sure! ❤

It was lots of fun to see all of the different potatoes! ???

Do you have to strap them all in? I have a stroller for my yorkie but I’m always afraid she will jump. BTW… I love following your stories.

Yes, we are each strapped in to one main strap so that not only can we not jump out but no one can reach in and take one of us out!!!! YIKES

I really enjoyed your description of the potato heads. You are doing such a great job and I am enjoying hearing about your adventures.. Being from south Georgia I don’t know much about our northern states but I sure am learning a lot! Please keep the adventures coming and have a great time!

Thank you for coming along with us on our summer vacation… we love hearing your comments as we travel along to different sights along the way. ?❤️?

My Potato Head #2 looks like he could have a VERY CONTAGIOUS skin disorder. Don’t get too close girls!! ??????
What a fun treasure hunt!

Lolololololol he sort of looks like has has the CHICKEN POX!!! Lol

McKenzie the Rescued Maltese and I lubs your posts! Sounds like a gweat fact funding twip! Sending lotsa lubs.

We really enjoyed seeing all of the Mr. Potato Heads!! Mummy said she had a little one when she was a little girl. ?

I’m enjoying all your adventures . Love your comments as they bring a smile to me as I read them . Have a fun holiday . Looking forward to your latest adventure . Hugs from BC Canada .

Thank you ms Betty… we are having a fun trip so far and seeing lots of interesting things. ?❤️?

It has been fun but it has been really HOT. We thought things would have been cooler up this far north! ?

I love RI. WE had a summer house there. Enjoy MA! Hugs

It sure is beautiful up here! Do tou miss not living here anymore?

Didn’t mean the sad face emoji sorry. Should be a happy one???

How cool I loved playing with Mr Potato Head growing up.

Mummy loved him too! ❤️❤️❤️

It really was pretty cool to see all of the different ways they had been decorated! ?❤️??

We really did! I loved how each one was so different! ?❤️?

What a fun post! I like Firefighter Mr. Potato Head the best. Which one is your favorite, Millie? Kisses!

My favorite was Regular Joe because he was holding a DUNKIN DONUT and I could SMELL DONUTS COOKING at that place!!! ???

Such fun!!!!! Great thought on a secondary reason for strapping you in… would not want anybody to steal me or my stinky brother! I won’t fight Mummy next time she hooks me in….

A fun and interesting treasure hunt!

It was a lot of fun and exciting to see how each one was decorated. ??

How adorable. I love how you girls are posed so beautifully. I can’t wait to see what this week brings!!

We are in Massachusetts this week and have plans to see PLYMOUTH ROCK!!!! That should be exciting! ?

That sounds aPEELing, The EYES have it for the Mr Potato Head search. Y’all are visiting some very interesting places. Continue to be safe. .

Lolololololol… that is funny! ???

What a fun treasure hunt. Love your travel stories ❤️

Thank you so much. We are so glad that you are enjoying our posts and hope you will stick with us through the summer. ??

I love hearing about all your adventures. It is like traveling along. Mr. Potato Head was real popular when I was growing up. Sounds very interesting Millie searching and finding Mr. Potato Heads. Have fun but be safe!

Mummy loved her Mr. Potato Head when she was a little girl so I think SHE was the MOST EXCITED about this little excursion!!! Lolololol

I LOVE THE POTATOE HEADS. THANK YOU!! GLAD YOU FOUND SOME OF ALL THAT WERE MADE. SO NEAT TO SEE. THE BABY’S IN THE PHOTOS.
THEY ARE SO SWEET SITTING THERE. AWE.
STAY COOL. BE SAFE AND ENJOY. THAN YOU FOR YOUR PHOTOS.

Thank you for following along with us this summer… we really love hearing from you. ??

Thank you… I’m glad you are enjoying our stories. We love hearing your comments. ?❤️?

OH MY GOSH! I didn’t know any of that! I LOVED my Mr. Potato Head when I was growing up…. I had Mrs. Potato Head too! They were so much fun to play with! How much fun you got to go on a scavenger hunt and find these! So very unique but #6 if my favorite!

They were all very interesting. I wish we could have found ALL of them. ❤️

Good Afternoon…I am so glad to here that you all got to see most of the Potato Heads today. Have a good evening and rest up for tomorrow.

It was a really fun scavenger hunt! ?❤️??

Thank you for the education – I did not know about the Potato Heads. However, the part I like best is you beautiful girls in the stroller. You are so lucky to have such a special Mummy and Daddy?❤️

We didn’t know about him either until we read about this in a brochure that we had… so Mummy decided that it would be fun to FIND some of them. ??❤️?

What a fun thing to do Millie, have safe travels and tell mummy I said hi!

It was very interesting to see how different each one was. ?❤️?

That is so funny and brings back some mems for me. I was raised in Idaho and we grew “Idaho Spuds”. My sister and I got a Mr. Potato Head game for Christmas one year, and as things happen parts get lost or broken. So, we improvised and used real potatoes and used sticks for the arms and legs, cloves for the eyes and such. We had a little furry buds back then too and leaving things out or unattended usually met with fate to one of our pals. Good times. Thanks for sharing.

Lololololol that is funny! Mummy loved playing with this when she was little! ❤️?❤️

how funny and interesting

Thank you! It really was lots of fun looking for all of them. ❤️❤️❤️❤️

Interesting finds. Sounds like your having a wonderful vacation. Hugs to you all.

It was very interesting to see so many decorated potato heads!