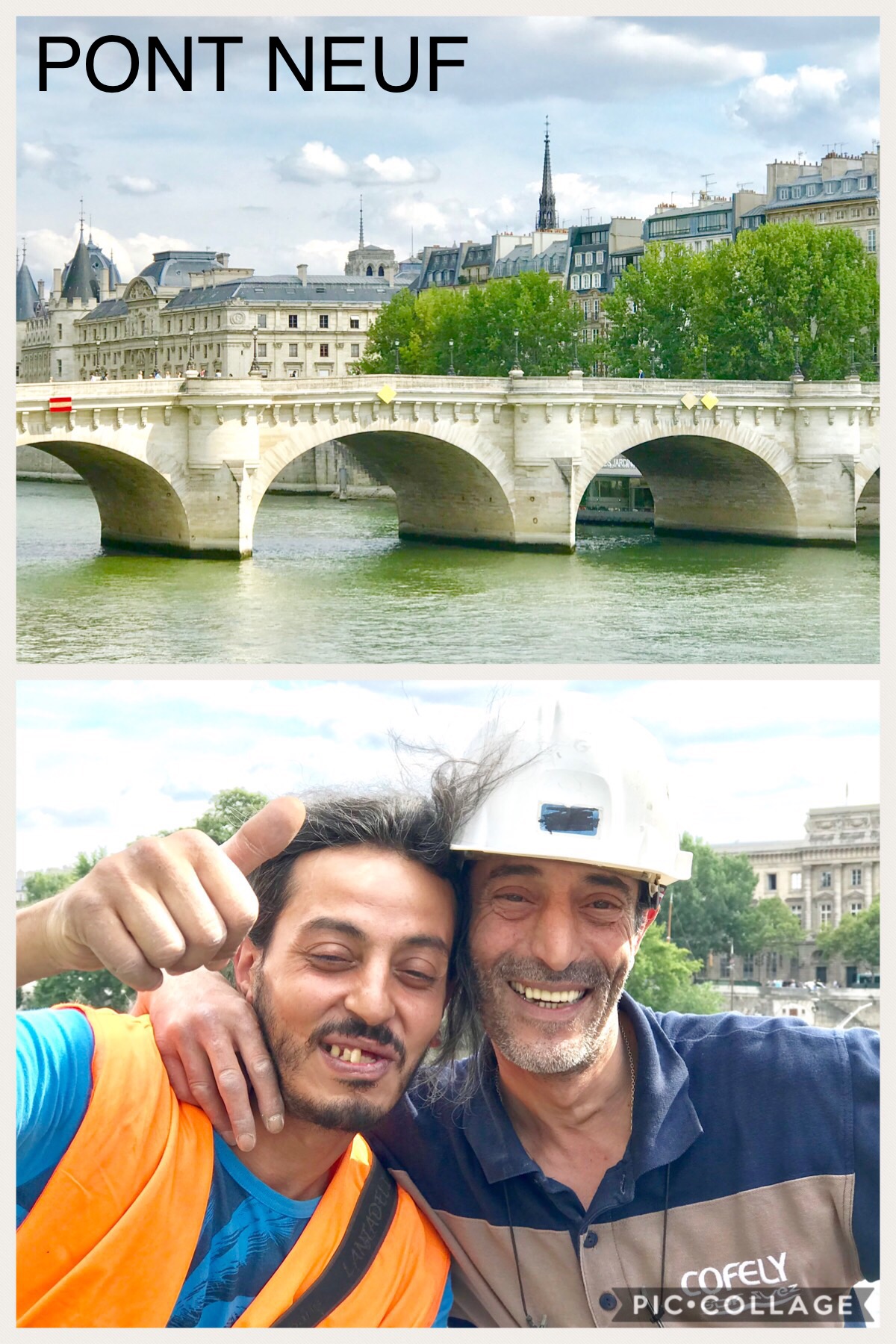 Funny Paris story from today: Mummy and I were on our “self-guided” walking tour around the Louvre today. This is the district where many of the French Impressionists got their inspirations for many famous paintings. We walked up and down tiny side streets, following in their footsteps and seeing the same things that they had seen… until we were stopped DEAD IN OUR TRACKS and could go no further. Every street worker in Paris was sitting on the side of the road, doing nothing, all of the main roads were barracaded off by the agents des police, the metro further up the way was STOPPED and people were being forced OFF, dragging their luggage and what-not down the street to the NEXT AVAILABLE metro station! WHAT WAS GOING ON? We needed to walk only ONE BLOCK EAST to see the Pont Neuf  (New Bridge) which is really not “new” at all. It was completed in 1607 while Henri IV was ruling France, and is actually one of the OLDEST of the bridges across the Seine River.  Anyway… we started walking EAST in the direction of PONT NEUF, we could SEE IT JUST THERE! and a French agent de police said “Pardon Madame, ffhgdhgtvcxdghjngrhbvfgbjyfvjikhff” which meant, “Can’t you see that we have STOPPED ALL TRAFFIC AND YOU CANNOT WALK THAT WAY… GET BACK BEHIND THE LINE… dummy.” Geez. -sigh- We stood around for a second trying to figure out how to get to the bridge other than walking 3,000 steps all the way back the way we had come to the other side of the Seine but could figure no other solution. The road was still blocked. ALL ROADS were closed. WHAT’S HAPPENING PEOPLE????? Mummy stopped a worker to ask… “Do you speak English?” No… he did not. No problem! Mummy knows about 10 words and can sing the alphabet and cound to 60… let’s try this. She waved her arms about and rolled her eyes. That is the universal gesture for “ What is going on?” Yipppeee… this guy is SMART… he answered in French though, which was no good… but Mummy caught the word “pees-tole” (pistol)…. ok… NOW  we’re getting somewhere… Mummy said, l’homme (man) had a pees-tole???? The worker said OUI!!!!! And pointed to Mummy’s ring on her hand and said the English word “jewel” and Mummy said, l’homme (man) with a pees-tole (she used her fingers as a gun thing for effect) and said BANG BANG and then held up her hands like a robbery and said “jewel”???? And he said OUI! Soooooo…. the best she could determine with her limited French but excellent charades ability is: a man robbed a jewelry store with a gun and they have shut down every street and metro to block his getaway route. I am here to tell you… you DO NOT NEED TO SPEAK FRENCH to come here…. but brush up on your charades!!! Sooo… we could see the Pont Neuf over by the sidewalk and just decided to forget the rest of our walking tour and take one last picture before heading home. As we took a few steps to click the picture ANOTHER agent de police held up his hand to stop us from advancing!!! Mummy looked at him and held up her phone and said, “Look here… I just want to take a picture of THAT BRIDGE and then I’m leaving.” And he let her by. As she clicked the picture, THESE TWO WORKERS (see above picture) who were sitting on the wall by the Seine River motioned to Mummy to take their picture… so here they are!!! They blew us a kiss and waved goodbye as we left. Seriously… the French are trés, trés friendly!!! ?❤????

Another interesting day for the two of you. Hope they caught the the robber. Maybe you should turn Millie around so she can keep an eye out behind you. XOXO

That is quite the story. You and Mommy can sure get into some interesting adventures. ❤

Oms! Charades! Heehee. Jewel robbery! You do land in the middle of things, don’t you luv

Glad you and Mummy are okay! Funny sometimes you don’t have to even speak the language and you still can some how communicate and understand what’s going on! ???

ohhhhhh French models!!! you are so lucky! My goodness the adventures you’ve had on your trip! It’s been very exciting! I can’t wait to read more about your trip, by the time I’ve finished reading one comment I’m looking and waiting on the next one! Tell Mummy to type faster! LOL