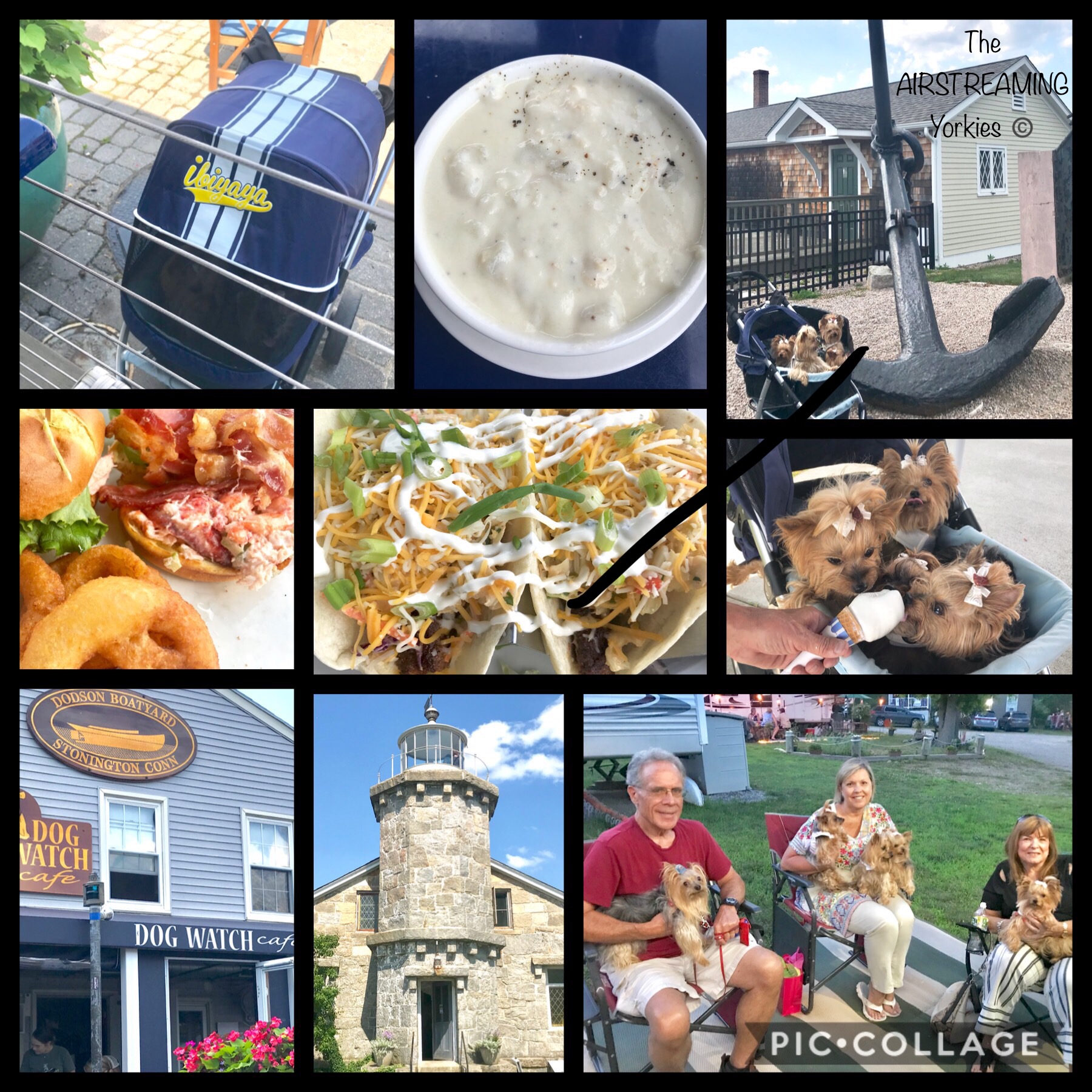 WOWZA… it would be easier to say what we HAVEN’T done in the last few days! Last night we had a fun meet up with our friend Zachary, Oh… and our parent’s friends came to see them too! ???  It is always so nice when friends stop by to see us. ❤️❤️❤️ Then today we headed over to Stonington, Connecticut to do a little sightseeing. We strolled along the super-cute streets and saw an ADORABLE little tiny lighthouse. It was built in 1840 and was used until 1889 when it was replaced by larger beacons on the breakwaters. We just looked at the outside, but the inside is open as a museum and you can climb the steps to the top of the lighthouse! Doggies are not allowed inside for safety reasons.  We were getting HOT and wanted to rest for a bit so Mummy suggested lunch at the “Dog Watch Cafe” which was listed as being DOGGIE FRIENDLY. I am going to tell you that it is SEMI- DOGGIE FRIENDLY because of course you have to sit outside on the covered porch…. but our stroller could NOT be on the porch with Mummy and Daddy…. it had to be on the OTHER SIDE of the railing which was on an elevated porch. So our stroller was about 3 feet BELOW where they were dining. We were in the shade and there was no one near us, but still… that is NOT REALLY DOGGIE FRIENDLY. But in their defense, the porch was extremely small and only held about 8 tables so there really wasn’t much room for a stroller… but if you don’t have a stroller and only have a dog on a leash or a dog in a carrying bag… then it has to go ON THE OTHER SIDE OF THE RAIL!!!! So, that is something to consider. But the food was DELICIOUS! Mummy had the Lobster BLT and saved us a few bits of her lobster and Daddy had the fish tacos… then they shared a bowl of really good clam chowder. We also got some ice water for all our trouble.  After we left there we headed over to Mystic, Connecticut where we drove down to the seaport and saw this HUGE ANCHOR that weighed 7,500 pounds! It had been on the USS HARTFORD in a war. By now, we were really HOT HOT HOT so Daddy said we needed to cool off… and guess what? He bought some ice cream and let us all have a few licks!!! That really did the trick and we were all very happy after that! It was getting late and Mummy said it was almost time for our dinner so we headed back to our campsite with fun memories of our adventures. ?❤️??

glad ya’ll are having so much fun

We are having a great time! It is soooo pretty up here. ??

Mystic CT is beautiful quaint little town Did you see Mystic Seaport? I lived there in the 80’s on main Street in an old Sea Captain home just beautiful. So glad you having so much fun

We did not make it down to the seaport area but we walked along parts of the waterway.

Wasn’t Mystic, Ct the setting for the movie Mystic Pizza? I saw it many years ago . I loved it! Sounds like so much fun!

Yes… we wanted to get over to see Mystic Pizza but the traffic was backed up due to the drawbridge and we decided to turn around.

What a fun packed day for all of you. Love the history background mommy. Ice cream.. That’s my Yorkies favorite dessert. You must all pass out at bed time with such busy days. Hugs to all. ?

We are soooooo tired but we wated MYSTIC PIZZA tonight on TV! Lolololol

I am really enjoying your trip, Millie & Family. I am not enjoyed restaurants that claim to be doggie friendly and really aren’t. But still happy that you had a little lobster! I was hoping that you would get some soon. ???♥️

I know…. it was sort of a “faux” doggie friendly restaurant!!!! If they have to sit outside the railing then that’s not really friendly… just sayin.

AWE LOVE IT EXCEPT FOR THE NOT SO FRIENDLY. BUT HAVE TO GO THE RIGHT WAY. YOUR BABY’S SOUND SO VERY SWEET. I LOVE THEM THE LITTLE DOLLS. WHAT YOU SEEN IN THIS AREA IS GREAT. I LOVE IT ALL. THANK YOU BOTH AND THE SWEET BABY’S. BE SAFE AND BE CAREFUL. LOVES…. OH THE FOOD SOUNDS SO AWESUM.. LOBSTER I LOVE, BUT A BLT W/LOBSTER. OH YUM. I GOT SPOILED ON LOBSTER FROM AUSTRAILA. THE BEST I SAY. A ONE POND LOBSTER TAIL IS DELICIOUS. ITS HARD FOR ME TO FIND IT TO. I’VE ONLY SEEN IT IN LAS… Read more »

We are getting lobster every chance we can!!! YUMMY!

So glad you are having a great time, and enjoyed a little taste of ice cream!!!

The ice cream was the best part! Or maybe the lobster! ?

Holy Cow! You’ are busy little bees. I always loved it up there. Especially in the fall. You have a great time. Until your next blog…. ??❤️

We are loving the area up here. It’s our first time to see it! ?❤️?

Sounds like a great day and always fun to see friends.

We love getting to meet our friends along the way. ??

I just watched Mystic Pizza too! I’m sure the ice cream was a huge hit! it is with me too!! do you have one of the cooling pads for in your stroller? or a battery operated fan? I just got a cooling pad for my stroller I don’t know how well they work. I was thinking of getting one of those small clip on fans too… I bet your Daddy has plenty of ice!

We have a fan for our stroller and cooling pads as well. ??

Your trip sounds WONDERFUL. Wish you were passing through Ohio so we could meet up. Maybe next time. Love reading about your adventures. Have fun ❤️❤️❤️

I hope we can get to Ohio on a future trip! The AIRSTREAM headquarters is located there and occasionally we need to go there for service so I will let you know the next time we make plans to visit. ??

You are getting to see a lot of nice places, it is too bad that more places are not more dog friendly. Ice cream sounds like a great way to cool off though. Safe travels. Hugs ❤️❤️❤️

It is always a challenge to find doggie friendly places but being together in our YORKIE EXPRESS every day makes it all worth the effort. ?❤️?

Am loving following all of your adventures! Too bad there are not more really doggie friendly places! You are all so very well behaved! Enjoy and be safe!

We wish that more people were doggie friendly too! In Paris this is not a problem… doggies go EVERYWHERE!!!

Good Morning…It sounds like you are having a fun time. Millie you and your sisters are such well behaved girls to bad some places are not doggie friendly. No matter another day is here and you will have another adventure today. Have fun and be safe.

We are having so much fun just being together. ?❤️?

I really enjoy your adventures.Too bad this area didn’t have more dog friendly places. Have fun and safe travels ahead.

It is challenging in EVERY AREA to find doggie friendly places, so it isn’t just here. We manage to have a wonderful time wherever we go because we are always together at the end of the day in our YORKIE EXPRESS. ?❤️??

Thank you… we really enjoyed our time here. Tomorrow we are moving on to Massachusetts. ?❤️?

What a great day so much good food.. Fresh Fish Yum!

Your day sounds absolutely wonderful! Especially the ice cream part! ? ? and Baiba ? like ? too! Have fun girls!! ?

So far things are working out pretty good I have to say! ?

I love Mystic Seaport! My lifelong friend lives in the next town over. We don’t get to see each other too often anymore but I was there three years ago. Hard since I live in Florida! Too bad you didn’t walk over the draw bridge to see the town and Mystic Pizza! That really wasn’t a dog friendly restaurant! They lied!

We might need to go back there one day!!!!

Grrrr. That is NOT pet friendly. Not at all! You all are babies and it is outside for goodness sakes. Ridiculous if its that way in a carry bag! Grrr. The lighthouse sounds wonderful!

A fun filled day for sure.

It was a really nice day and we saw lots of interesting things and said “hello” to several people along the way. ??

It sounds like you are having a great time. Thank you for sharing all your experiences.

We are really enjoying our trip. Thank you for coming along with us and sharing your comments. ??

I too do not understand why there aren’t more “doggie friendly” places in the U.S. There are just a few here in AZ but still have to be out on the patio if they do allow dogs. I have been told it’s because of the Health Dept. I have not traveled Europe where dogs are allowed, but do they not have health department rules as well? I just don’t quite understand. My little girl always minds her manners and behaves much better than some adults and even children whose parents are not so attentive. Nonetheless, I guess with politics the… Read more »

Europe certainly has health departments and people aren’t dying over there becausedoggies are going out to eat!!! SHEESH Our system is BROKEN!!!!

Yes, our system is broken. Hospitals allow “therapy” dogs, assisted living encourages it, and it’s a known fact we live longer and happier with a furry companion in our lives. Yet, they are limited to where they are allowed. Such a small thing that would add such great joy.

Oh Millie,
I’m glad your Mummy and Daddy are so careful with all of you! You really DO need to stay cool, and it was nice of your Daddy to give you ice cream (what could be better?) as a nice cool treat. We all have to watch out for those places that really are not TOTALLY doggie friendly, so thank you for the warning. Kiss kiss.

It has been soooo hot up here lately. Tomorrow we are taking a day off to explore our nice wooded campsite and escape from some of the heat.

Sounds like you girls had a yummy lunch Millie. Ice cream too. What a wonderful vacation. Sending hugs

It has been such a nice trip but I do wish the weather would COOL DOWN SOME!!!