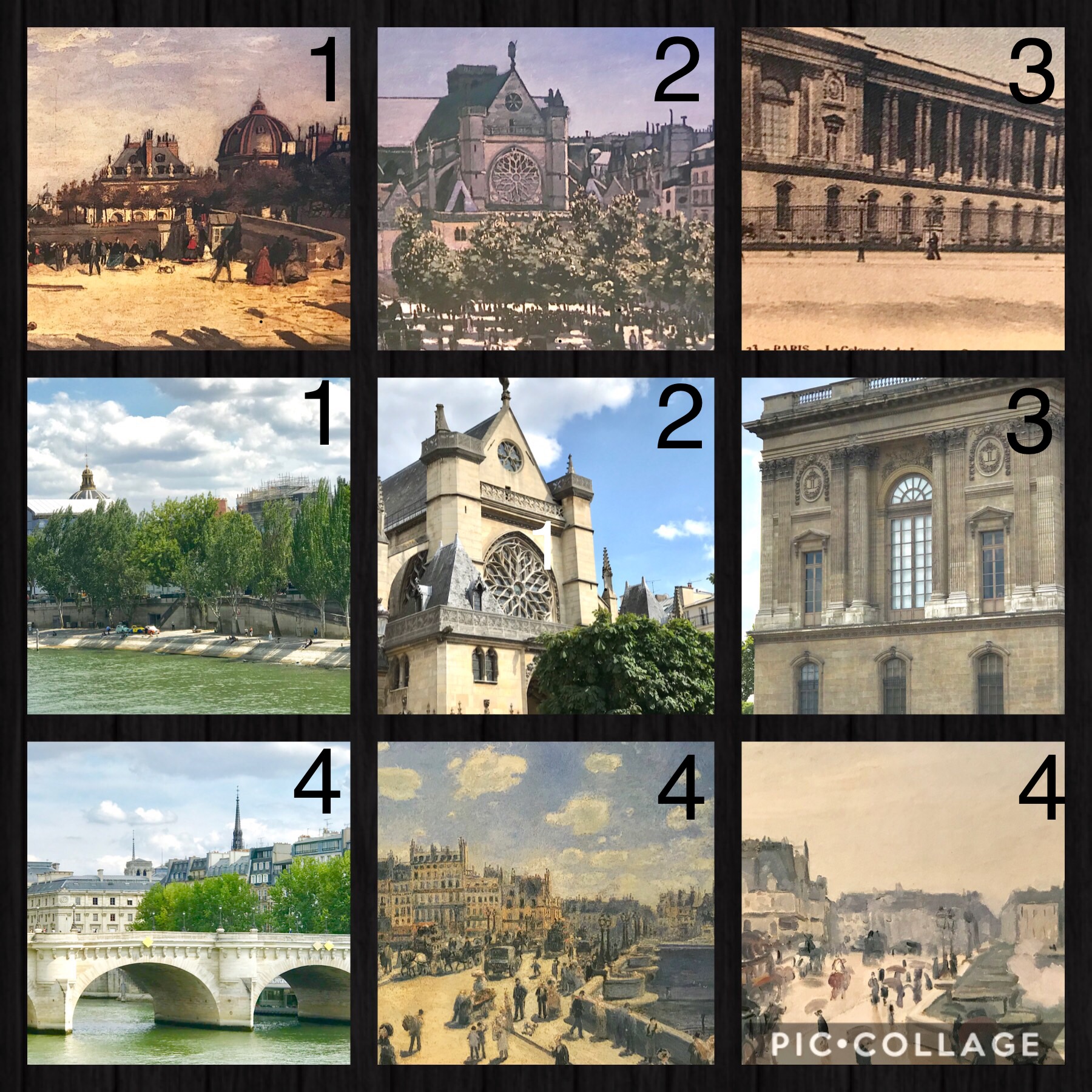 Following the Impressionist Painters of Paris

Mummy brought a book with us to Paris called, “The Impressionists’ PARIS Walking Tours of the Painters’ Studios, Homes, and the  Sites They Painted.” It’s a tiny little book with 4 interesting walks that you can take… and see the scenes of PARIS through the eyes of some of the greatest artists of all time. There are tiny cafés of interest added along the route so that you can stop for a rest and reflect on what you have seen so far. We have done MAP 1 so far and Mummy’s goal is to complete the 4 maps before we head back home. I will review with you some of the things we saw on our FIRST excursion… since I can appreciate art so much MORE after this tour. The photos that I have included in this post that correspond with the picture that Mummy took, were taken from the walking tour book. There are lots of examples of the artists’ paintings in the book so that you can “see” what was inspiring them!

I have numbered the sites 1-4 and included the artist’s painted canvas and Mummy’s photo. Get ready for a history lesson in this post… there is NO QUIZ at the end so I hope you will enjoy learning a little, like we did.

#1: The canvas seen here was painted by Renoir and is called “Pont des Arts” c. 1867-68. It is one of the earlist Impressionist pictures of the city of Paris. Mummy and I stood on the Pont des Arts bridge and faced east, looking toward the very scene thst was painted so very long ago. Many buildings have been erected since this time but in Mummy’s picture, in the very background, you can see the tiny top of the domed building that is very clear on the right side of Renoir’s painting. There are lots of trees now along the Seine River to give shade along the quai Malaquais. The Impressionist painters of this time faced much rejection for their work and it was universally ridiculed, even if they were lucky enough to be able to exhibit somewhere. Renoir was one of the “poorest” of the artists, as was Monet. This painting by Renoir sold for only 70 francs in 1875, and did nothing to help his financial situation.

#2: This picture was painted by Monet from the center of the museum balcony, giving him a high vantage point. Mummy and I didn’t have quite this view, but you can still see the similarities in the pictures. Monet titled his canvas, “Saint-Germain l’Auxerrois” c. 1867.  This is the Gothic church just across from the Louvre.  Every Ash Wednesday, a special service for artists is held in this church. ❤

#3: At the corner of the quai du Louvre and the rue de l’Admiral de Coligny is the east facade of the Louvre museum. Monet would paint three different canvases in 1867 from this location. He was granted permission to paint INSIDE the Louvre but like many of the Impressionist painters, he had no interest in copying the “Old Masters”… he wanted to paint what was right in front of him and he set up his easel INSIDE the Louvre from this vantage point at the corner, looking OUT onto the streets of the city!!!  One of Monet’s favorite things to paint was the Seine River, and he would paint it over 200 times during his career.

#4: This is “Pont Neuf” which means NEW BRIDGE… although it is one of the OLDEST bridges in the city. It was completed in 1607. Renoir (picture 1) and Monet (picture 2) both painted canvases of Pont Neuf and include glimpses of it in many of their paintings. These two paintings are looking across the bridge at almost the exact location, but where Renoir features a bright blue sky with people on a relaxing stroll, holding parasols… Monet paints a cloudy overcast sky with a rushed feeling and umbrellas.

We were only able to take a picture of the side of the bridge because a Jewelry store had just been robbed and all of the streets were shut down, which included our access to le Pont Neuf… but to be able to walk where these great painters had once been and see Paris through their eyes was very interesting indeed. We will make time for Map #2 next week.

You lucky ladies (Millie is always a lady). You have an eye for things that I wouldn’t. I hope your feet hold out Darsey. I am a faithful reader and enjoy the posts Immensely. I think of you two and your adventures. Till you next entry. ❤️

I find it amazing how things change over the years. So thankful that we had these great Masters to take us on a journey back in time. Oh dear, sorry to hear about the jewelry store. Be safe

I love the history and art lessons, you are such a good story teller. Get some rest both of you ???

I was in Paris in 1982. I will never forget this trip. Millie your trip brings back a lot of beautiful memories. I hope you and Mommy enjoy your trip.

I have made a couple of these walks myself and love your photos and commentary. Enjoy, be safe, and keep us in the loop as you continue to explore this most wonderful city! Bisou, bisou.

How amazing! Walking inside history!

Wow that’s fascinating looking at the then and now photos thanks for sharing the history lesson ✅?

I love seeing the impressionist’s work vs. Mummy’s photograph. This lesson was fascinating! I am thoroughly enjoying your stories on this wonderful trip!
Puppy Kisses from Lucy & Maggie!

I enjoyed seeing your photos alongside the paintings and your information about the painters. I learned a lot. You and Mummy are great teachers Millie. I feel like I’ve visited these spots right along with you. Looking forward d to your next tour and lesson. Stay cool in hot Paris!

Millie and Datsey, I would like to Thank you from the bottom of my Heart for taking us along on your Great Adventure to Paris. You and all of us are going to be sad when the time come for you both to leave and head home, but I know that your going to be Happy to, too be going home to the ones you left behind. You will BOTH have such Great Memories to take home and we all Thank you for them all. Enjoy the rest of your adventures and have a safe trip home. God bless. Lin… Read more »

Thank you for coming along with us! We hope you will stay with us for the entire trip! It is a long journey, made in 3 parts with short trips back home so that Mummy can see my sisters and Daddy, because shecreally misses them… but this trip was something on her “bucket list” and she needed to do it now. Sometimes “bucket lists” just can’t wait any longer and this was one of those times! ??

I am completely blown away by you sharing so much with us! Thank you from the bottom of my heart! Glad to see Miss Millie resting on a cooling g mat after such a walk!