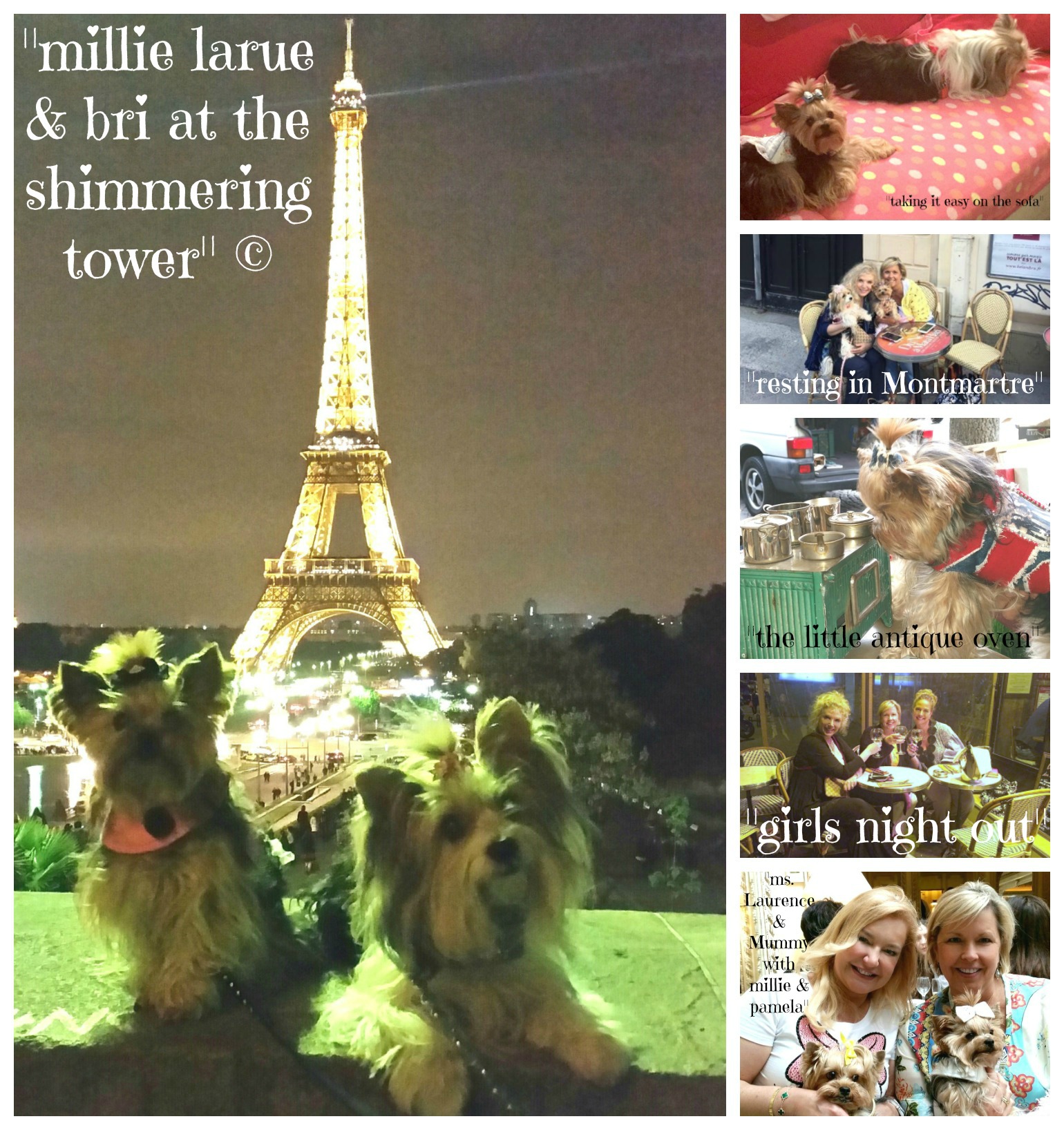 After finishing up our fondue lunch in the Montmartre area of Paris, we hoofed it on back to our apartment to await the arrival of another friend, Ms. Stacy, who would be staying with us for a few days.  She had been in Europe on business and knew we were in Paris, so we told her to stop over and see us… this was going to be so much fun!  Her little furbaby, Sadie, was back home in the States with a nanny, but it would be nice to see her again.  I knew her from years past, when I used to travel to New York City for lots of doggie events, but after being attacked by the neighbor’s dog, I had slowed way down on meet-ups of that nature so it had been a long time since I had seen her.  She arrived around dinner time and the three moms were all squeals and hugs… happy to see one another… and happy to be making dinner plans that didn’t involve me and Bri.  Whatever… Bri and I were tired from the long day so we didn’t put up much of a fight.  I wanted to spend some quiet time with Bri anyway because she was going back home in a few days, so this gave us time to spend a few last moments together, just the two of us!  Ms. Stacy knew a place in the city where she thought the moms would enjoy dinner… she offered to take them there.  First, she would call UBER because the Metro would take too long.  UBER?!?!  This was something that Mummy and Ms. Sandra had never even attempted.  Ms. Stacy knew tons of stuff about how to use her phone and the internet to accomplish things.  Mummy and Ms. Sandra just sat there in astonishment while she typed in stuff on her phone, then proclaimed that everything was arranged!  This was wild!!!  We should have had her with us for the ENTIRE TRIP!  Who KNEW that you could do all these things from your PHONE?

The moms kissed us goodbye and ran out to catch the UBER that had pulled right up to the front door of the apartment!  You didn’t even have to wave your arms around for a taxi… UBER came to YOU!  Within minutes, they were being dropped off where Ms. Stacy had directed the driver to stop and they began their search for the restaurant.  Soon, they were sitting at a little bistro table, ordering dinner and Mummy and Ms. Sandra were asking Ms. Stacy to show them more cool phone tricks!  Of all the things to eat in Paris, SNAILS was the thing that everyone decided to eat… well, everyone EXCEPT Mummy!  She refused.  She said no creature that slimes around your garden is meant to be eaten.  She pours salt on those things if she sees one.  Ms. Sandra told her those was SLUGS that she was thinking of but Mummy still refused to eat any.  After their second order of the escargot, Ms. Stacy INSISTED that Mummy try at least ONE, and she would videotape this momentous occasion.  If we can find this recording, we will try and post it on my website under TRAVELS… but it is the FIRST and LAST time that you will ever see her eat a SLUG/SNAIL again.  After a fun-filled evening, UBER was called again and everyone was safely returned to the apartment.  Tomorrow we had plans to return to Montmartre and do more exploring, so after a little more girl-talk, we turned in for the night.

The next morning, we took UBER instead of the Metro… deciding to avoid a repeat of yesterday’s experience, and were dropped off in the center of town.  There were boutiques everywhere and lots of hills to climb up and down.  This area was definitely NOT for someone with bad knees… you really got in your exercise over here!!!  Bri and I stayed clipped in our carrying bags for most of the time.  As we reached the Basilica of Sacré-Coeur area, we were swamped by all sorts of hooligans with clipboards and cute girls with cameras, asking us to take their pictures… which we had also been told was another way to steal our belongings!  I’ve never seen so many potential pick-pockets in my life!  I felt like I had a starring role in “Oliver Twist.”  Any moment I expected the Artful Dodger to walk around a corner!  I was hoping that Mummy had put a “LoJack” on my carrying bag, just in case someone managed to snatch it from her shoulder, but she had a pretty good grip on me AND the bag so maybe I was safe… but I couldn’t be completely sure.  Just sayin’.  I was working it all out in my mind, what I would do if I got lost or something.  Maybe a stranger would offer to help me.  “I’ve always depended on the kindness of strangers.”  I heard that somewhere once, and it DOES WORK if you run into the right sort of strangers.  But some of THESE strangers looked a bit sketchy and I decided that I better depend on my own devices… which was basically sticking to Mummy like glue!!!

We stopped for lunch at a little café that sat at the bottom of a hill, looking straight up at the Basilica of Sacré-Coeur.  It was the most amazing view.  We were safe here from the merry band of thieves that hung out mostly at the TOP of the hill and along the staircases leading up to the church.  From here, we could enjoy the lovely spring weather and have a tasty meal too!  Ms. Sandra and Bri had to bid us farewell and head back to the apartment to finish up their packing.  They were leaving in the morning and still had lots to get done.  Mummy and I finished the day with Ms. Stacy, shopping in the Montmartre area and eating dinner at the most divine little Italian restaurant!  When we were finished, Ms. Stacy called UBER to pick us up… right in front of the restaurant.  MAN!  Mummy needed to find out how she did that UBER THING!

By the time we got back, Ms. Sandra had finished her packing and said she wasn’t REALLY ready to leave, but they had reached the end of their vacation and they MUST return.  We were all reminiscing about the purchases we SHOULD have made, but didn’t.  Mummy had let yet another flea market find escape her.  She had found an ADORABLE little antique French toy oven that would have been PERFECT for little me!  What with all of the cooking that I do from my cookbook, I could have really used it too.  It was big and bulky and she already had a ton of stuff that had to be mailed back.  She just wasn’t sure how she could ship anything else back home, especially something that large.  That was the problem we constantly faced.  Shipping.  It was always in your mind whenever you saw something you wanted.  The next question was always, “How will I get it home?”  Maybe we could return later in the month and see if it was still there, but right now… all we could think of was the time with our friends was over.  It was going to be a sad morning tomorrow with everyone leaving.  We had enough time tonight for one last visit to the Eiffel Tower to watch the sparkly lights come on.  It would be the last time I would see it again with my best friend Bri.  When morning came, UBER arrived to pick up Ms. Sandra, Ms. Stacy and little Bri… and everything was quiet.  This was the first time that we had been alone in Paris since they had arrived two weeks ago.  Our friend Ms. Laurence stopped by later in the afternoon with her furbaby, Pamela, and we all went to “Carette’s” for lunch.  She asked what we had done for the past two weeks and made more suggestions for the NEXT two weeks.  It seemed like in Paris, there was ALWAYS something to see!!!  We had a few days to get things spruced up at the apartment before another friend would stop by for a short visit, then my aunt Helen and cousin Caitlin would come… so I wouldn’t be alone for long!

You had a lot of visitors but your place was so small!! Where did everyone sleep?

The friends cane at all different times. There were never more than 2 friends there at once and they slept on a pull out sofa.

I forgot to also ask what a lo-jack was.

Its always nice to have friends over during vacation!! Perfect for sharing adventures ?????? Kissess

Millie and Mummy I so love to read about your adventures ! I’ve always dreamed about going to Paris. Millie you have have more friends then I do! LOL Thank you so much for taking the time to share with us!
Millie are you going back to Paris when Mummy and Daddy go back? ?❤??

Millie that was very scary getting attacked. I understand why you slowed up your appearances.
JUST glad you recovered from that awful experience! I don’t know why some dog’s do that to other dogs? ?❤?

Sweet Millie…tell Mummy that I’m with her 100%! I would NEVER eat a snail – even if it goes by a fancy name in Paris! There isn’t enough wine in France (or Napa, for that matter) that would ever get me to do that!! Wonderful story! Kisses!

That’s not the little oven on the cover of your cookbook, so guessing you found the yellow one on another flea market adventure? I must say, that green one would have been pretty tempting. No good chef should just have one, plus the pots and pans are tres chic!!

It’s always nice to enjoy your vacation with friends and look at all the new things you learned! I’m not eating snails either! ugh! just the thought makes me shudder! I wouldn’t eat one if they covered it in chocolate and I do love a good dessert! LOL