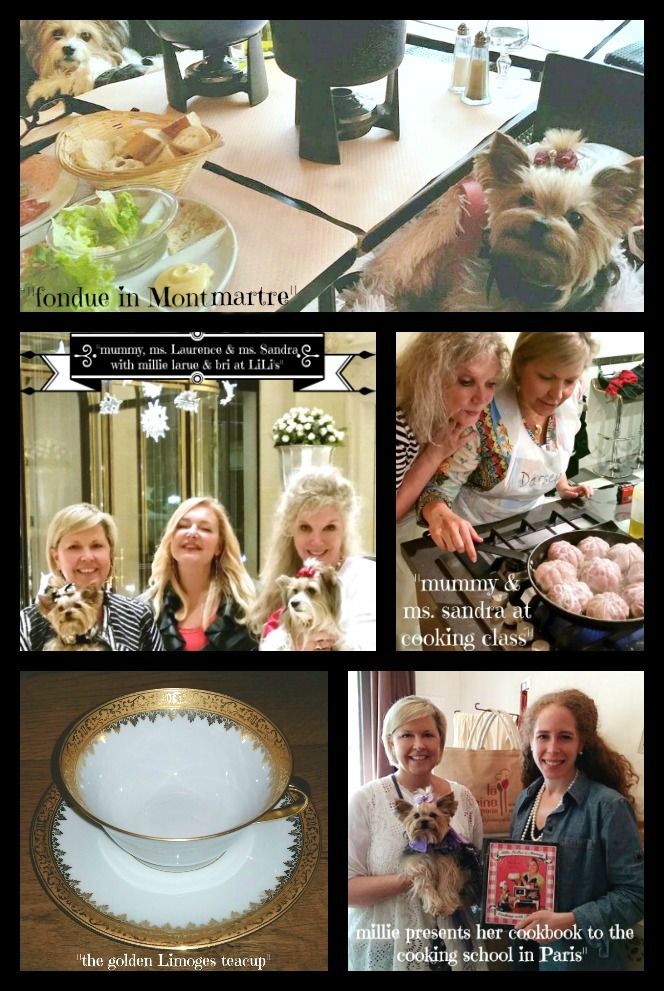 Dressing the Dog, Chapter 8-Part One

“Nothing but heaven itself is better than a friend who is really a friend.”

It was hard to believe that I was still in Paris with my best friend, Bri!  We had done so much in the time she had been here, and eaten at some of the most FANTASTIC places… Angelina’s, Carette’s, fondue in Montmartre and most recently, we dined with my friend Ms. Laurence and her husband Mr. Philippe at LiLi’s in the swanky Peninsula Hotel.  Unlike the now boycotted Ladurée, who had refused to let us dine on their outdoor patio, this place rolled out the red carpet for us.  Bri and I were both decked out in our best frocks so they wouldn’t think we were some riff-raff off the streets or something.  I was wearing a black velvet harness that was embellished with huge Swarovski crystals and Bri was wearing a red satin dress with hand-worked flowers on the back and a crystal waistband.  We spent several minutes at the entrance while the staff admired our bedazzled duds before being escorted to our table.  As we were taken through the over-the-top posh restaurant, we noticed that two tufted ottomans had been brought to the table for us to sit on while our parents dined.  OMGOSH, this was soooo beyond anything we could have imagined.  I was going to try really hard not to whimper for food at the table but the smells from the restaurant were DIVINE!  Mummy did, indeed, offer up a few tid-bits of the scrumptious Cantonese cuisine, so all went well and it was one of the highlights of our trip.

Bri and I had been to so many places in Paris that we didn’t even cry when our moms took some time for themselves and enrolled in a few cooking classes at La Cuisine Paris (www.lacuisineparis.com).  They took a macaron making class, a croissant class and a chicken kiev class… and after each one was over, they brought home their accomplishments, which I have to admit were pretty spectacular!  After they had finished their courses, Mummy took me back to meet the teachers and gave them one of my very own cookbooks.  They were soooo excited to get one of my famous books and promised to try some of the yummy recipes too!  Bri and I enjoyed our days alone at the apartment where we could re-energize ourselves, because when we were out exploring Paris, we were usually gone for the ENTIRE DAY!  Our moms got into a nice schedule of alternating doggie days and non-doggie days and that worked out really well for everyone.  While they saw Monet’s gardens, Versaille, the Catacombs of Paris and even a show at the Lido, Bri and I played with toys and lounged around like a couple of mongrels.  We didn’t even bother to get dressed!

When Ms. Sandra wanted to explore a few flea markets, Mummy knew just the one to take her to.  Not the huge one on the outskirts of town, but the smaller one in the center of Paris… the Marché aux Puces de la Porte de Vanves.  We could go with them to that one because it wasn’t too crowded and then later, we planned to see the Montmartre area.  Even though Mummy had been here just a week before with Ms. Lisa, there was always new stuff arriving.  Mummy wanted to see if the golden teacup was still there so the first thing we did was head for the area where she remembered the table being located.  GASP!  There it was.  Mummy recognized the vendor from the previous week, but he did NOT recognize her.  Very casually, she looked about the table and let her hand glide across the prized teacup.  “How much?” she asked.  Twenty Euros, came the reply.  WHAT?!?!?!  It was 100 just last week!  OMGOSH!  Mummy didn’t even bother to haggle with him… she just casually said… OK, I think I’ll take this… and that teacup was wrapped in paper, put in a plastic bag, and it was HERS!  SCORE!!!  Mummy raced to find Ms. Sandra and tell her the story.  Ms. Sandra was busy haggling over some antique linens which she would use to make new doggie harnesses for her business.  I couldn’t wait to see the finished product because the little hankies were adorable!!!  As it turned out, she would later wish that she had bought MORE of those linens because she sold every single harness she made and people were STILL asking to order one!!!

After spending a few hours at the flea market, we decided to catch the Metro over to the Montmartre area and do some exploring there.  That area is a very hilly part of Paris with a completely different feel to it.  There is a very bohemian vibe to the area with cute little boutiques off the tiny cobblestone streets.  We knew the stop where we needed to get off, but we noticed that a lot of people got off ONE STOP BEFORE the “Abbesses,” which was our stop.  Hmmm, I wonder where they were going?  It didn’t take us long to figure out WHY they got off at that stop.  The doors of the Metro opened up into the deep subway tunnel and we looked around for the exit signs… oh, there they were, over there… just past an elevator.  An elevator?  What was an elevator doing in a subway and WHY were soooo many people gathered around it?  Why not just take the stairs like you do at EVERY subway stop???  We continued walking and rounded the corner, only to come face to face with a circular concrete staircase.  What was this?  We asked someone… is this the way UP to the street level?  “Yes, unless you want to take the elevator.”  We asked WHY we needed to take the elevator and they told us there were a LOT of stairs at this Metro stop.  This was the deepest place in all of Paris.  Geez Louise.  We didn’t know all of THAT!  Only two people could walk side by side up the staircase because it was pretty narrow.  Mummy and Ms. Sandra said they needed to get in more steps on their “fit bits” and Bri and I were being carried in the shoulder bags so we all headed up the stairs.  After several turns of the staircase, a CARDIAC WARNING sign was posted on the wall, along with a defibrillator.  YIKES, this didn’t look good.  How many stairs WERE THERE?  A few more turns and Mummy’s lungs were on FIRRRRREE!  She turned to ask Ms. Sandra if she had seen an oxygen tank anywhere because this was ridiculous.  Ms. Sandra told Mummy that she was on her own because she was having a few health issues herself.  Bri weighs about TWICE what I weigh and Ms. Sandra said that at that moment, it felt like she had fifty pounds hanging off her shoulder.  Good grief, Bri and I were losing our moms right there in the darn subway and from the looks of it, no one would be able to help them, because everyone else seemed to be dumb tourists just like us… and they were ALL DYING!  The people who were crowded at the elevator or got off a stop EARLIER had all been Parisians… they KNEW about this.  Just for your information, I know that you want to know… this metro station is 118 feet below the ground and there are 200 steps that you need to climb in order to get out.  The walls of the circular stairway have lovely hand-painted murals, done by local art students.  If you live long enough to see them all the way to the top, or can hold your head up in order to view them while you are climbing, they are very beautiful and make the climb almost worth the effort.

As we exited the Metro, the first thing we had to do was find a place for our moms to sit down and catch their breath.  Their legs felt like jelly and they did look a bit pale, I have to admit.  Bri and I exchanged a few concerned glances but really, what could we do?  We were helpless to do a thing because they had latched us into the carrying bags which were still draped over their shoulders.  Basically, we just sat there praying.  I was ready to wrap it up and call it a day, but the Basilica of Sacré-Coeur was only a few blocks away.  If we could get there, maybe we had a better chance of our prayers being answered!!!  The Moulin Rouge was only a few blocks away too, soooo we had to make a decision here: were we saints or sinners?  We decided we should try “saints” FIRST and headed in the direction of the church!  We stopped to look at the lovely white building perched high on a hill, and decided NOT to climb another 200 plus steps to get inside… we needed lunch, so off we went in search of sustenance.  As we walked down the tiny cobblestone streets, there was restaurant after restaurant.  We couldn’t make up our minds… everything looked great!  Then we saw a French fondue restaurant and that was offering a free glass of wine with each meal.  BINGO.  Mummy and Ms. Sandra looked at each other and said, “FONDUE IT IS!” at exactly the same time.  So that was how Bri and I came to be sitting at a fondue restaurant in the middle of Montmartre eating fondue (yes, we actually ate some too!) and entertaining all of the people who walked into the open-air restaurant to see the two little dogs who were perched at the table having lunch!

OMGosh…I’m exhausted just reading about that staircase! I was once faced with a staircase like that when my husband & I had been with a tour group exploring some caves in the “Gold Country” of California. I remember the need for oxygen VERY clearly. I’m so glad that Mummy was able to purchase that beautiful cup & saucer set. Patience definitely paid off! Kiss Kiss!!

What an ordeal that was Millie. But I’m so glad mommy got the Limoges cup and saucer. ?

Oh my that is alot of stairs! So glad that restaurant realized what royalty you and mommy are and treated you and your friends as such.

I would have loved having the a table next to you two little beautiful girls! I wish the U.S. was as fur-friendly as Paris. There are just a very few establishments es here in Phoenix that welcome doggies only on the patio, and my little girl is very clean and well-mannered — much more than some people. She doesn’t smoke, has good table manners and is kind and appreciative to the servers.

oh my goodness I had to laugh when reading about the staircase but just think of all the STEPS Mummy got on her fitbit!!! WOW!! I’d still be waiting on the elevator! LOL

I laughed so hard about the oxygen tank comment! Tears..lol. Your mummy is so funny!