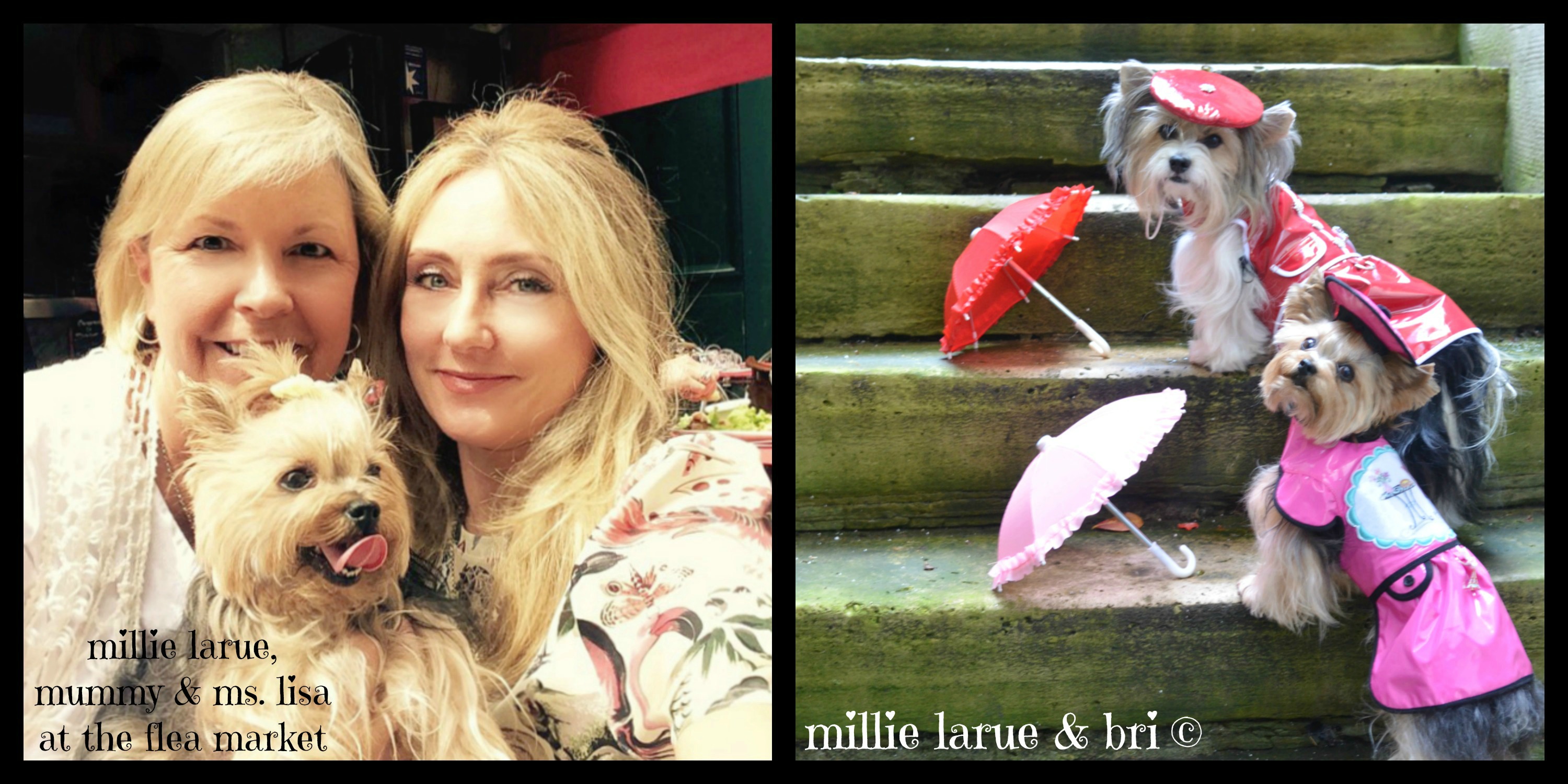 We had a really fun day at the Clignancourt flea market but Ms. Lisa only had one more day in Paris so the next day we made our way to another famous market located in the center of Paris… Marché aux Puces de la Porte de Vanves.  This market was much smaller than Clignancourt but still, nothing to turn your nose up at!!!  It was spread out over one main street and then ran down several side streets, where items were set out mostly on folding tables but a few vendors had tents to cover their wares.  There were just treasures EVERYWHERE!  Right away Mummy found a darling, darling, darling little Limoges teacup and saucer with a heavy engraved gold band around the edge.  OHHHHH… she must have it!  She was an avid hot tea drinker and this would be the perfect item for her to remember our trip to Paris.  It was just wonderful… fit for the QUEEN that she was!  “How much, please?” she asked the vendor.  100 Euros was the reply.  WHAAAAT?!?!?!  “No.”  That is all she said, and she put the cup back down.  It was soooo overpriced that she didn’t even TRY to haggle over a better one, it wasn’t even worth the effort to offer what it was really worth.  She sadly left the little cup on the table and shuffled away… totally crushed.  Poor Mummy.

At the other end of the street, Ms. Lisa was bargaining for some beautiful antique silver chains that she would use for her jewelry business.  She took vintage jewelry and repurposed them into the most DELIGHTFUL pieces that you have ever seen!  (www.lisadebidaph.co.uk)  Mummy owned quite a few of them herself and it was fun to watch the process of how she envisioned the new pieces!!!  We hunted for treasures into the afternoon and Mummy kept crying about her “lost teacup” until Ms. Lisa announced that they should stop for a bite to eat and perhaps a little glass of French wine to brighten Mummy’s mood.  We found a little café that served the wine in darling glasses with a big red KISS  mark on the glass… and it really did make Mummy smile, until the wine was gone and then she was sad again.  Ms. Lisa reminded her that she was in Paris for a whole month, and if she kept looking, she was SURE to find an even PRETTIER teacup… she was CERTAIN of it!  We finished up the day and headed back to our apartment so that Ms. Lisa could pack her bag and head back to England.  Let me tell you, watching her get that little chandelier into her bag was INSPIRING!  Mummy is a terrible packer.  When we travel anywhere, she packs everything except the kitchen sink into our bags so there would be NO WAY that a CHANDELIER would fit into our suitcase, but I’ll be doggone danged if Ms. Lisa didn’t do it!!!  I wish that I could have presented her with an award or something.  It was truly miraculous.  We gave kisses all around, said our goodbyes and Ms. Lisa was out the door to catch her plane.  We didn’t know WHEN we would ever see her again because she lived so far away, but we would cherish the time we had spent with her in Paris.

We didn’t have much time to prepare for our next guest so we had to get moving.  The next morning, Mummy and I headed off to the fresh market around the corner and picked up a few food items, then we headed to the flower shop for some fresh flowers to brighten up the place.  The ladies at the florist approached us with OOhhhs and Ahhhs!  They wanted to pet me and they could see that I was wearing something sparkly… so it was my HARNESS that they really wanted to see.  They didn’t speak much English, but it was much better than the French that Mummy spoke… so we decided on ENGLISH!  LOL  They asked Mummy to PLEASE take me out of my carrier and put me on the counter… where I walked back and forth, modeling my little harness for them.  Out came their cell-phones and FLASH, FLASH, FLASH went their cameras.  All they wanted to know was WHERE they could find a harness like this???  “In the USA,” said Mummy.  She told them she had it made for me.  The look on their faces was so sad.  They thought they would be able to just walk into a Parisian boutique and buy one.  People are always shocked to learn that despite being the fashion capital of the WORLD, the people of Paris DO NOT dress their little dogs.  There are a few doggie boutiques around the city, and they carry a few plain t-shirts or ruffled t-shirts but NOTHING like the custom harnesses that I wear!  I have been to Europe before, and many times Mummy has been offered money to BUY the outfit right off my back, but she has always refused.  I predict that ONE DAY, someone will catch on and start selling cute harnesses in Paris, France.  Maybe the couturiers will even begin making them!!!  Until then, I will continue to bring my own designer things with me.  We made one last stop at the local wine cellar to stock up on some lovely French wines.  Now we were truly ready for our next guests.

Ms. Sandra and my best friend Bri would be staying with us for the next two weeks and we would have the best time ever!  It was going to be fun to have another doggie to pal around with too.  As soon as Bri ran through the door we were jumping for joy!  We hadn’t seen each other in maybe a year but of course we knew each other right away.  While Mummy was giving Ms. Sandra the very short tour of the apartment, I was showing Bri around the kitchen.  It only took a second for her to sniff out the little dried lamb’s ear snack that Mummy had brought for me to chew on for the month we were in Paris.  A whole lamb’s ear will last me a LOOONNG time, but Bri found that lamb’s ear tucked into a little cubby near the floor and she grabbed it, ran onto the sofa and like “David Copperfield,” POOF!  It was gone. I kid you not!  It would take me MONTHS of chewing and gnawing on that thing but Bri pulverized my lamb’s ear chew snack in 10 seconds flat.  If there had been a lamb’s ear eating contest in Paris that week, I would have entered Bri and she could have won, paws down!  Mummy and Ms. Sandra walked back into the room just as Bri was licking her chops.  I was still standing there… just watching and sort of whimpering.  A tiny piece of the lamb’s ear was left on the sofa and Mummy realized what had happened.  “How did she find this?” Mummy asked.  Ms. Sandra was soooo sorry.  Bri was not sorry at all.  Obviously she had been on the same flight that I had been on, where they don’t offer you anything for breakfast… so I guess she was STARVED.  We would spend the next two weeks looking for lamb’s ears, but I guess Paris has never heard of them, because we never did find one.  We also discovered that the apartment would need to be totally RE-ORGANIZED because of Bri.  But that was OK.   I would let HER KNOW that she was on MY TURF while she was in this apartment, and if she had something that I WANTED, it was going to be MINE!

How is it I knew Bring was gonna do that! While I was reading I thought oh no Bring better not have any lamb’s ears??. Maybe Mummy should look for a store front and a French person to run a Millie LaRue Harness and more store. ???

Nice Chapter!! Millie!!! and it looks like it will be a Lot of Fun the next Two weeks …with your special guest!! 😉 Big Kiss!!

I TOTALLY LOVE flea markets! I can only imagine what awesome finds there would be for an American who lives French thing’s!. ??Like that tea cup your Mummy found in that little shop. Also I remember your friend Bri doing her thing! LoL ???

I remember how upset you were when she chewed that all up.
I hope she brings her own chew toys the next time she visits.

So enjoy following along! Funny and fun adventures.

Ohhhhhhhhh I remember Bri eating your lamb’s ear! tsk tsk tsk BUT I also remember you took her Mr. Mustache! LOL but I think that is coming up later… I am loving reading your adventures again they really need to be published in books….. my tour of Paris…… my trip around the United States. I’m really waiting on the travel channel to pick you for a tv show ” The travels of Millie LaRue”

Love the vendors by the Seine River! Mommy will have to bring extra lamb ears next time for u Millie -but my dog would have felt that it was fair game if she came over. One time she found a bully stick at someone’s home & occupied herself the entire time. Well, she was not accustomed to bully sticks & had diarrhea the next day – it was awful!

My goodness that tea cup was expensive. I understand that it was Limoges and it had gold on it, but I know your mummy will find a lovelier one and at a real bargain too! How wonderful there was a wine glass with a big kiss on it….that must have made your mummy’s day. Sounds like a very nice lunch. Oh no…Millie, your friend ate your pig’s ear….she must have been really hungry. Enjoy your visit!

Millie you have me smiling ear to ear. You and Mummy really do need to write a book! Your both the best story tellers!? Well, there goes the Lambs ear Millie.. sometimes we must share. Im so good at sharing but please don’t touch my chocolate? Enjoy each day..

Happy happy memories and I laughed out loud several times whilst reading! 😀 xx