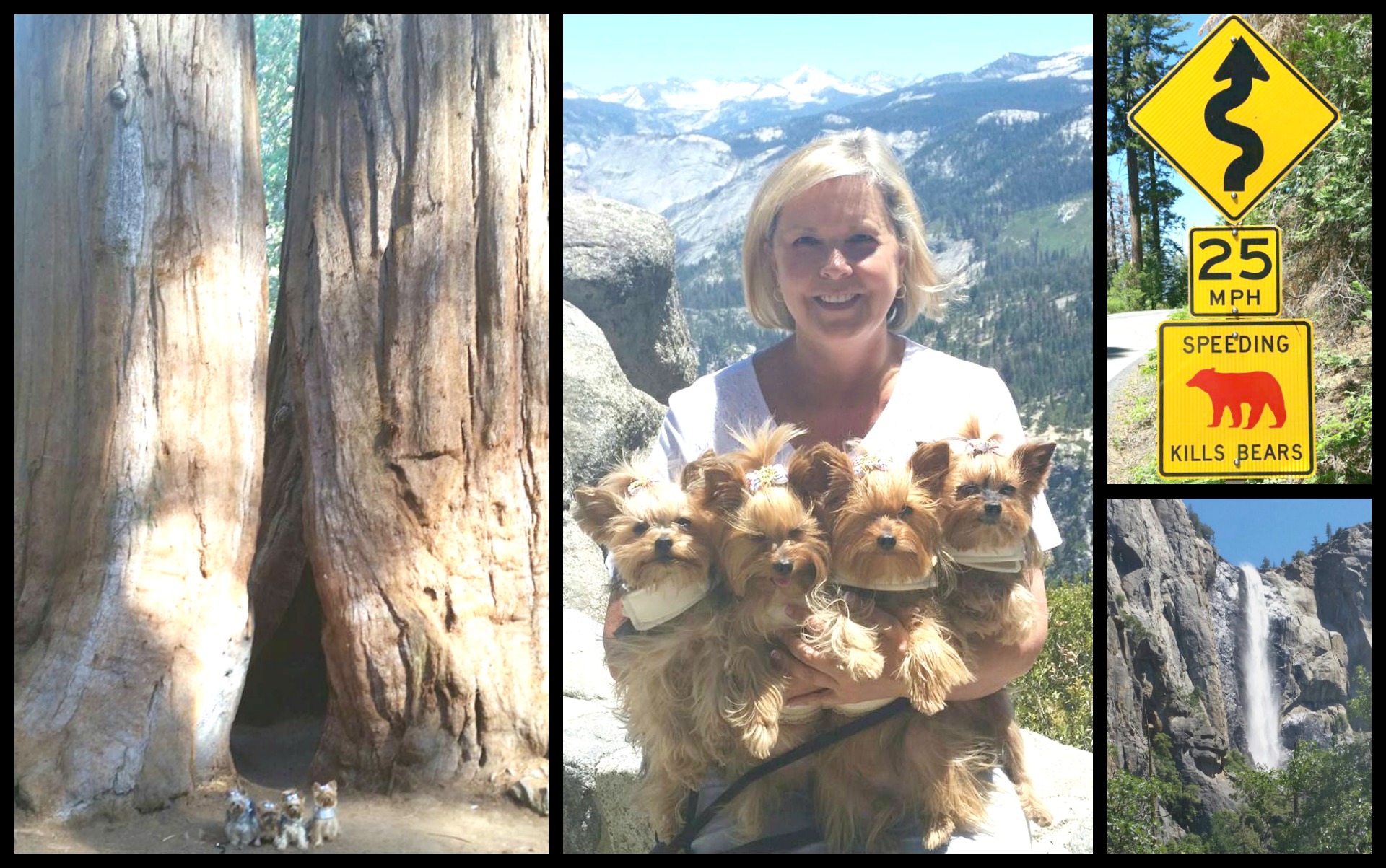 Dressing the Dog, Chapter 15-Part One

“All that glitters is not gold.’”

Daddy had been wanting to see Yosemite National Park since he was a young boy and I’m happy to tell you that his dream was about to come true.  We were headed to one of the greatest parks in our country, and while we were in the area for a few days, we would choose a few more top sights to see… namely, the huge redwood and sequoia trees.  Daddy said that some of the trees were so big that you could drive a CAR through them!  I didn’t want to argue with him, I’m just saying that I found that difficult/impossible to believe.  Little did I know how wrong I was.  While we were staying in Coarsegold, we would also be meeting up with a few more of my Facebook friends… this was really exciting!  Lots of these people had been “friends” on my page for YEARS so I felt like I really knew them, but I had never met them in person.  Every meet-up so far had been wonderful and each time, we had been sorry to say good-bye.

We arrived at Coarsegold late in the afternoon, so after setting up, we only had enough time to drive around the immediate area.  We were all tired and hungry and wanted to get a good night’s sleep before setting out for Yosemite the next day.  As it turns out, Yosemite wasn’t quite as close to our campsite as we had originally thought when we made the reservation.  We had tried to choose a spot in the middle of SEVERAL tourist attractions but now the parents were realizing that it wasn’t really close to anything.  There was nothing to be done now except get in the truck and DRIVE over to Yosemite.  Once we were there, we realized that it wasn’t exactly like the other parks that we had seen before.  There weren’t a lot of LONG STRETCHES of road where you could view the park from inside the truck.  In Yosemite, you made circles around lots of mountain ranges… lots and lots of circles!  About half-way up the first mountain, we began to see car after car, pulled off the road… with a parent standing outside, next to a small child who was carsick.  Geez Louise, it was too early in the morning for this!!!  Now I need to tell you something and I don’t want you to get scared.  The first thing I did was to get scared… but there were BEAR SIGNS everywhere, warning drivers to slow down and watch for bears.  Honestly, the LAST THING that I wanted to see on my BIG WESTERN ADVENTURE was a bear.  We had been warned at every single campsite that bears were everywhere in the area.  They came in looking for food, so the campsites had strict rules about leaving so much as a CRACKER outside at night.  The bears on the street-signs were painted in RED, which we later found out meant that a bear had been hit by a car at that location.  GOSH, we had seen lots of RED BEAR SIGNS!

When there was a specific attraction to see, there would be a large parking area where you left your car, and then hiked a short distance to the attraction.  The only problem was that we were vacationing during PEAK TOURIST SEASON and those parking lots were slam full!  We were also in a humongous truck and most of the parking spaces were meant for compact cars.  Several times we got pinned in as we drove into the lot, because the lot ITSELF was too small to handle our truck.  OMGOSH, how were we supposed to see anything?  We ended up parking haphazardly along the roadside, with Mummy and Daddy each taking turns walking down the trails to see each attraction.  Most of the sites did not allow doggies on the trails (I suppose this was because of the bears!) so it was grueling each time they found a “tourist spot” requiring a bit of hiking to reach the area.  Hmmm, we weren’t having much luck in Yosemite… maybe we had chosen the wrong part of the park to explore because most of the trails were NOT doggie friendly.  Driving around in the truck was making EVERYONE carsick after several hours so late in the afternoon, we decided to pack it in and find something else to see.  The park was sooo crowded and when Daddy asked another tourist if it was always like this in the summer, he was told that President Obama and his family had been there a few days ago and the ENTIRE PARK had been shut down for his visit.  I mean I understand the guy needs to feel secure and all, but that’s just wrong.  THE WHOLE PARK was closed because of one family?  This was a pretty big park.  He couldn’t focus on just one little area and let everyone else see another area???  Apparently not… so now tons of people who had been kept OUT were wanting to get IN before their vacations were over.  Well, that explained the overflowing crowds, I guess… but Yosemite as a whole had not been exactly what we were thinking it would be.  First of all, we hadn’t done our homework to know which areas were doggie friendly… and we found out later that there were PLENTY of areas.  Secondly, we had chosen a part of the park with a torturous drive, which caused all of us to feel carsick after only a few hours of driving.  Mummy said that next time we are here, we would rent a helicopter and see the whole thing from above.  That sounded sort of scary to me… I might stay at the AIRSTREAM if she decided to go THAT ROUTE!

We had seen some really, really big redwoods… but Daddy was looking for the Jurassic Park sized trees and after a little exploring, WE FOUND THEM! Everything that Daddy had said about them was TRUE.  Some of the trees were over 3,000 years old.  At the base, there were some reported to be up to 40 feet in diameter, with branches as big as 8 feet in diameter.  Now that’s what I call a really big tree!  We even saw one that had fallen across the road and cars were driving through a hole that had been cut through the middle.  Our big truck was too big to fit, but normal sized cars were zipping right into that tree… it was a sight to behold!  As soon as we reached a clearing where the traffic had slowed down, Mummy and Daddy got all of us out of the truck and set us in front of a huge tree that was just off the side of the road.  We were dwarfed by its size… you could barely even SEE US in the picture!  As we were headed back to the truck there was a rustling of branches behind us.  WHAT!?!?!?!  And with that… we were OUT OF THERE lickety-split!  Mummy didn’t even waste time putting us in the carseat!  Everyone just ran for the truck and jumped in the front seat, with us being carried for a quicker escape!  “What WAS THAT?” asked Mummy.  We all looked out the window, but saw nothing.  Was it a bear, a wolf, a deer… a squirrel?  The question was never answered.

We spent another day in the area, seeing more parks with views too beautiful to describe.  Mummy said that even her own eyes were not able to absorb everything that they saw.  The air was fresh and clean, the land was largely untouched by man and we felt honored to have seen this piece of America.  Tomorrow we were pulling up stakes and heading to Napa… the wine capital of America.  Lots of people are praising the California wines, saying that they are as good, or better, than many of the French wines.  The French say this is not true.  So to put the matter to rest, Mummy and Daddy would go to some “wine tastings” and decide for themselves.  That should settle things once and for all.  But first, we were going to make a stop in Jamestown, California where panning for gold is still a booming business.  Mummy was going to get that little cottage overlooking the Pacific Ocean with the golden nuggets that she would find. As it turned out, we were all in for a unique experience.

You girls looked like little specs in front of that tree.

It very well may have been a bear. I stayed in an RV with my little doggie in bear country, and my little girl had what I call a silent bark. She barked so very softly to let me know something was out there but didn’t want that something out there to know she was in the RV. I will never forget that. Turned out, she was right, there had been a bear rummaging through the park during the night. And, yes, they will kill dogs. Dogs have the best smell, the best hearing and the best instincts.

ohhhhhhhhhhhhh I couldn’t go on that trip I get motion sick ugh! just reading about the winding roads makes me a little queasy…. nope no winding roads for me! I don’t think meeting up with bears was on your itinerary! LOL

It really did look awesome when you were sharing it on Facebook. I like this blog though even more. So much more stories!