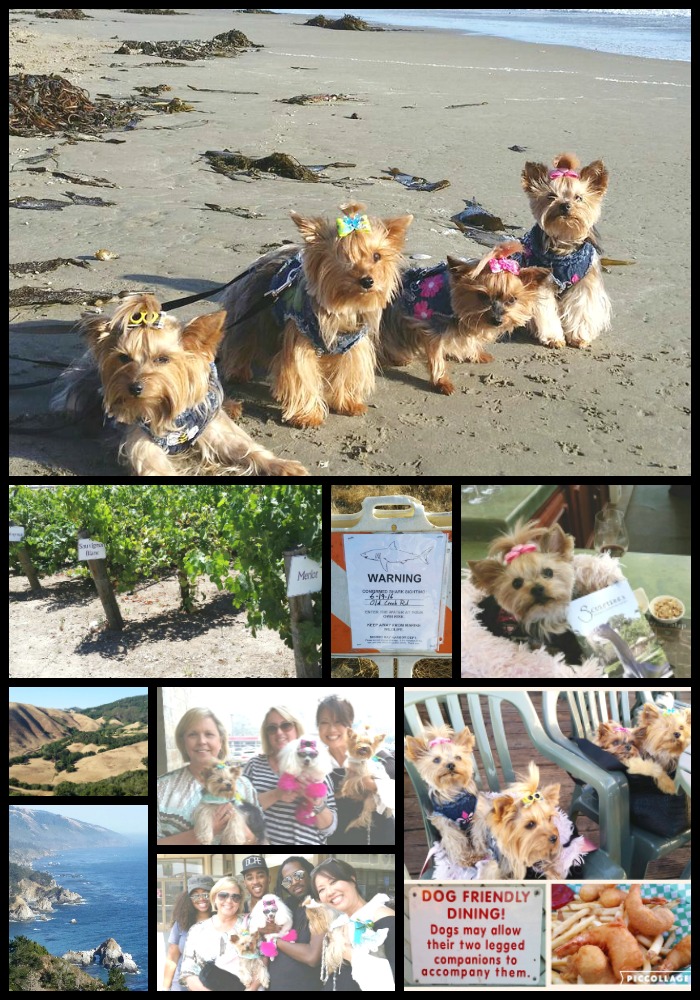 Dressing the Dog, Chapter 14-Part One

We were leaving the west behind and finally entering California! WOW… Just WOW! We had really done it. We had driven from the Atlantic coast to the Pacific coast in our AIRSTREAM and we were all still talking to each other. Well, to be honest, there were a few very quiet days… but we were still “together” in the same truck, so that in itself was a major accomplishment of sorts, considering all of the trials and tribulations we had seen in the last few weeks, not to mention the tight quarters in which we were all living. The other night Mummy had been all snuggled up in the big bed reading her book while Daddy was watching TV up front and he decided to peek in on her and see how she was doing. Imagine his surprise when he caught her sipping a Cosmo from her crystal martini glass… with his REAL ICE CUBES tinkling in her glass!!! “Why aren’t you using your special gel-filled cubes?” he asked… in a not-so-friendly manner… if I must say. Mummy let out a little laugh and admitted that the REAL ICE did actually make the drink COLDER than the FAKE ICE, but Daddy wasn’t going to let her off the hook quite so easily, not when there had been such a throw-down over the ice cube situation on this trip. He made her promise (actually it was more like a verbal contract of sorts with all types of “if you don’t follow thru clauses” thrown into the mix) that they would toss the fake cubes when they returned home and only use REAL ICE on all further trips. Mummy agreed but I was going to wait to place my bet on the outcome of this until later, because Mummy has an uncanny way of finding loopholes in Daddy’s forced contracts… just saying. As we inched closer and closer to the California coast, the dusty, barren desert began to develop more patches of green. A few green shrubs sprouted up next to a few more cacti and soon a few trees began to show up along the roads. We were still in the desert, for sure, but signs of LIFE were definitely here… and we had better cell phone service… and Facebook was working! Yes sir…we were back in business.

Mummy and I had plans this afternoon to meet two of my friends for lunch and I could hardly sit still in the carseat. It had been several years since I had seen Chloe Polka-Dot and little Cupcake so I wondered if they would remember me! Daddy was going to drop me and Mummy off at the restaurant while he took my sisters back to a rest area where he could take care of some pressing business matters over the phone. It seems like even when we are on vacation, his work never stops, so we were always having to pull over while he took care of things from the road. As we got closer and closer to civilization, the roads got more and more crowded. For over a week we had been traveling along highways that at times had been fairly deserted. It had been a sort of spooky feeling because we kept saying that if we had car trouble or something, it might be DAYS before anyone found us! We had no cell phone service and it might be HOURS before we even passed another car… but now, there were cars EVERYWHERE and lanes and lanes of traffic!!! MAN OH MAN there are a LOT of people living in California. And they all have cars! Daddy said it would be a miracle if we didn’t wreck, but somehow we made it to the restaurant in one piece and there were my friends, waiting to greet us!!! Everyone SCREAMED with delight, and we all remembered each other! The tiny little restaurant was crowded and we had to wait a few minutes for an outdoor table to open up. It is always so frustrating to deal with the “no doggies inside” rule and some places won’t even allow a doggie to sit on their OUTDOOR patios, but out in California, they are pretty accommodating to their four-legged customers. My little friend Cupcake owns her own hairbow company called “Hot Bows” and she had brought a gift bag full of hairbows for me and my sisters, so while I was busy pawing through the gorgeous bows, Mummy was busy checking out the menu, trying to find something that BOTH of us could eat, since she always shares a little of her meal with me… well, ALMOST ALWAYS! The food was ordered and in record time we were all chatting and eating. Even though it had been years since we had last seen one another, we picked up the conversation like we had left off just yesterday… that’s the thing about great friends! The time was flying by and Daddy would be here soon to pick us up. We were standing up to say our good-byes when Cupcake’s Mommy noticed a familiar TV personality walk up to a table outside. OH MY GOSH… it was the ZENO FAMILY from “The People’s Couch.” I guess when you live in California, you see lots of famous people! They were so nice and stopped to take pictures with all of us… HOW COOL IS THAT?!?!?! When they saw Daddy pull up in the AIRSTREAM and bring all of my sisters outside to meet everyone, they said that Daddy was a “chick magnet” with all of us yorkies! Daddy laughed and said it was true, he got LOTS of attention everywhere he went and they should get a few yorkies too! I was surprised he didn’t try to give them his doggie chest carrier, since THAT REALLY ATTRACTS ATTENTION and he refuses to use it anymore… but I think in all of the excitement, he forgot about it. I bet he is sorry now. He could have been rid of it forever if only he had remembered.

We kissed and hugged and promised to stay in touched and returned to the crowded expressways of California… headed for Paso Robles. We would camp there for three glorious nights and visit a few of the doggie friendly wineries in the area. As we drove further away from the city of Los Angeles, the traffic got better and we could relax a little bit. Let me tell you, pulling a big AIRSTREAM in 8 lanes of traffic is no fun. Everyone in the truck has to be very quiet. Katie started to bark a tiny bit, which is the cue for Daddy to pull over, because we need to potty. She is always the spokesperson for our group. When she barks, we pull over and all of us take the opportunity to potty at that time. But THIS TIME, Daddy said, “Katie… sorry… you girls will HAVE TO HOLD IT! There is NO WAY I can pull this thing across all these lanes of traffic!!!” YIKES. How long would we have to wait? Fortunately, it wasn’t too long, and we were all able to relieve ourselves soon… because with Katie, you just never knew what was going to happen! She could get herself constipated if she didn’t go often enough… or she could EXPLODE in the carseat… and frankly, I wasn’t real comfortable sitting next to her under these conditions. When Katie barked, you just wanted to get her out of the car, just saying.

Paso Robles was beautiful. When people think of the wine country in California, they think of Napa Valley… but Paso Robles has excellent vineyards and lovely wineries! Our favorite one was called “Sculpterra.” They had lots of fabulous metal sculptures in an outdoor garden area just before you entered the tasting room of the winery. And… they were doggie friendly. Mummy and Daddy had a wine tasting and then bought a few bottles of wine to take with us in the AIRSTREAM. Hmmm, I wondered how many bottles they would purchase on this trip. We would be visiting LOTS of wineries during our stay in California and our truck was already pretty full. I guess they could DRINK IT as they went along, but… gosh, you can only drink so much wine! The next day, we took a break from the wine tours and headed over toward the ocean because we wanted to see what it looked like from the famous Pacific Coast Highway, and we were not disappointed. WOW, what a view! We pulled off the road and Mummy and Daddy carried the four of us down to the beach, past the big SHARK WARNING sign, and out to the water! HOLD ON NOW! Did y’all not see that sign back there? The one mentioning the SHARKS spotted in these waters recently!!! Mummy assured us that we just needed to put our PAWS in the surf, we were NOT going swimming. I wasn’t so sure about this. Don’t most shark attacks happen in shallow water? How shallow are they talking? I should have done a google search on the topic before I got here, but how could I POSSIBLY KNOW that my parents would entertain the thought of putting us in shark infested waters??? Brrrrrr…. the water was FREEZING COLD! In the middle of the summer, the Pacific Ocean is COLD AS ICE WATER! We ran up and down the beach for a few minutes and then headed back to the car because it was getting a little chilly. That was hard to believe too. During the day it is hot outside, but at night the temperatures drop down and we needed a little blankie in our stroller to keep warm! That night, we dined on the deck of a restaurant overlooking the ocean. Their sign said they allow doggies to bring their 2-legged owners! That’s funny… all places should be like that, don’t you think? We got to sample some fish and shrimp, and claimed this to be the BEST NIGHT EVER, and everyone agreed that we were in LOVE with California!

Lolololol…. we love our little Katie! ??

Awesome. You have the best mommy and the best papa.’

Driving with 3 dogs and a 5 th wheel out east is bad enough! I can’t imagine California! I love your stories! Poor Katie lol

Thank tiu for following along with us! ??

Thank you for loving my home state of California! I live in Washington now, as you know, but I love California, and will return there someday. It was so good to meet you and your sisters and your parents last summer.

awwwww poor Katie but it’s soooooo nice you get to all travel together and you don’t have to worry about pet friendly motels now! PLUS you get to have all your own stuff with you and not have to sleep in strange beds! yikes!