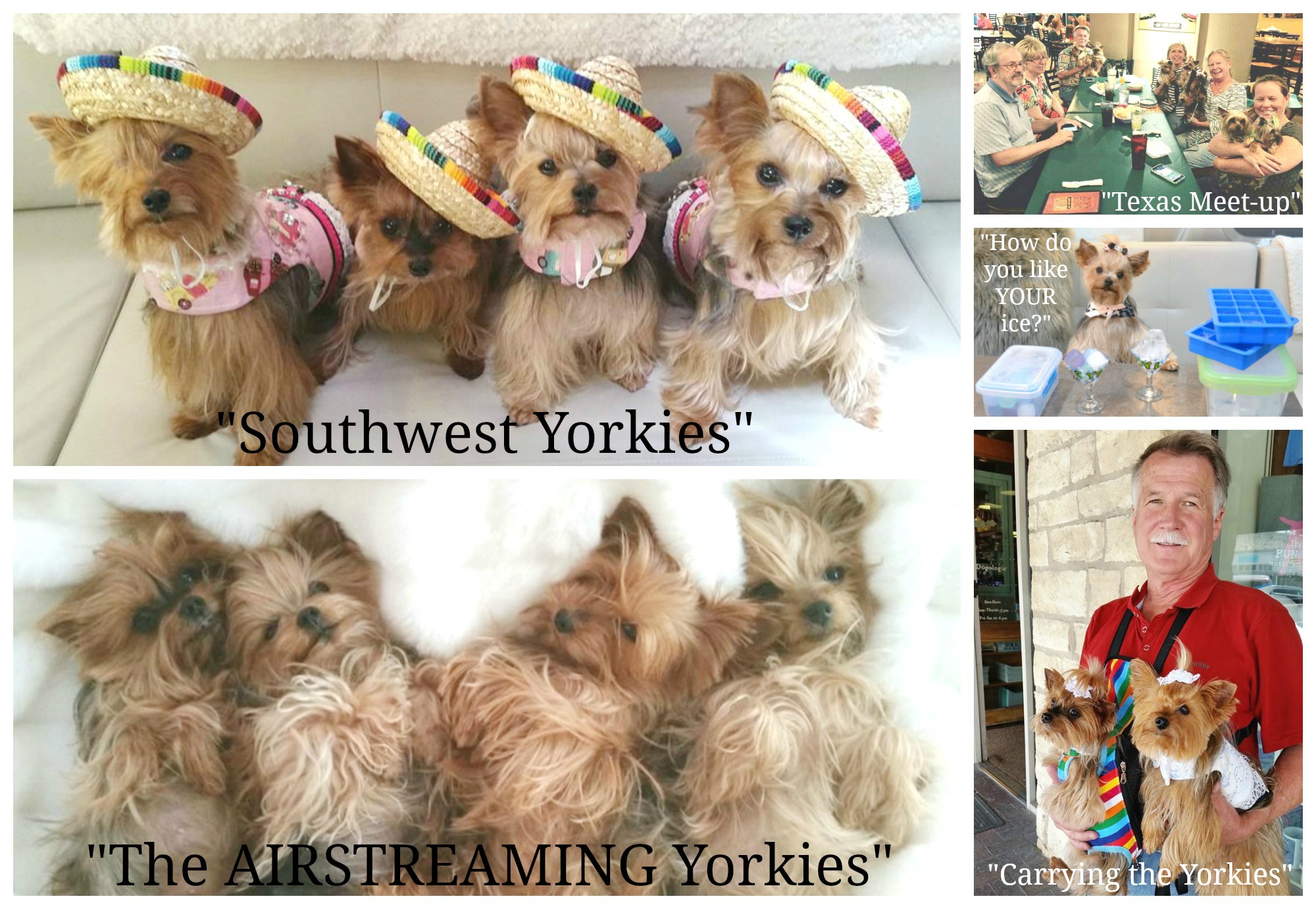 Dressing the Dog, Chapter 13-Part One

“It takes real planning to organize this kind of chaos.”

We had spent WEEKS carefully packing the trailer with everything that would possibly be needed on our 6-week cross-country road trip… plus a few hundred extra things that no one would ever think of except Mummy.  The AIRSTREAM was bulging at its rivets and Daddy said there was ACTUALLY a “weight limit” on these things, much like AIRLINES have with your baggage… which was shocking to Mummy!!!  “I thought we were getting a travel trailer so we could FREE OURSELVES from all of the restrictions that airlines and hotels place on us when we travel!” she exclaimed.  Daddy tried to tell her that EVERYTHING in this world has some sort of restriction but it fell on deaf ears.  She told him that only the bare necessities had been packed and nothing could be taken out.  “What about the crystal martini glasses?” Daddy asked.  Mummy stood in shock and whispered in an oh-so-quiet… yet deadly voice, “Are you crazy?  I’m not gonna drink my Cosmo out of a solo cup.”  At this point, Mummy brought up the very sensitive “ice making” situation that had been a source of many discussions since the AIRSTREAM had pulled into our driveway.  The freezer compartment of our refrigerator was VERY TINY and Daddy liked to have REAL ICE in his drinks.  This required TWO ice trays and then another plastic container to hold the ice cubes, so that there was a constant supply.  Daddy liked LOTS OF ICE in his drinks.  Not only did his drinks have to be nice and cold, but he also had the very annoying habit of CRUNCHING the ice in his drinks, so he always needed to refresh his drink with MORE ICE after he finished eating all of it.  –Sigh- Mummy, on the other hand, also loved a nice cold drink, but since freezer space was limited, she felt that those nifty gel-type ice cubes was the way to go.  She explained that only one small box would be needed to store about a dozen cubes and they could be rinsed and refrozen as needed.  It was the perfect solution.  NO… said Daddy.  You can’t eat them and he wanted to eat ice.  Mummy said he shouldn’t be eating ice anyway because he is going to break a tooth but he said he wanted real ice.  This hot topic went on for DAYS and there was no resolve to it.  In the end, two sets of ice cubes went on the trip.  Real ice cubes, and gel-filled ice cubes… and that was that.

Mummy had made sure that we pups were the FIRST PRIORITY on this trip… everything was geared around our needs, which honestly, I feel was only right!  She had packed a doggie first-aid kit and felt that she was prepared to handle most minor ailments since between the four of us, we had experienced most things that can befall a little pup.  Each night when we pulled into a campsite, she would GOOGLE the local vets and write down the number of the closest one in case something serious should happen.  That way, they wouldn’t be scrambling around in a panic trying to find a doctor in case an emergency should arise.  I’m telling you, if anyone was over-prepared for this trip, it was US!  We had only been gone about 5 days.  Then we got to Texas and Katie stopped eating.  That in itself isn’t really abnormal because Katie is just so weird.  She does stuff like that sometimes, but now she was laying around not doing too much and she hadn’t pooped today so Mummy got out “the kit” and gave her a baby suppository with zero results.  Hmmm… Daddy called the vet we had on file and said that we needed to bring Katie in to be examined.  Of course she did this on a Sunday (i.e. EMERGENCY VISIT).  We were staying in a remote little town in Texas and the closest vet was an hour away, so Daddy took Katie in while Mummy waited with us at the AIRSTREAM.  Hours passed before Daddy returned… without Katie!!!  Daddy had called Mummy and told her that Katie had been VERY CONSTIPATED and the vet required her to stay there for SEVERAL enemas and we would have to pick her up later in the afternoon!!!  GEEZ… poor Katie, the struggle was real!  The hours just crawled by and Mummy was going cray-cray just sitting in the AIRSTREAM so we all piled into the truck and headed in the direction of the vet’s office.  Mummy said we could do some “sight-seeing” from the truck and at least be CLOSER to Katie when we got the call saying that she was ready to be picked up.  It seemed like forever, but FINALLY the vet called and said that Katie was all “cleaned out” and ready to go home.  When Mummy brought Katie out to the truck, she was hopping around like a spring chicken and wanted something to eat.  We were SO HAPPY to see her back to normal and everyone had to sniff her all over to make sure that she was OK.  We were back in business.  Man-oh man… what a stressful morning!  There’s a lesson to be learned from the all of that, but darned if I can tell you what it is!  We ate on schedule, we had regular potty breaks, we got plenty of water, we took walks and we got plenty of sleep.  The AIRSTREAM is like a vacation home to us, so it’s not like we are in unfamiliar surroundings.  Mummy said we would just be more vigilant and make SURE everyone POOPED every day.  We all agreed to try.

We still had a few more days in Texas, and it is one REALLY BIG STATE.  Mummy knew that we couldn’t see it all so she had chosen a few things that were on the top of her list, mainly the San Antonio Riverwalk where we were scheduled to meet up with several of our Facebook friends at “Rita’s on the River” along the canal.  The restaurant was doggie friendly and they even offered a few menu items for doggies so we were down with the whole idea!!!  The dinner was so much fun and meeting our friends was soooo exciting!  Everyone had their furbabies with them and the restaurant staff even came over to take a group picture of us to put on their website!  How cool is that???  We were sad when the dinner had to end because we didn’t know if we would ever see our friends in person again… but we knew we would stay in touch through my FB page.  I should mention here, that at this point in our travels, Daddy had REFUSED to get a stroller for our trip which would have made carrying the four of us soooo much easier.  He said he was WAY PAST his stroller days and didn’t want to add another thing to the already over-packed truck, so Mummy had found some cute little chest harnesses that they could each strap one of us into.  The plan was for each of them to carry one doggie on their chest and walk one doggie… then they could keep switching up the doggies who got to be carried as one of us got tired of walking.  This lasted for about ONE DAY and Daddy got really, really tired of the ATTENTION that he got on the street, so he quit using his harness and opted to just WALK his two doggies.  Well, THAT didn’t work either because the two doggies were constantly going in opposite directions and sometimes we were in crowded areas and it just wasn’t possible to control two doggies on a leash… so he ended up carrying two doggies under his arms.  Daddy wasn’t happy AT ALL!  If he would “follow the program” that Mummy had laid out, things would be much more comfortable, but being a man… he refused to conform.  Mummy mentioned the stroller idea and again, he said NO STROLLERS!  We were only a week into the trip and sight-seeing with four doggies was a big problem because Daddy didn’t like carrying his two doggies.  I didn’t want to argue, I’m just saying that it WAS hard to believe that Daddy was being so hard-headed about this “stroller idea.”  Our lives would be so much easier, but we just let Mummy handle this.  We drove through lots of Texas and saw beautiful plains and even mountainous areas that we didn’t even know existed in Texas… but Texas is just HUGE!  Lots of sight-seeing was done from the truck, with plenty of pit-stops and walking around when we spotted something of interest.  The fun thing about traveling like this is that there is no agenda to follow… we stopped when we wanted to… or when DADDY wanted to.  Sometimes it was hard to get Daddy to stop.  It didn’t take long for BOTH Mummy and Daddy to realize that they had not planned enough overnight stops in this trip, and they were spending MANY MORE HOURS a day on the road going from one campground to the next.  By the second week they were road-tired but nothing could be done now… all of the reservations had been made in advance and we had to keep moving forward.  This would be the FIRST real lesson that we would learn when we planned our next big trip.  Don’t overschedule your trip.  Plan on four to five hours of driving between campsites, and when possible, spend at least two nights at each location.  We were headed deeper and deeper into the great Southwest.  We had new sombrero hats so that we fit in with the locals and all was right with the world… but we were headed to UFO country!  YIKES.  I hope that no one would be captured by aliens!!!

Yes… we women know that. But a man has to suffer first before giving in to a woman. We would play this hand out, but Mummy would win in the end. 🙂

So much for being “way past the stroller days!!” LOL!! I’m glad that Katie recovered quickly.
Kisses from Lucy & Maggie!

We weren’t quite finished discussing that stroller. Daddy just needed to get miserable ENOUGH before he was on the same page as Mummy. He still needed to make himself suffer a little more before giving in. Things would have been sooooo much easier if he had just listened to Mummy in the first place. 🙂

Oh I found out advantages to strollers long ago though people seem to think you are crazy putting a dog in a stroller that dogs need to walk! smh I just am not comfortable with little dogs walking in crowds too much can happen and it’s not good either! I only have the normal size one so only 1 doggie can fit in my stroller but usually I’m only taking 1 along. LOL It’s hard with 4 LOL

Love love love my stroller, And I so agree with not over scheduling unless you just have to. Might as well enjoy your vacation!