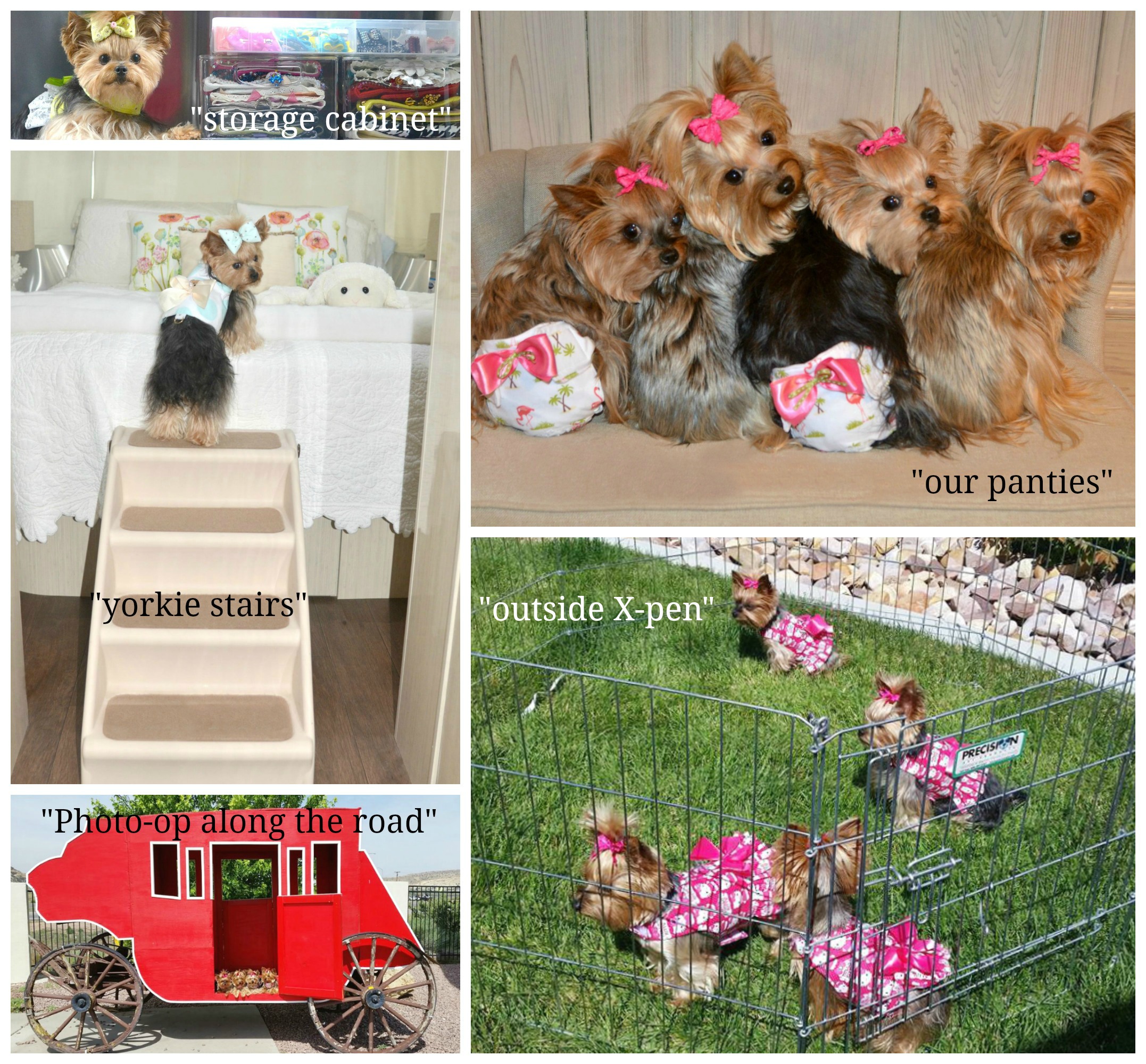 We had only been home from the “Yorky Jamboree” for a few weeks when it was time to leave on the biggest trip we had ever taken as a family.  We were planning a HUGE trip out west in our AIRSTREAM… one that would take us from the Atlantic Coast to the Pacific Coast and back home again, in six weeks.  Oh my goodness.  I sure hoped that we had that trailer stocked properly.  Mummy had packed all of our doggie harnesses in the long cabinet above the big bed.  This had been PRIME storage space, so we felt honored to have scored the entire cabinet, but Mummy told Daddy that it would be best for ALL of our things to be kept in one place, so we stayed organized.  Our clothes were up there, as well as our food and panties.  Panties.  Yeah, those.  We would be using PANTIES while we stayed in the trailer, because due to the lack of floor space, there was just NO ROOM to put down a pee-pad… and even if we could find room, Mummy felt that with FOUR YORKIES, the smell would eventually overtake the trailer.  Panties would be the best solution for our family.  We had them custom-made so that the fit was perfect and then each panty was lined with a little “Poise” pad.  If/when it became wet, the pad could be thrown away and the damp panty could be easily washed.  Daddy wasn’t thrilled about the whole panty idea because he thought his days of WET PANTIES were long-since over, but in the end, even HE was happy with how well it all turned out.

We needed to do one last thing, and then we were ready to go… we had to have one last check-up.  Daddy volunteered to take us to the vet, and make sure we were in good shape and up-to-date on our shots.  We needed a copy of our shot records because some of the campgrounds DID REQUIRE this information for every dog staying on the property.  The vet did a quick “once-over” on all of us, and when he got to me he looked up at Daddy and said, “Little Millie has a loose tooth!”  THE HECK YOU SAY!!!  The psychic in Cassadaga mentioned this MONTHS AGO!  “It’s her bottom left tooth.”  I almost passed out from shock!  My eyes rolled back in my head for a second, like a little baby doll… I couldn’t really think of a single thing to say.  This had all been foretold by that crazy lady who saw spirits!!!  “It’s so loose I think I can just pull it out right here.”  And with that… WHAM, BAM, THANK-YOU, MA’AM… my tooth was sitting in the palm of his hand.  It was all over before I had a chance to even react.  I might have BITTEN him if I had known what he was gonna do, but it was too late now.  Shucks.  I would catch him on another day.  He did mean stuff to me all the time… like sticking things in my bottom, putting stuff down my throat, pulling the hair out of my ears, poking needles in my shoulder.  I’ve got your number, DOCTOR!

Everyone was healthy, my loose tooth was a thing of the past, and we HIT THE ROAD for some high adventure.  We drove for many hours a day to reach each new campsite, but we were perfect little travelers.  We LOVED being inside our AIRSTREAM as one big family.  Mummy had purchased a set of folding stairs so that we could easily get onto the sofa by ourselves.  We had the hidden cubby to duck into when we needed some quiet time, and there was also a little floor rug next to the big bed if you REALLY wanted to get away… like into another room!  Yes, we pee-pee’d in our panties all the time, but it was better than peeing on the floor.  Mummy always had panties drying on a rack in the shower, despite being taken outside to potty numerous times a day.  It seemed like SOMEONE, out of the four of us, just didn’t need to potty during the outside breaks… so they would wait until the panties were put on and THEN decide that they needed to go.  SHEESH!  We had an X-Pen with a mesh cover set up just beside the trailer.  It was the perfect place to “do our business” and still stay protected from the other doggies that were often running loose in the campgrounds.  Whenever we played outside in our pen, we attracted a LOT of attention from the other campers!  You would think that no one had ever seen four little yorkies wearing matching harnesses and hairbows before!  Our outfits… yeah… those were the drawing card.  We were asked soooo many questions about our outfits.  At first, people thought that Mummy and Daddy were in the “puppy business” and wanted to know how much we were.  When they were told that we were not for sale, everyone was sad.  “What about the little outfits?  Do you sell THOSE?”  No, replied Mummy… we don’t sell those either.  We DO have a cookbook for sale though… and part of every sale goes to a RESCUE or SHELTER GROUP that we support.  Well, HOT DOG!  They almost always wanted one of those, so we were raising money for a good cause as we were on vacation… how COOL is that?!?!?!

Before we left home, I had posted our itinerary on my Facebook page and said that if anyone in the cities we were visiting would like to meet-up with us, we would be happy to try and arrange something.  Before we knew it, we had a LONG LIST of people that we had never met, wanting to see us.  Most of them had been “friends” on my Facebook page for so long that I felt I already knew them… they were the FAMILY I had never met.  This would end up being the BEST PART of our trip… the meet-ups.  Even Daddy enjoyed it, because lots of times, other daddies came along and that gave him someone to talk to!  Sometimes we met at our trailer for drinks and appetizers, and sometimes we met at a local “dog-friendly” restaurant.  It was hard keeping all of the cities and friends organized.  Usually, the day before we arrived somewhere, Mummy would get on-line and begin contacting the people who were interested in meeting us.  Sometimes it would just be a couple of people, but often it was lots more.  Contacting everyone was time-consuming because Mummy didn’t have their email addresses, she just had to send a “private message” to each person… but as would be the case on many occasions, they weren’t “ON” Facebook at the time to GET the message, so several more messages would have to be sent.  As soon as someone responded, Mummy would cross their name off the contact list and move on to the next person.  WHEW!  We missed seeing a few friends, but we did the best we could in the time that we had in each location… after-all, we WERE on vacation and there were “tourist sites” that we needed to see as well.  We were having so much fun, we never wanted to go home!  Then we got to Texas, and Katie got sick.

Oh no…poor Katie! Now I can’t wait for the next installment! Kiss Kiss!

I remember your vacation. We tried to meet you too. But we were on the move so much with work and so it just never happened. Maybe some day we can meet up.

Traveling in the Airstream is so much fun! Seeing new places and having everyone together! I was so happy I got to meet you last year! I hope you come back to Pennsylvania again and get to spend more time! So many things you didn’t get to see!

love reading about your travels