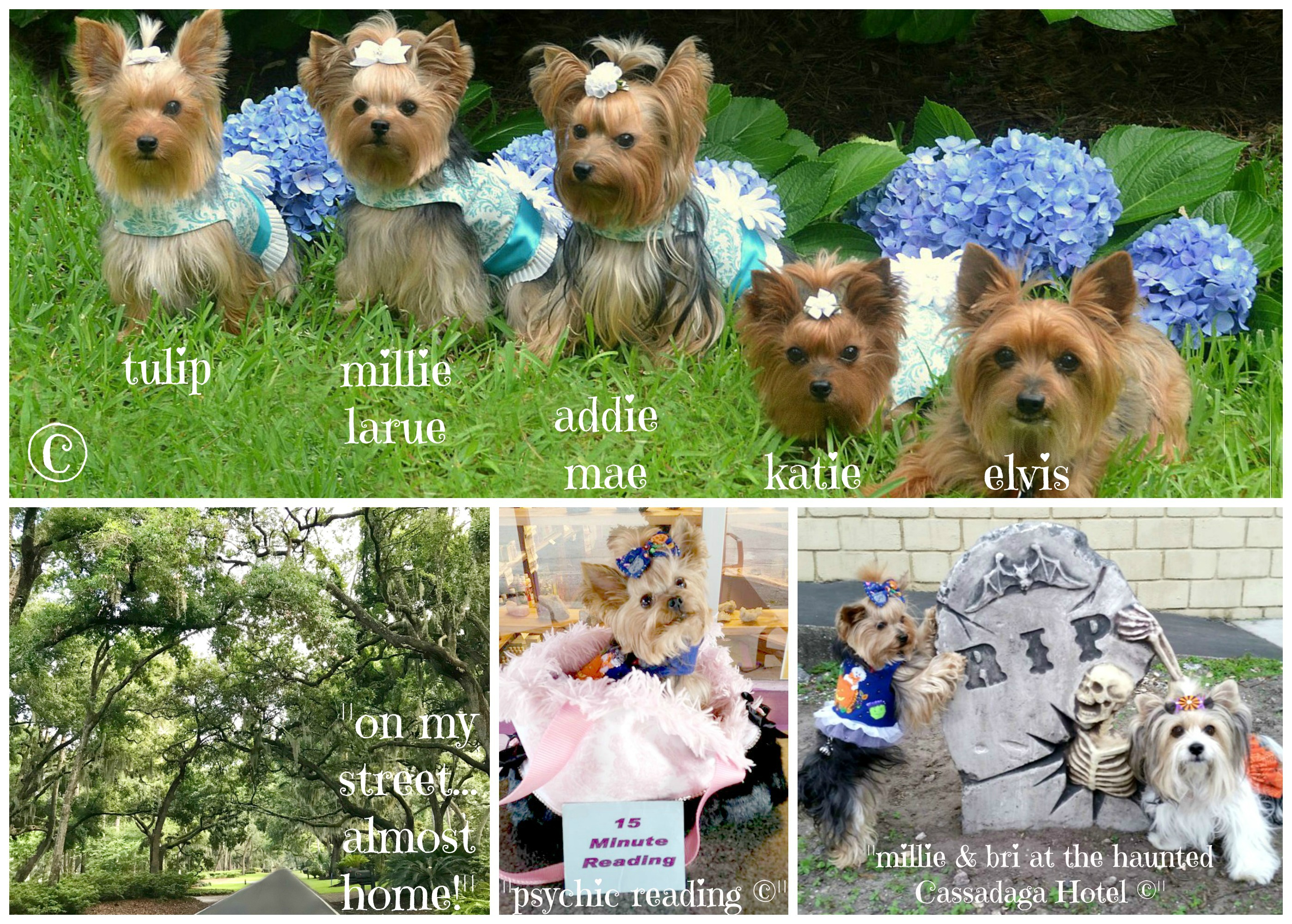 I was home from my month-long visit to Paris, France and trying to re-adjust to being one of FOUR furbabies, instead of the ONLY furbaby.  Let me tell you, having ALL of Mummy’s attention for so long, and then needing to SHARE, was not easy.  My sisters were stealing my toys or invading my personal space and no one even cared.  I was constantly on thin ice and needed to be careful where I placed my next paw.  Low growls were ever present from ALL OF US, and it seemed that trouble was always brewing… but I wasn’t going to be sucked into that vortex.  I would re-claim my spot as the ALPHA DOG of our house, but it would be painful.  Mummy tried to “shame me,” but I turned a deaf ear to it all.  I had been excited to come home and see my sisters, but Tulip should have known that the spot she took over was only temporary… plus, I just didn’t care what anyone thought.  Tulip had over-estimated herself by thinking she could keep the position, and with constant perseverance, I won in the end.

Things crawled along at a snail’s pace compared to what I had been used to in Paris.  By the end of the summer, I was really missing my best friend Bri, and Mummy said that we could go for a visit if I wanted to.  Are you kidding me?  I was on that like a mouse on a piece of cheese!!!  So around Halloween, Mummy and I packed up the car and headed down to Florida.  Bri and I greeted each other like all best friends do… with sniffs, licks and running in circles.  I brought along Mr. Moustache so that Bri could see him again, since I had actually stolen him from her in Paris.  She didn’t even care though… he meant NOTHING to her and EVERYTHING to me.  We had several things planned while I was in Florida.  There was a Halloween party to attend, shopping of course, and lunch with friends… but we had something REALLY SPECIAL planned.  We were taking a trip to the little town of Cassadaga, Florida… the “Psychic Capital of the World.”  I’m not talking just the state of FLORIDA… this is of the WORLD, people!!!  There were “psychics” and “mediums” in Cassadaga, so of course, we would have a “reading” done by the REAL DEAL… not those fake psychics that advertise on television.  OH YEAH… we were on board for this!

The little community of Cassadaga was very small… like one or two paved streets and a few sketchy looking dirt roads.  As soon as you turned off the highway and wound down the back roads, overgrown with foliage, you drove straight into the center of town where the Cassadaga Hotel was located.  There was a post office across the street that was the size of my walk-in closet back home.  The hotel was haunted… so they said.  They claimed that the ghosts were “friendly ghosts” but COME ON… the only friendly ghost that I know of is “Casper” and I didn’t see him or any other ghosts while I was in there nosing about.  We were only visiting for the afternoon and thank the Lord, weren’t spending the night.  The owner of the hotel referred to the place as a “she,” and one of the employees said that she takes care of “her”… meaning the house.  CRIPES!  This reminds me of a movie that Mummy took me to see recently, called “Mother,” which you should definitely NEVER watch… not even for free on Netflix.  It is most definitely the WORST movie ever made and if you insist on watching it after I already told you NOT to, then you deserve the punishment.  Just sayin’.

Bri and I looked around the lobby of the hotel and after not seeing anything psychic, headed across the street to have a “reading” done and our “auras” analyzed.  A 15-minute session was about twenty-five bucks and if you wanted your aura done, that was an extra twenty so we decided to skip the aura.  They produced Polaroid pictures for us, which showed auras of past customers… and sure enough, there were colorful rainbows surrounding the people in the picture.  Hmmm, that did look sort of cool but we passed anyway.  Bri and I had separate readings.  They will actually do PET readings if you want, but Mummy and Ms. Sandra wanted their own readings done and one of the psychics said they would include a “few things” about us in the reading, IF the spirits happened to bring it up.  Say what?!?!?!  Mummy and I were led into a tiny little room that faced the street.  The one window in the room was covered with dark gauzy fabric and the room was painted a really weird, but spiritual-looking color.  The psychic/medium (I’m not really sure what the difference is between the two) who did Mummy’s reading really looked the part too.  There was all sorts of junk, er uh, spiritual stuff, all over her desk and I wondered when this room had last been dusted.  I could feel a sneeze coming on.  Some type of incense was burning in the corner of the room and I guessed it was there to attract the spirits.  They sold bundles of twigs and herbs out in the gift shop, which were for all sorts of spiritual things.  Honestly, the smell was pretty intense and in my humble opinion, I felt this was doing more to drive the spirits OUT… but I was not the professional here, so I didn’t say anything.  The psychic had a little stopwatch on her desk for keeping up with the time.  We only got the 15-minute session and I guess even psychics need to stick to a schedule, but you would think with all their powers, they would just KNOW when the 15-minutes was up and wouldn’t need a stopwatch.  But I’m just a little dog from the “ordinary” world and can’t possibly know the eccentricities of this profession.  CLICK… she started the stopwatch and time was ticking.

She started off by lolling her head about and rolling her eyes from side to side.  You could tell that something was happening here, but we just weren’t sure WHAT.  She told Mummy that there were two spirits in the room with us.  OH MY GOSH!  My hair was standing on end.  One was an old woman, wearing a pair of glasses and knitting… standing in front of us.  GEEZ LOUISE… I had no idea that ghosts could KNIT!  The other spirit was a man, possibly some type of father-figure to Mummy… and he was standing behind us.  Mummy jumped.  The psychic asked Mummy who the people were, but honestly, Mummy didn’t have a clue and she felt it was HER job to tell US who they were.  She asked Mummy if it could be her father and Mummy said, “How the heck should I know!”  Then she focused on the woman and asked if that might be her mother?  “I hope not,” Mummy said.  “She was ALIVE just yesterday!”  The psychic stammered and said that maybe it was a departed teacher that Mummy had once loved.  Ok, that was a stretch but we went with it.  She talked more about the spirits and the spirit ANIMAL that followed Mummy wherever she went… just to watch after her.  CREEPY!  Then she mentioned me!  Well…the man spirit mentioned me.  My ears were now SUPER-TUNED to the conversation.  This was getting SERIOUS.  The man spirit had a message for Mummy, concerning my health.  WHAT. THE. HECK!

Ok, Mummy…that’s just MEAN to leave us hanging like that for another week!!! I want to know what the man-spirit had to say! LOL!!

Psychics really scare me sometimes! ? I heard they ask you questions in a sneaky way to get you to almost give you those answers.

oh my gosh I’m laughing so hard I have tears when the psycho I mean psychic said it was your grandmother! ROFL! I know that she is in Tennessee and you visit her. smh I love your adventures! You really need to be on the travel channel Millie!